The Liberal Party in NSW is confident its push to get more women into federal Parliament will succeed after reaching its target for the proportion of female councillors elected in recent local government polls.

Final results of the December 4 council elections released on Thursday show of the 120 Liberals voted in, 48 were women, with significant swings towards the party in many areas where a woman headed the ticket. 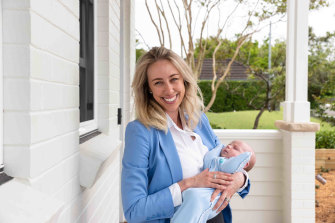 Georgia Ryburn, pictured with her five-week-old baby Harvey, is among a wave of women elected to local councils for the Liberals.Credit:Flavio Brancaleone

This almost doubles the percentage of Liberal women elected to 40 per cent, from 21 per cent in 2017, meeting the goal the state division set for local government in 2019.

It’s part of a wave of women of all political stripes elected to local governments across the state. Councils including Parramatta, Randwick and Woollahra now have a majority of female councillors.

NSW Liberal Women’s Council president Mary-Lou Jarvis, who is also the state division’s vice-president, said achieving the 40 per cent target was the result of four years of “methodical and committed work” to identify women interested in running, and actively mentoring and supporting them.

“It’s the collaborative work of the NSW division and women’s council, with men recognising the need for change,” she said. “Where we’ve had women standing and leading tickets, we’ve had swings towards us. It shows … that where we’ve got women, we win.”

These swings were as high as 10 points in the Hornsby local government area while in Sutherland Shire, a two-point swing in the ward where the ticket was led by Louise Sullivan meant the Liberals got a second candidate elected and gained control of the council.

And in blue-ribbon Woollahra, where Ms Jarvis led the ticket in the Vaucluse ward, the party won a three-point swing to get 63 per cent of the overall vote.

Georgia Ryburn is one of the newly elected Liberals, winning a seat in the Manly ward of the Northern Beaches Council.

She’s looking forward to adding this second new role to her life, having given birth to baby Harvey five weeks ago.

Ms Ryburn, who was the target of a sexist smear campaign during the election, said in dealing with that as well as the broader decision to move into politics she’d found support and encouragement within her personal circle and the Liberal Party.

The NSW division has set a target for half its candidates at next year’s federal election to be women.

“Based on our success with this, we can be confident that when we set targets, they can be achieved,” Ms Jarvis said.

The party has been under pressure to boost its female representation but has long resisted targets or quotas. Prime Minister Scott Morrison flagged in March he was open to targets.

At the moment, about a quarter of federal Coalition MPs are women, compared with 48 per cent for Labor. The ALP introduced a quota for female representatives in the mid-1990s and has ratcheted up the level over the years since.