Offshore wind power proponents say the industry can be the key to unlocking a deal with Nationals MPs over a net zero emissions target as the federal government has still not legalised the industry despite three years of planning.

Billions of dollars worth of wind farms have been proposed offshore from regional industry hubs in Victoria’s Latrobe Valley, Port Kembla and Newcastle in NSW and Gladstone in Queensland. 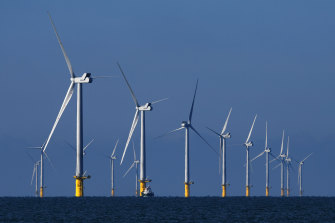 The federal government announced in January last year it would enact laws for the industry to open by mid-2021. But the laws are yet to pass Federal Parliament and regulations aren’t expected to be finalised until mid-2022, a parliamentary inquiry heard on Friday.

Prime Minister Scott Morrison is aiming to announce a commitment for Australia to reach net zero emissions by 2050 ahead of the United Nations climate summit in November, but he needs the support of the Nationals, the Coalition’s junior partner.

Nationals leader Barnaby Joyce and his MPs say their support depends on the government presenting a plan that shows how rural and regional economies will be protected from job losses during a low emissions shift.

Nationals Senate leader Bridget McKenzie said on Sunday she was “yet to be convinced” because she had not seen the plan.

“We’re less than four weeks from Glasgow and modelling on the implications of this over the last decade has shown that it’s regional Australia, our industries, and indeed the poorest in our country who will pay the price for low emissions future,” Senator McKenzie told Sky News.

Energy and Emissions Reduction Minister Angus Taylor introduced a bill to Parliament in September to legalise offshore wind, arguing the industry would “deliver significant local benefits to all Australians.”

Mr Taylor told the Herald and The Age on Sunday the sector “represents a significant opportunity for Australia, with the potential to create thousands of skilled jobs and increased competition in electricity generation”.

Labor climate and energy spokesman Chris Bowen accused the government of “standing in the way of offshore wind”, which he said could deliver jobs in the regions.

“Offshore wind is jobs-rich and has opportunities across steel and manufacturing supply chains,” Mr Bowen said.

Star of the South off the coast of Gippsland in regional Victoria is one of the most advanced offshore wind projects in Australia. It plans to invest more than $6 billion in the local economy over the life of the project and to generate 3000 jobs. The company is preparing plans to transition workers from the Latrobe Valley Yallourn coal plan.

”We look forward to providing thousands of job opportunities for workers, including those in local coal-fired power stations and the local offshore oil and gas industries,” said Star of the South chief executive Casper Frost Thorhauge.

Clean energy think tank Beyond Zero Emissions analysis of overseas wind farm projects shows one job created in offshore wind creates another eight onshore due to the need for local construction for some turbine components and through the supply of cheap energy to industries.

“Offshore wind is key to unlocking the future of industry in regional Australia, with the supply of high quality, long duration renewable energy,” said Beyond Zero Emissions head of policy Tom Quinn.

Latrobe Valley power plant worker Tony Wolfe said the coal industry would decline over the coming decade and welcomed the jobs potential for his region in renewable projects such as Star of the South.

“Obviously the new jobs that are going to be created with the new technology probably won’t be as well-paid and definitely won’t be as many,” Mr Wolfe said. “It’s not going to be as big, but surely any jobs are better than none if you let that sort of industry escape to other areas. With a bit of training, the majority of the workers’ skills would be transferable.”