A roller coaster that is said to be the fastest accelerating thrill ride in the world has been shut down indefinitely due to rising safety concerns.

Fuji-Q Highland, an amusement park that’s located near Mt. Fuji in the Yamanashi Prefecture of Japan, announced it will halt the operation of its Do-Dodonpa coaster as the company investigates four injuries that come from riders who got on the attraction between December 2020 and August 2021.

While closed to the public, Fuji-Q Highland will conduct a “safety overhaul,” according to a press release the park issued in late August.

“Currently, the causal relationship between injuries and amusement machines has not yet been confirmed,” the release states. “We would like to express our deepest sympathies to the injured customers and cause a great deal of inconvenience to them, but we will endeavor to investigate the cause under the guidance of the government.”

According to The Mainichi – a Japanese national newspaper, the four riders who disclosed their injuries to Fuji-Q Highland reportedly sustained broken bones.

The ages of the riders range between somewhere around 30 and 50, according to details revealed by the Yamanashi Prefecture government, The Mainichi reports. 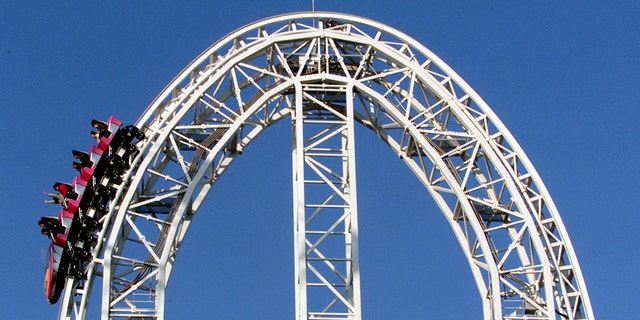 Fuji-Q Highland, an amusement park that’s located near Mt. Fuji in the Yamanashi Prefecture of Japan, announced it will halt the operation of its Do-Dodonpa coaster as the company investigates four injuries that come from riders who got on the attraction between December 2020 and August 2021.
(Yamaguchi Haruyoshi/Corbis via Getty Images)

Reported injuries allege bones were broken in some of the riders’ backs and necks.

The Mainichi states that at least one woman in her 30s might have experienced an injury from being improperly seated on the ride during her December visit.

The Do-Dodonpa coaster is an eight-person ride that lasts about a minute long, according to Fuji-Q Highland.

It reaches a max speed of 112 mph in less than two seconds and travels down a 4,081-foot track that’s filled with loops and turns. The roller coaster’s vertical tower reaches a height that’s nearly 174 feet tall.

The roller coaster first opened to the public in 2001 and underwent a renovation in 2016 to replace its top hat and increase its acceleration speed from 107 mph to 112 mph.

Representatives for Fuji-Q Highland and Sansei Technologies did not immediately respond to FOX News’ request for comment.

While Fuji-Q Highland’s Do-Dodonpa coaster is one of the fastest accelerating rides in the world, the world’s fastest roller coaster is located in Ferrari World, an amusement park in the United Arab Emirates.

Ferrari World’s Formula Rossa can reach a top speed of 149.1 mph, according to the theme park.