Home » Music » A timeline of all of the monolith appearances and disappearances in Utah, Romania, and California

A timeline of all of the monolith appearances and disappearances in Utah, Romania, and California 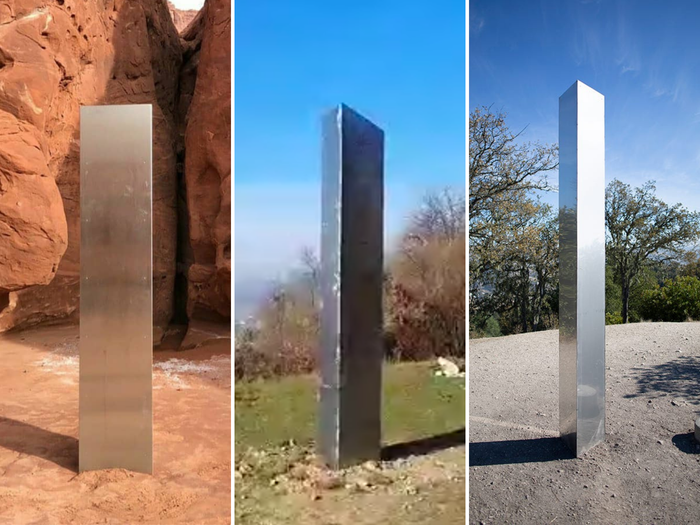 Monoliths have dominated social media chatter over the past several weeks after one first appeared — and disappeared — in a remote part of southeastern Utah.

In the weeks since its discovery, another monolith appeared and disappeared in Romania, and yet another appeared in California. Their origins remain a mystery, making the structures subject to worldwide fascination.

In that time, there's been a fair amount of theorizing around the phenomenon. Are these part of a well-orchestrated prank, a message from alien civilizations, or an homage to Stanley Kubrick's 1968 film "2001: A Space Odyssey," which features a series of monoliths? Maybe their purpose isn't quite so celestial: it could just be a marketing stunt.

Here's a timeline of all of the appearances, disappearances, and events surrounding the curious objects.

The first monolith was discovered in Utah on November 18. 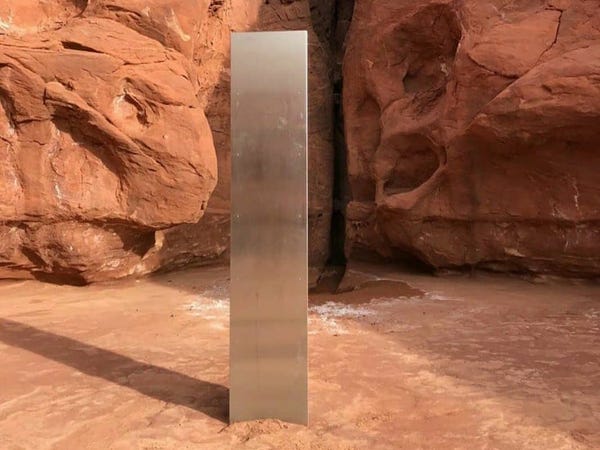 Per the statement, the crew landed after spotting the object to investigate, finding the nearly 12-foot-tall monolith "installed in the ground in a remote area of red rock" with no clear indication of its origin.

At the time, the Utah Department of Public Safety did not publicly disclose the location of the monolith given that it was in a remote area, stating that "there is a significant possibility [those who attempt to visit] may become stranded and require rescue."

The structure was installed illegally on public land, according to a United States Bureau of Land Management statement.

On November 24, the Bureau of Land Management joked about the monolith's speculated extraterrestrial origins in a statement posted to Twitter.

"Using, occupying, or developing the public lands or their resources without a required authorization is illegal, no matter what planet you are from."

Insider reported that the monolith appeared between summer 2015 and fall 2016.

Insider reporters Haven Orecchio-Egresitz and Aylin Woodward wrote that, based on Google Earth imagery, the monolith appeared to have been erected sometime between August 2015 and October 2016. There was still no indication of where the structure may have come from.

That information muddies one popular theory regarding the monolith's origin — some hypothesize that it was created by the late sculptor John McCracken, who died in 2011.

The monolith was removed on November 27. 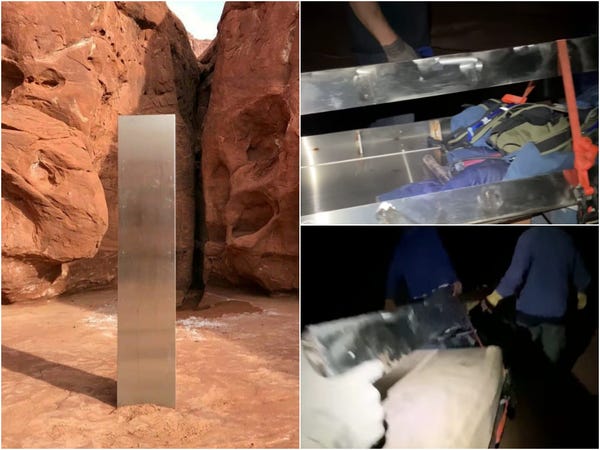 According to a statement from the United States Bureau of Land Management (BLM), an unknown party (at the time) removed the monolith in Utah on November 27, stating that the BLM had not removed the structure itself.

In a Facebook post, the Utah Bureau of Land Management said that the monolith was private property (although the land it resided on was public) and that the local sheriff's office was responsible for investigating crimes involving private property rather than the BLM.

BASE jumper and extreme-sports YouTuber Andy Lewis later posted a 23-second video on YouTube on December 1 claiming to show himself and his "team" dismantling and removing the monolith. In a statement to Grit Daily News, Lewis and Sylvan Christensen, who both take credit, said that they and others had removed the monolith because it was drawing visitors who were ruining the natural landscape.

According to USA Today, Lewis and Sylvan advocate a "Leave No Trace" philosophy towards engaging with nature. "Leave no trace" is a set of best practices for enjoying and protecting natural environments.

That account aligns with that of photographer Ross Bernards, who posted about seeing a group of four men removing the monolith that night. A photo that he posted on Instagram (the fifth in this group) matches the video that Lewis posted.

A second monolith appeared in Romania on November 27. 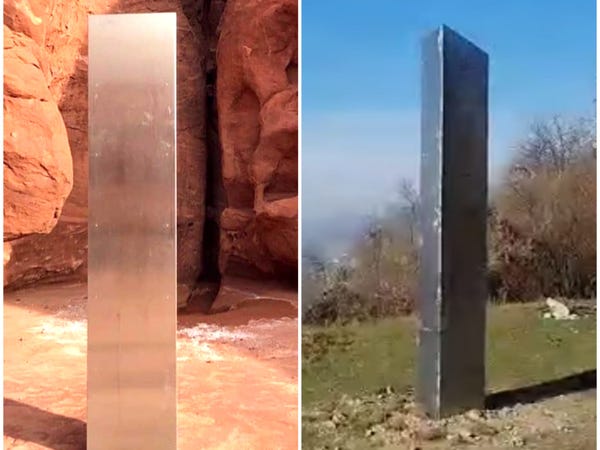 The two structures are strikingly similar but bear some differences. While both structures were reported to be about 3 meters tall (nearly 10 feet tall), the Romanian monolith was covered in circles while the one found in Utah was smooth.

A video, tweeted by ABC News, shows the monolith in detail.

It's unclear once again where the monolith came from, but Andrei Carabelea, the mayor of Piatra Neamt, also joked that it may have extraterrestrial origins in a statement on Facebook, USA Today reported.

"Piatra Neamț hosts a mysterious object," he wrote, per USA Today. "My guess is that some naughty and terrifying alien teenagers have left home with their parents' UFOs and started planting metal monoliths around the world. First in Utah and then in Piatra Neamț. I am honored that they chose our city."

The monolith in Romania disappeared on December 1. 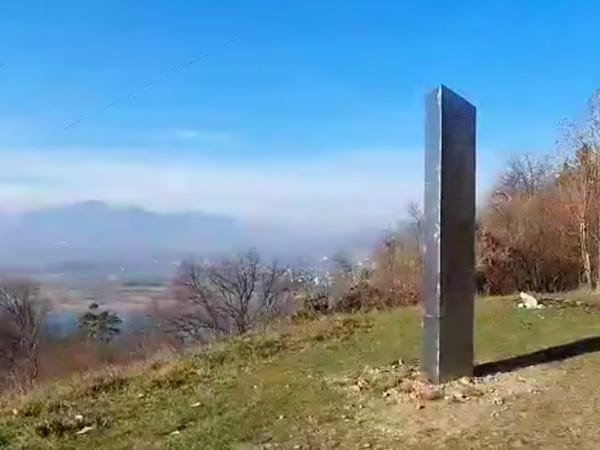 Less than a week after it was discovered, the Romania monolith disappeared overnight, local journalist Robert Iosub of the newspaper Ziar Piatra Neamt told Reuters.

Iosub also told Reuters that "An unidentified person, apparently a bad local welder, made it … now all that remains is just a small hole covered by rocky soil."

Similar to the Utah monolith, the Romanian structure was also installed in a protected archaeological area, Reuters reported.

There's still no definite answer as to who installed, or removed, the monolith in Romania. It's also unclear exactly when it appeared and if it was prior to its discovery on November 27.

On December 2, a third monolith was found in California. 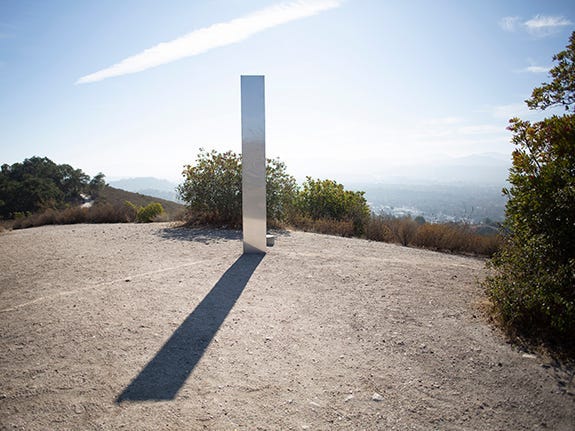 On Wednesday, December 2 — one day after the Romanian monolith disappeared — a third monolith was discovered on top of Pine Mountain in Atascadero, California.

The monolith is visually similar to its predecessors, standing at 10 feet tall and appearing to be made of stainless steel, according to local news outlet Atascadero News. The outlet reported that the object weighted "hundreds of pounds" and was not attached to the ground, warning hikers of a tipping risk.

Once again, the origins of this object are unclear, but daily hiker Ray Johnson told Atascadero News that it hadn't been there on Tuesday.