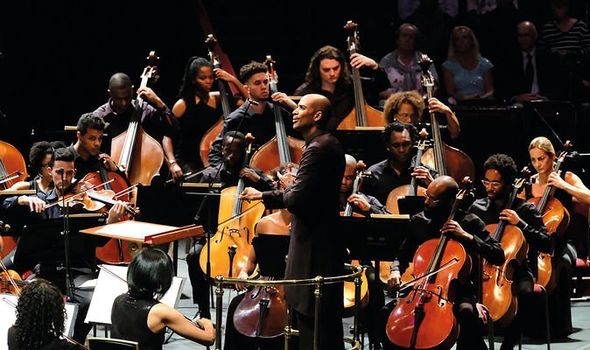 And in a further shock finding the six-year-long study found almost half of all professional classical musicians working in the country today hail from London and the south east with just a tiny fraction emerging from Yorkshire, the North West or Midlands. As part of a new cultural levelling-up drive a major new programme to unlock musical talent in communities across England is being launched today – with a fear that potential superstars are not even getting the chance to try out playing an instrument of any kind.

Chi-chi Nwanoku OBE, Founder and Artistic & Executive Director, Chineke! Orchestra, said: “We will never know the number of talented individuals that might have gone on to achieve global acclaim had they been offered a fair chance regardless of origin or background.”

The Creating a More Inclusive Classical Music report shows that around 80 percent of classical musicians reported that their parent or parents have a degree, and that they grew up in more affluent areas where high proportions of the population attended university.

It also found people from lower socio-economic backgrounds struggle to get fair access to a full range of learning and employment opportunities.

The cost of lessons, of the instruments themselves, accessories such as sheet music, even the cost of travel to lessons and to other related activities and events can all be significant barriers from an early age. The issue is exacerbated by the low pay and unsocial hours that are a widespread feature of the arts.

The Arts Council England project will work with orchestras, music educators, broadcasters, and record labels to help classical music grow over the next decade.

The research published today reveals that children and young people not exposed to Western classical music as part of daily life, or whose families did not have the means or opportunity to support commitment through lessons or study, have virtually no chance of becoming a musician.

Experts insist more needs to be done to open up access and opportunity to become more representative of the nation’s class, geography, disability, ethnicity and gender.

Orchestras, venues and promoters will also be enrolled to ensure a fair and inclusive treatment for everyone working in classical music.

The report includes a survey of over 960 people from the classical music workforce, which revealed that almost half – 44 percent ‑ were born in the South of England ‑ including London ‑ in contrast to 16 percent of respondents born in the North of England ‑ spanning across the North East, North West.

Just one in seven ‑ 14 percent ‑ were born in the Midlands.

Attempting to buck the trend is the Olympias Music Foundation ‑ a music charity that brings together communities in some of the most disadvantaged areas in Manchester.

The charity offers free, sustained and high-quality music provision to those who would otherwise have no prospect of affording private tuition, and they have so little chance of accessing this via school with more and schools closing down their music departments even in more affluent areas.

The Foundation recently launched a new scheme which gives a free instrument and lessons to children for as long as they want it, as well as offering free concert tickets and workshops venues.

They are based in the Longsight district, which is an area in the top one percent of urban deprivation in Manchester, but have just moved into the 422 Community Hub ‑ a Victorian building that used to be a youth club and which has just been brought back to life after lying unused for 10 years.

Since 2015 they have delivered over 2000 lessons to 250 children across Manchester, engaging hundreds more through workshops, community choirs and one-off projects.

When was the last time you listened to a piece of classical music?

It is quite likely it was in an advert or a film. And your favourite pop songs may owe as much to Mozart, Beethoven and Rachmaninov as they do to more recent influences like the Beatles, Madonna, or Motown greats like Diana Ross and Marvin Gaye. That is because classical music is a big part of the soundtrack of our lives ‑ even if we do not realise it.

Classical music is too often seen as the preserve of the privileged in this country. Before I became the Chief Executive of the Arts Council, I was in charge of the radio station Classic FM, where we attracted a huge and broad range of listeners. It proves that there is no limit to the appeal of classical music.

That is something the Arts Council believes in passionately too. We think all music, including classical music, can inspire you, make you happier, widen your horizons and open up opportunities.

Today we are setting out how we will help more people reap those benefits ‑ whatever their background and wherever they live.

It comes after research we commissioned that looked at which youngsters are learning to play orchestral musical instruments, who goes on to study those instruments at the highest level to perfect their skills, and who is currently making a living through classical music in England.

What it showed is that if you are from a less well-off background you will struggle to get fair access to training, learning, and jobs in classical music.

You are also far more likely to get on in the classical music world if you grew up somewhere where most people already go to university.

We are working with those with a stake in classical music like orchestras, music educators, broadcasters and record labels to change that. And we will also be looking at how we can widen the audience for this kind of music too.

The new Culture Secretary Nadine Dories has challenged the arts world to make sure that there are more of these opportunities for young people from all backgrounds to reach the top of our industry ‑ especially for children who are born into families where money is scarce.

So, we are setting up a major new project in the Midlands that will work with talented young musicians who might otherwise struggle to get a job in classical music.

It will help break down barriers and give them a real chance to carve out a career in music, whether that is as a member of an orchestra or as a studio engineer.

I often say that talent is everywhere but opportunity is not. We are already supporting amazing programmes and groups to change that across the country.

During the pandemic, Orchestras Live’s Share Sound project brought together professional orchestras with 250 young musicians from across the North, Midlands and East Anglia.

They worked remotely and digitally to compose, produce, perform and record new music. Some of those young people had never had the chance to be part of a youth music group before.

And then there are initiatives which help hundreds of talented children get the musical instrument lessons their families might otherwise struggle to pay for.

They include the London Music Fund scholarships – set up by the Prime Minister when he was Mayor of London – and the Furthering Talent programme run by Awards for Young Musicians which works across the country.

Our classical musicians, orchestras and composers are already admired across the world. Now is the time for us to build on that heritage, by making sure that everybody’s talent has the opportunity to be heard. That way, classical music will become truly reflective of all the talent England produces.

Classical music is already a big part of the soundtrack of our lives ‑ let’s give more people the opportunity to be part of it.