Home » Music » Barbie discussed white privilege in a vlog, and viewers are applauding the doll brand for confronting racism

Barbie discussed white privilege in a vlog, and viewers are applauding the doll brand for confronting racism 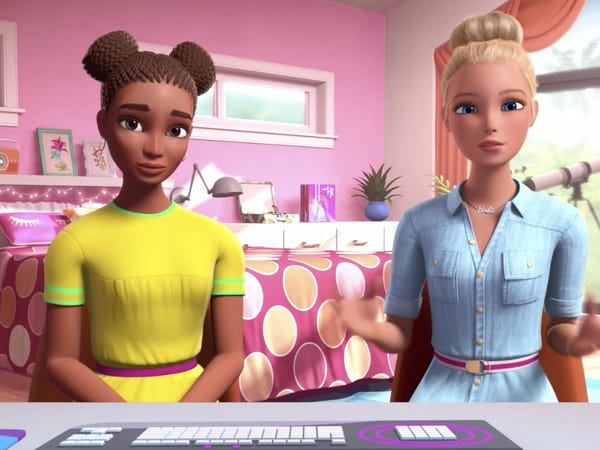 Yes, that Barbie — the beloved doll, who also stars in animated vlogs on the brand's official YouTube channel.

On Wednesday, the brand uploaded a video where Barbie talks about white privilege with her friend, Nikki. The video, "Barbie and Nikki Discuss Racism," starts with Barbie introducing the topic of racism.

"Millions of people are standing up across the world to fight against racism, and they're doing this because for too often and for such a long time, people have been treated unfairly, and in some cases, even hurt by others because of the color of their skin," Barbie says. "This stuff isn't easy to talk about, which is exactly why we have to talk about it."

Nikki then goes on to speak about times that she was wrongly targeted or treated unfairly for being Black.

"Barbie and I had a sticker-selling contest on the beach last month," Nikki says. "We split up and went our separate directions to see who could sell the most. While I was on the boardwalk, beach security stopped me three times. The security officer thought I was doing something bad, even though I was doing exactly the same thing that you were doing."

Nikki also talks about an instance at school, where she was joining a French honor club, and a teacher claimed that she was only there because she "got lucky" on a French entrance exam.

Barbie then chimes in, asking: "Why didn't you just stay in the club and prove him wrong?"

"I don't want to constantly prove and reprove myself. He supported you right from the beginning and he didn't support me," Nikki says. "Usually when I talk about these things, people make excuses. They say things, like, 'Well, maybe you should have had a permit for selling on the beach.' But those are just excuses. People did these things because I was Black, and they made the wrong assumptions about me."

Nikki then says to Barbie: "You listening and being supportive? That's helpful."

Barbie's YouTube video went viral shortly after it was shared

Some viewers of Barbie's conversation on racism shared via Twitter that in their opinion, the toy brand "overstepped" with its latest video.

Other users shared that they were pleasantly surprised to see the decades-old doll character tackling the topic of white privilege.

One user joked that the Barbie character "snapped" with her vlog where she confronts racism.

Viewers also commended the makers of the video and how Barbie seemed to allow Nikki to share her experiences without interrupting.

While some viewers were surprised at Barbie's anti-racism video, the doll character is no stranger to tackling social issues

The Barbie brand's YouTube channel is full of upbeat content, from cooking tutorials (see: "How to Make Lemon Cake with Barbie") to videos that follow the animated character Barbie in and around her Dreamhouse.

But the brand has also tackled other hard-hitting issues tailored for its audience.

For example, in July, the animated version of Barbie faced the camera for a vlog where she opened about her "honest thoughts" and confronting feelings of anger and sadness.

In recent years, the Barbie doll brand — which was founded in 1959 and is now owned by Mattel, Inc. — has aligned itself with the message of empowering kids and encouraging young people to be active in their communities.

Barbie's YouTube channel and its recent video about racism is one example of the brand's attempt to remain relevant and appeal to families who want their kids to be engaged in conversations about the world around them.

Specifically, the brand has released a line of STEM-themed Barbies, including Computer Engineer Barbie, and recently launched a collection of dolls centered around civic engagement in partnership with She Should Run, a nonprofit that helps women run for office.

Representatives for Mattel, Inc., did not immediately respond to Insider's request for comment.