Billie Eilishs Fairytale Gown Was The Talk Of The Met Gala

Billie Eilish’s Met Gala look has us dying to meet her fairy godmother, because her dramatic transformation was better than Cinderella’s. Faster than you can say “bibbidi-bobbidi-boo,” thousands of compliments flooded the Twitterverse when the first pictures of her dazzling look began circulating on Monday.

“Billie Eilish with the glow up of the century,” tweeted one fan, who shared a photo of the “Therefore I Am” singer as a young teen juxtaposed with a picture of her Met Gala look. “Billie Eilish looked BEAUTIFUL however this was a MAJOR moment for her she really wore a dress…she’s really growing to be comfortable with herself I’m so Prada her for doing this like this is really a big deal,” wrote another admirer. We’re not sure if the fashion pun was intentional, but Eilish’s dress wasn’t a Prada piece — it was designed by Oscar de la Renta.

Eilish, who acted as a co-chair at the event, proved that she has a supreme amount of star power by doing something that will have animal rights activists cheering. According to The New York Times, she would only allow Oscar de la Renta to dress her for the Met Gala if the label agreed to stop selling fur. “I’m honored to have been a catalyst and to have been heard on this matter,” she said. We all stan an ethical queen. And speaking of queens, Eilish’s intention was not to look like a royal on the red carpet.

Billie Eilish's style inspiration was not a princess, but this other iconic figure 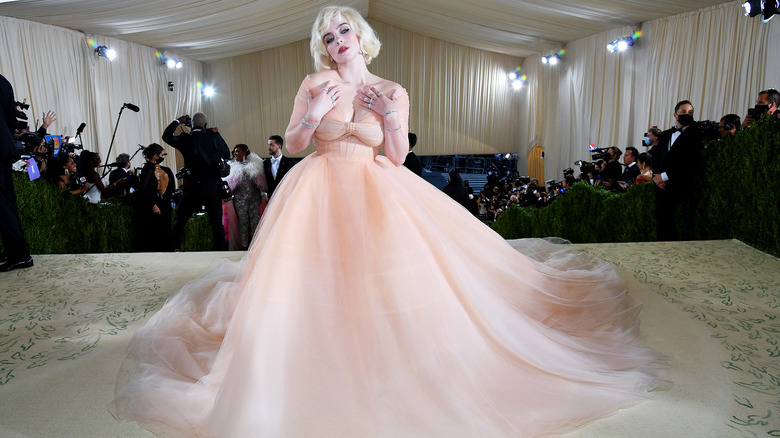 Billie Eilish’s blush Oscar de la Renta gown featured a tulle skirt the size of Cinderella’s pumpkin coach, a 15-foot train, and a corset bodice. The almost cartoonish silhouette made it look like a Disney princess dress brought to life, but the “Happier Than Ever” singer was not inspired by animated heroines hoping for their happily ever afters. As reported by InStyle, she revealed that the gown was her take on the festive dresses adorned by Holiday Barbie. “It was my favorite thing in the world. I would ask for them for Christmas every single year,” she said while chatting with her Met Gala co-host Keke Palmer. Eilish also rocked Barbie-blond hair, but channeled a little more Marilyn Monroe with the short style and diamond jewels.

While Eilish has spoken out about struggling with body image issues before, her Barbie look is her way of showing everyone that she’s loving her body a lot more these days after shedding her baggy Gucci ensembles. “I was just scared and didn’t feel comfortable in my skin, and I feel like I finally did,” she said at the Met Gala, per InStyle.