It's 1pm and American country-pop artist Kacey Musgraves is sitting in one of the Enmore Theatre's dressing rooms, fighting off exhaustion and a cold that, she says, may even prevent her having her regular shot of tequila before taking the stage.

In a few hours' time the 30-year-old will perform in front of a sold-out audience that defies description –  teenage girls will be standing alongside indie hipsters and ageing country music fans; there's also a large LGBTI contingent, many resplendent in pink cowboy hats and some waving miniature rainbow flags, a reflection of Musgraves' unwavering advocacy of the community.

"I have a pretty high tolerance for working hard and travelling and coasting on the excitement of everything," she starts, her words resonating with a slight Texan twang. "But man, woo, it's starting to really catch up with me. I'm feeling kind of tired these days." 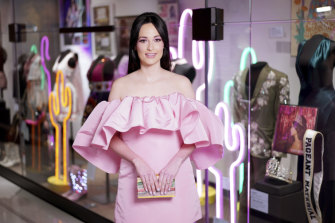 Kacey Musgraves at the opening of a new exhibit on her work at the Country Music Hall of Fame and Museum in Nashville.Credit:Donn Jones/Invision/AP

Dressed in a white T-shirt, black parka, loose-fitting black pants and black slippers, her septum pierced with a thin silver ring, her long black hair cascading over her shoulders, Musgraves does not do relaxing well.

"I always feel like I have to be filling my time with something," she says, swigging from a bottle of water. "My therapist tells me, 'If you're sitting down to watch a movie, just watch the movie. Tell all the monkeys to get back in their cage and enjoy what you're doing in the moment.'"

Musgraves has spent much of the past 12 months on the road in support of last year's Golden Hour album. Though she was already a success in the country music sphere – her 2013 major label debut LP, Same Trailer Different Park, beat out Taylor Swift for the Grammy for Best Country Album; 2015 follow-up Pageant Material was also nominated – Golden Hour has taken things to a different level.

Skewing more to '70s West Coast-inspired soft pop than the country leanings of her previous two albums, it also features modern production ticks such as vocoders and, on the jubilant High Horse, even ventures into Daft Punk territory.

The unabashedly optimistic album celebrates everything from the wonders of nature to the love of her husband.

It's connected in a big way, winning four Grammys including Album Of The Year, for which mainstream big hitters such as Drake, Post Malone and Cardi B were nominated. (It also won Best Country Album, though that's surely a reflection of where she's come from than her current sound.)

The unabashedly optimistic album which, perhaps not coincidentally, she started writing in 2016 as Donald Trump was ascending to the White House, celebrates everything from the wonders of nature (Oh, What a World) to the love of her husband, musician Ruston Kelly (Butterflies). For a woman who calls herself "a hard optimist paired with a total cynic", the first part of that equation clearly won out.

"It was the perfect atmosphere for a lot of reasons," she says of the album's themes and success. "People needing some real songs that were kind of an escape from all the ugly that we see. And it was the right atmosphere for my own life, too, meeting the right person, turning 30, and all these songs coming out."

Musgraves is no fly-by-night success. Growing up in the tiny Texas town of Golden – population: around 200 – by nine she was writing her own material, by 12 was performing traditional country songs and yodelling at festivals around The Lone Star State, and she released two albums while still in her early teens. 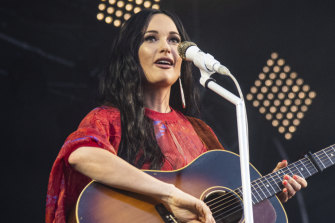 Kacey Musgraves: ‘I never had a back up plan.’Credit:Invision

Her schooling in the nearby town of Mineola was not a priority.

"My parents were really happy if I brought home a 'C'," she smiles, adding that she was regularly in trouble for insubordination. "They were like, 'Oh good! You didn't fail!' But I just knew that this text book in front of me wasn't really what I needed as far as what I wanted to do with my life."

After graduating she moved to Austin and then Nashville, where she paid the bills by dressing up as Disney characters for children's birthday parties, before landing a job as a songwriter.

You can either be here and deal with that, or we don't need to be working together.

Upon releasing Same Trailer Different Park she was instantly lauded as a bold new voice in country music, not least because of her forthright and cleverly constructed lyrics. A fan of arch lyricists such as John Prine and Loretta Lynn, Musgraves' early single Follow Your Arrow established her "you do you" modus operandi, celebrating everything from self-belief to same-sex hook-ups and weed smoking. It also featured the killer couplet: "If you save yourself for marriage/You're a bore/If you don't save yourself for marriage/You're a whore…able person."

It wouldn't be the last time her label requested she change her lyrics so as not to offend the delicate sensibilities of country music radio.

"The classic story of 'we want this to sell more, so let's make it more mediocre for masses to appreciate', and I was never down with that," she scoffs. "That isn't why I got into this business. The enrichment of being able to share who you are and touch people through art is the whole point, so don't take that away from me.

"I've always known to a fault what I wanted," she adds. "So you can either be here and deal with that, or we don't need to be working together." 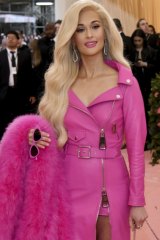 The singer has aspirations that extend beyond music. Her merchandise has branched out to include a Kacey Musgraves colouring book (her mother did the illustrations), and she has a line of rainbow body paint coming out shortly. She's also just struck a worldwide deal with modelling agency IMG, through which she'll be exploring branding opportunities.

Musgraves' Instagram handle may be @spaceykacey, but there is nothing flaky about her ambition.