The relationship between Justin Bieber and Scooter Braun goes way back. The Canadian pop star is currently one of the most well-known artists in the industry. He’s churned out one hit after the next, including “Baby,” “You Smile,” and dozens of others. Bieber also married model Hailey Baldwin, and the two are as cute as can be. But despite the fame that he’s experienced over the past decade, Bieber came from humble beginnings.

Bieber’s mother, Pattie Mallette, got pregnant with the singer when she was just 17-years-old (via the Daily Mail). She didn’t have a ton of support from her family, and many thought she should get an abortion. “I just knew I couldn’t. I just knew I couldn’t. I just know I had to keep him,” Mallette said on the show. “I had to do my best. I had to see what I could do. And I was determined to do whatever it took.”

She went on to share that Bieber’s career quite literally started in the womb. “I know this sounds crazy, but he sounded like he was singing. He did,” she shared. “It was like this, like, ‘A hah, a hah.’ And I was like, ‘Oh my gosh, it is so precious and amazing. I just want to squeeze him.'” Keep scrolling to find out how Braun discovered Bieber, who later became a superstar.

Scooter Braun hit the jackpot when scrolling through YouTube 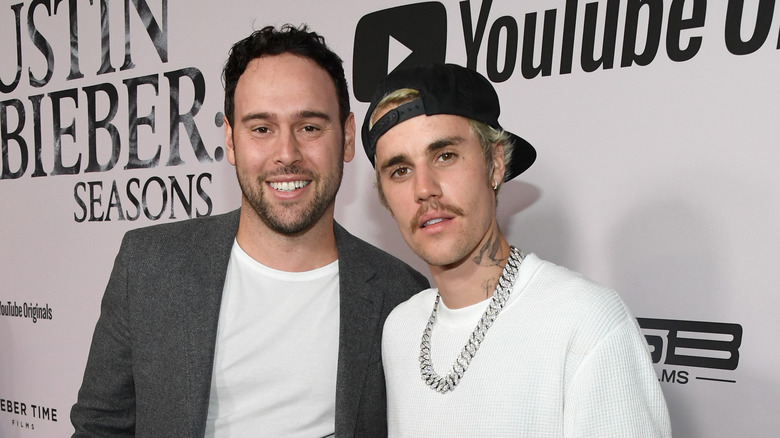 For most celebrities, there is a defining moment in their career when they were discovered. Whether it’s on a talent show, in a random meeting, or on the internet, there’s always that one moment that launched someone’s career. In Justin Bieber’s case, he can thank Scooter Braun. According to Forbes, the reason Braun found Bieber was actually by mistake (probably the best mistake of his life). He came across Bieber when he was looking on YouTube and stumbled across Bieber’s page in 2008.

Braun said that he had many difficulties getting the word out about Bieber, as he didn’t have a background in Disney like Miley Cyrus and the Jonas Brothers. “The obstacles were that people didn’t want to sign him because he didn’t have a Disney or Nickelodeon show, and because no one had ever broken in through YouTube,” Braun told the outlet. “Justin Timberlake had the biggest YouTube star in the world, Esmee Denters, and it hadn’t worked yet. Ryan Lesley had that other girl, and that didn’t work. There was no validly and no proven track record.” Bieber’s talents spread by word of mouth and the rest, as they say, is history.

It’s safe to say that both Bieber and Braun helped pave the way for YouTube stars, as he is one of the most talented and rich singers in the world. We’ll be honest, we don’t really remember a world before the Biebs, and we don’t really want to.