Lido Pimienta is used to being a “first.”

Coming off the heels of a highly praised, history-making performance at the New York City Ballet, Lido Pimienta, a Colombian singer and visual artist now based in Canada, was the first woman of color to be commissioned to compose and sing an original song for the ballet. Pimienta, who is of Indigenous and Black heritage, looks back on that opportunity as a defining moment in her career’s trajectory. “When I found out, it gave me an even bigger sense of pride, determination, and love,” Pimienta tells BAZAAR.com. “I know I’m always going to be the first, and I hope that doesn’t mean that I’ll be the last. I have to keep pushing so that I’m not the last.”

Costume designer Esteban Cortázar was responsible for Pimienta’s ballet debut: a yellow, figure-hugging gown that diverted from the way she typically presents herself onstage, which is playful and voluminous with an air of ingenuity. On the other hand, the colors, makeup, and hair were all still reminiscent of the songstress’s signature performance style. Cortázar embraced Pimienta’s silhouette, a choice atypical of the singer’s style oeuvre. “Esteban was like, ‘You’re so beautiful, I really wanna showcase your boobs, I wanna show your sexy curves—we really clicked,” she says. “So I was like, ‘I’m just gonna close my eyes and let you take me on this journey.” Her intricately braided and B*A*P*S-esque towering hairstyle was created by Lady Soulfly. When I ask her if bringing a very visibly Black hairstyle to the New York City Ballet was intentional, her response was to look directly in my eyes and tell me that “everything that Lido Pimienta does is intentional. Everything.”

Pimienta’s native Colombia—its culture, its people, and its energy—influences the singer every day. “Barranquilla is very fashionable,” she tells me of her hometown. “I think that any Caribbean place is very fashionable—it just might not be fashionable by ‘Western’ or ‘mainstream’ standards.” She paints a scene of a dynamic Colombia, one that is artful, rhythmic, musical, and, of course, vibrant. It is a racially mixed country, one rich with African and Indigenous heritages, so musical genres like salsa, merengue, tambora—those specific to the African diaspora—are continuously ringing throughout the city. There is an inherent elegance to Black style among the diaspora, one that is understood between us everywhere, that manifests regardless of socioeconomic status. A style shaped out of survival or overcompensation due to centuries of anti-Black discrimination, but also as a result of an omnipotent creativity that has always existed among Black folks that influences all corners of society.

Pimienta speaks to this notion while citing a specific memory of visiting family in different remote areas and villages in Colombia. “One of the most striking images that I’ll always carry with me is that you’ll walk down a street where some of the houses are made of mud and sticks, and it’s a Sunday, people are getting ready to go to church, and you will see the children coming out of those houses made of mud and they’re wearing the most beautiful white dresses with the most beautiful white shoes. The cleanest fits, perfect hair. There’s something about dignifying yourself no matter your social condition and respecting yourself.” Being a young woman of that specific experience was one of the biggest awakenings the singer has had with fashion.

There’s something about dignifying yourself no matter your social condition and respecting yourself.

Pimienta’s sartorial presence stretches beyond the stage, however. The striking album cover for her project Miss Colombia depicts the singer as a patron saint of pageant queens while drowning in a hovering, cloud-like silhouette of tulle and silk. Miss Colombia received critical acclaim as a work of spirited lamentations to her home country, reflecting on her experiences as an Indigenous and Black Colombian woman. “The album is really a collection of cynical love letters to Colombia, which embraces the truly beautiful things about it, but also being clear and blunt about the things that don’t work in Colombian society,” she says.

“We don’t have royalty in South America, but we are obsessed with beauty pageants, and someone like me would never make it to Miss Colombia, because I don’t have the height, I don’t have the right weight. But I was like, ‘Guess what? I’m still going to be Miss Colombia.’ So bringing all that together, I thought, ‘How can I make it the most flamboyant? The most gay friendly?’ Bringing all of those visual elements together was a beautiful learning experience, and I can’t wait for what’s about to happen for the next album.” 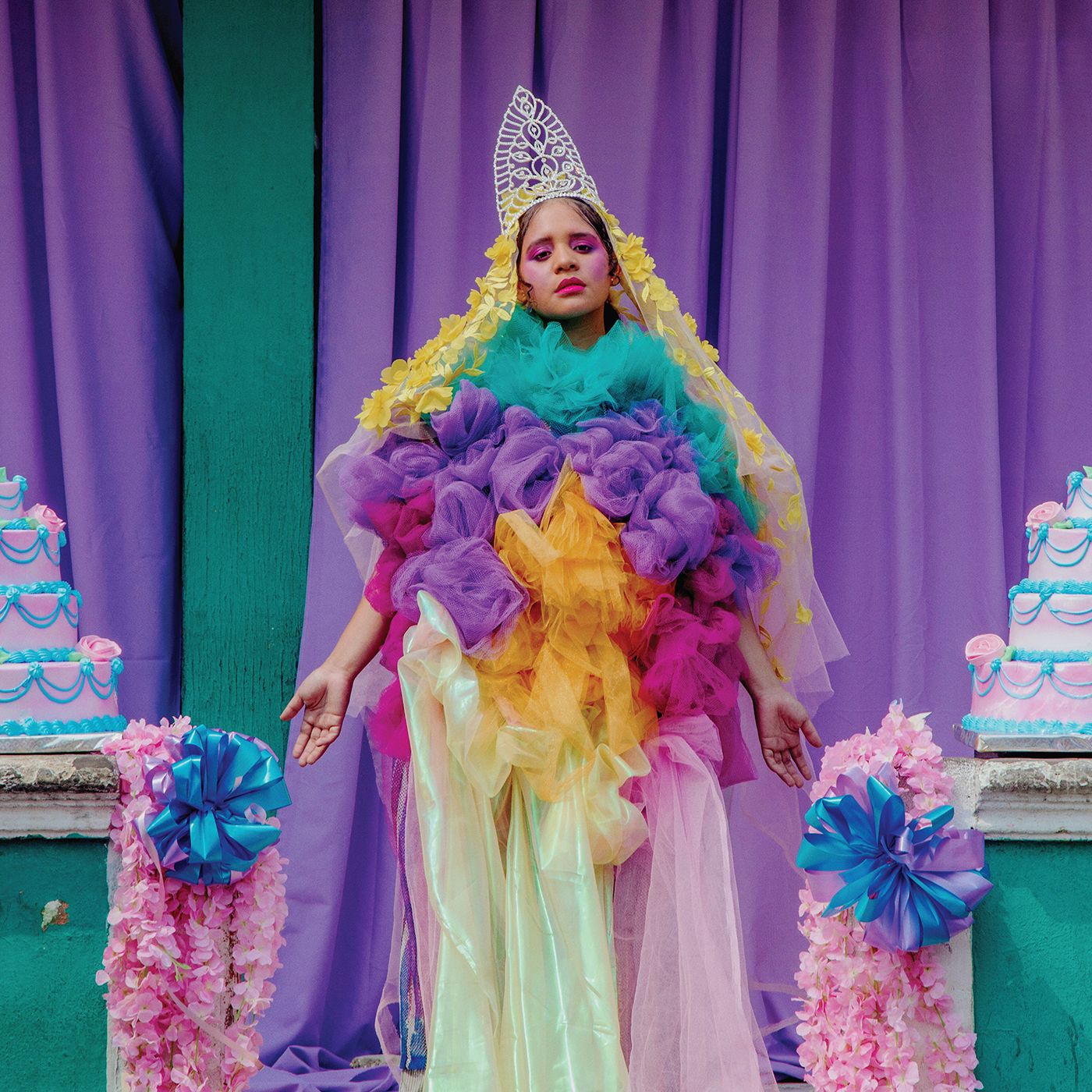 Pimienta prioritizes working closely with brands she is loyal to, like the India-based brand NorBlack NorWhite and Mexican shoe brand Cruda, and is the self-proclaimed muse of another Mexican brand, Les Jesus, a duo that blends traditional Mexican artistry and silhouettes with a modern take. She’s involved in every decision-making aspect of bringing the Lido Pimienta fantasy to life, and she takes it very seriously, calling herself “a student of fashion,” one who keeps up with what’s good and what’s bad, and forms close relationships with designers to strengthen and understand the true essence of collaboration.

There is a certain confection-like spirit to Pimienta’s style, one that involves billowing, undulating, and pattern-clad dresses straight out of a folk fairy tale. It is one that incorporates hair that is typically adorned with ribbons and floral arrangements, and imitates sculpture. She incorporates hallmarks of femininity like extra-long nails as an edge. She wears makeup reminiscent of a moody watercolor painting. And she injects embellishments and accessories into her looks that directly pull from her Indigenous heritage. By choice, Pimienta veers away from things that are “age-specific” or “sexy” by mainstream standards as she navigates the phases of her life with a timelessness, a way to implement her stance on her artistry taking precedence as a public figure. All these things bring forth art in motion for her audience.

Her videos for “No Pude” and “Coming Thru” (directed by Orly Anan with costumes by Les Jesus) are prime examples of this peculiar world that she’s created for herself. While the videos are thematically opposite, both exist harmoniously in Miss Colombia‘s universe: “No Pude” reflects her love-hate relationship with Colombia, which is communicated through a moodier version of herself in monochromatic washes of black and red; “Coming Thru” is brighter and features the singer “surrounded by the abundance of colorful fruits and foods that are to be shared ONLY by the ones who want to protect us,” she said in a statement. If this is the conception of a brand of visual output that stands out so early on, it only makes you wonder what’s next.

“The current state that I’m in, I’m all about beauty with a capital B, so anything that’s going to have you gasping for air—or that makes you gag—that’s what it is,” she says. “I want things that are so beautiful they’re going to make you cry. I want to make music that would be the soundtrack to heaven. An all-encompassing beauty from the sky to the moon to the planets. It’s very much about love and what’s worth living for after all the devastation that we’ve experienced and that we continue to experience. The beauty that things need to have and hold within themselves for them to be carriers of hope. That’s the vibe.”