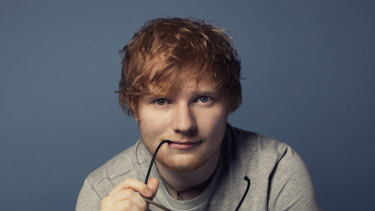 Ed Sheeran's anticipated fourth studio album may come as a shock to fans of his original work, as he here toes the line between pop star and producer. The track-list, which boasts a collaborative line-up of star power comparable to records from Mark Ronson, Calvin Harris and DJ Khaled, sees Sheeran flex his curatorial sensibilities.

It is an exciting departure from the English sensation's usual saccharine ballads. Yes, it's a formulaic pivot to hip-hop that so many pop stars employ at this stage in their careers, but instead of donning a backwards cap and Southern flow himself, Sheeran calls on the help of a few experts.

The PNB Rock and Chance the Rapper-assisted Cross Me is a club-friendly, hip-hop bop that sees Sheeran take a back seat – just a guest feature on his own track. His silvery vocals fill the gaps between braggadocian bars from 50 Cent and Eminem (Remember the Name), Meek Mill and A Boogie (1000 Nights) and Young Thug and J Hus (Feels). But where he seems most at home is on pop jaunts with Camila Cabello, Cardi B and Justin Bieber.

It is unlike anything Sheeran has done before: exhilarating, risk-taking, hip-hop-inflected pop that succeeds at every turn. – Kish Lal

The trick with travelling is to make the journey the adventure, rather than it being the tedium before the destination. This album is one such adventure. In fact there is no destination: just a sonic journey through improbable soundscapes, so it's like continuously rounding bends on a river, where whole new vistas open up, whether of forests, mountains, swamps, deserts or grasslands, and your eyes widen in disbelief.

Here the ears do the widening, as Norwegian composer Oyvind Torvund's suite for the 16-piece BIT20 Ensemble rewinds one's memory, as out gushes music that often could come from panoramic scenes in old westerns.

The implicit layer of kitsch is, however, so fully integrated with innovation, humour and sonic strata referencing staggeringly diverse areas of music that you're buffeted by the gales of imagination as much as being soothed by the swelling strings.

That I've never heard anything like it is thrilling in itself, but the music is also fastidiously executed by the Trond Madsen-directed orchestra, with featured soloists Kjetil Moster (saxophones, electronics) and Jorgen Træen (electronics). Explore the wonders of the world without leaving home. Think how much you'll save on airfares! – John Shand

Being the new project from Slowdive's Rachel Goswell, it's no surprise the Soft Cavalry's debut has plenty of dreamy moments recalling the iconic UK act. But much like fellow Slowdive member Neil Halstead's work, this set strips back the fuzz and distortion for a more folky, dream-pop, melodic bent.

The husband-and-wife duo sees Goswell's other half, Simon Clarke, take on most of the vocal and lyric duties superbly, his gentle, light tone floating above simple arrangements delicately fleshed out by flourishes from synth, organ, flute and more.

Echoes of Slowdive certainly emerge on songs like The Velvet Fog, which has sparking, soaring harmonies from Goswell and Clarke over swirling guitar and keys.

But the highlights don't only lie with the familiar: the sparse, darker Spiders is haunting; the folkie, acoustic The Light That Shines on Everyone is a direct, pretty, bright ballad that's as instantly accessible as it is ethereal and dreamy. The Soft Cavalry aren't reinventing the wheel, nor are they trying to stay in the shadow of Slowdive's iconic Pygmalion, but there's something magical about these two together – and if this debut happens to lull you to sleep, it's a very good thing. – Bronwyn Thompson

This is one of the most celebrated accounts of Wagner's great opera, but I had not heard it until this ultra-budget release on Eloquence.

Recorded in 1981, the Welsh National Opera had given 18 performances with this cast. It was meticulously prepared, conductor Reginald Goodall even rehearsing with individual members of the orchestra, from harp to bass clarinet.

He also worked with his hand-picked singers on the most punctilious aspects of their roles. Then the recording was made in long takes of up to 40 minutes to preserve Goodall's spacious but wonderfully inevitable flow.

The performance deserves just about every encomium I have read over the years: the proportions, balance and line seem so natural, the unhurried tempo allows space and breath. Seldom has a production had so much of one man's stamp on it as Goodall's here.

The Isolde, Linda Esther Gray, is luminous, and, if her Scottish accent has been criticised, my German is not good enough for it to matter. She seemed set for a great Wagnerian career until it was cut short by illness soon after this recording.

John Mitchinson is an ardent Tristan, while Gwynne Howell's warm King Marke is a model for the role. – Barney Zwartz

Hamilton Ulmer grew up the son of eccentric parents who loved making art, but laboured in menial jobs to make ends meet.

Following the deaths of his father, brother and two grandfathers in the space of a year, the San Francisco songwriter has poured his past into his music as Makeunder.

Rustic, finger-picked melancholia? Forget it. From the outset on the maximalist title track, Ulmer bolts rubbery funk to lurching prog-rock guitars and keys, howling, "How do I live with this sadness?" while the music stomps through the speakers.

In Between My Dead-End Jobs examines what his family did to survive, but he approaches it with jumpy Stevie Wonder-style clavinet, a Peter Gabriel-esque big beat and a Princely skinny-hipped wail.

Ulmer may be digging into his psyche, but instead of getting introspective he's stylistically freaking out like Dirty Projectors or Blood Orange, stacking his vocals with slippery, hyperactive harmonies, bending the instrumentation like the sonic equivalent of molten lava, and building beats with electro-handclaps and heavily syncopated whiplash time signatures.

"What do I have to hold onto?" he pleads on Begin in the Middle. And the answer appears to be: "the rhythm and the noise." – Barry Divola

For her fifth album, Melbourne's Emma Russack continues to use a bleak, sardonic sense of humour to distort the recognisable (and cliched) tropes of the confessional singer-songwriter (loss, desire, heartbreak etc) – something so skillfully done on her previous album Permanent Vacation.

This is a good thing: Winter Blues is a witty and literate record that marks a high point for an artist whose career began with YouTube cover versions more than a decade ago. From the expletive-laden opener Horses to the caustic Be Real, a song about self-actualisation through a haircut, Russack displays a charming and nuanced grasp of irony that recalls the self-mocking whimsy of John Grant.

This dryness also serves to make the songs that do wrestle sincerely with emotional upheaval, such as Follow My Heart, all the more powerful. The arrangements and production are fairly restrained, with piano to the fore alongside tinkling electric guitar, while Russack's vocals are effortlessly assertive.

The album's finest songs, such as Keeping My Cool, suggest the influence of Carly Simon and Laura Nyro – although the thick accent and biting satire make this a decidedly Australian record. – Barnaby Smith