Nicki Minaj is back with new music!

After taking a hiatus and returning to social media, the rapper dropped some big news. On Thursday, Minaj hosted an Instagram Live where she revealed that her Beam Me Up Scotty mixtape would be available on streaming platforms for the first time ever. She did note that some songs are not available for various reasons.

“I did a couple new joints for the mixed tapes. This is just to get back to the basics a little bit. To the essence of why I started rapping,” she said, sharing some of the remixes she did and a record called “Fractions.” “And I did another song, this is actually on an original beat, in the freestyle vibe…So that’s all in preparation of the album.”

Also touching on her upcoming album, she noted that “Fractions” is not the lead single but is “very, very important.”

Minaj also got honest with her fans, expressing that she was on hiatus because she was “in mommy mode and kinda went through this writer’s block. She revealed that after feeling stuck, she called up Drake and asked him who had the hottest sound out there. He then sent her the song “Seeing Green.”

After seeing that Drake was watching her Live, she connected with him and they talked about the single. “It didn’t feel right without you being on it…It’s epic this way. You know I had some real heart to hearts lately about how it’s your world and nobody does it better,” Drake praised Minaj, adding that while people love Papa Bear they miss her presence and the “excitement that you bring.”

There was a moment when Drake asked her if he could reveal who else was on the track and Minaj smiled and said no, adding that she wanted it to be “a surprise.” Once the LP was released, fans saw that it featured Lil Wayne.

The mixtape was first released on April 18, 2009, and cemented Minaj as a future icon. The rerelease includes a total of three brand new tracks, including “Fractions,” “Seeing Green” and “Crocodile Teeth (Remix)” with Skillibeng. 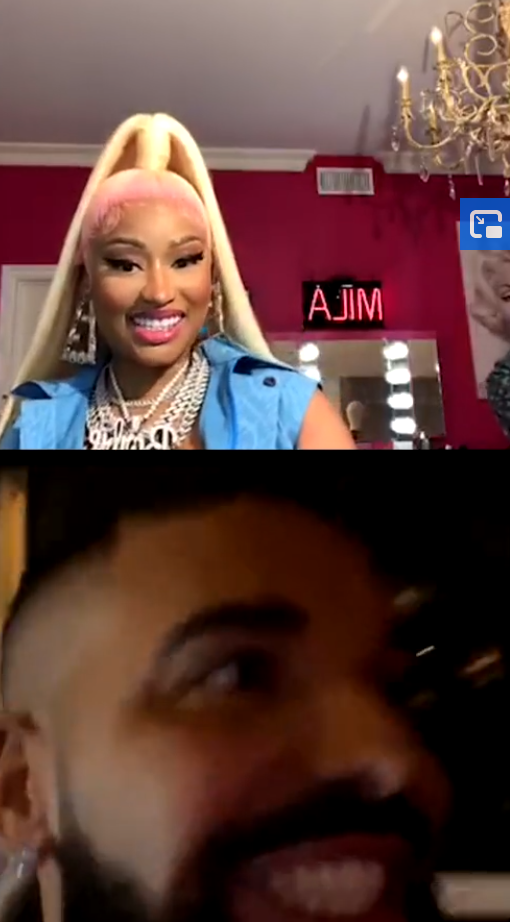 Minaj had been teasing new music, captioning a post, “Btchs act like they want action, heard they want action, btch we aint duckin no action. I’m bout to giv’em dat traction, send a distraction— then ima line’em like FRACTIONS. Friday.”

She also posted risque pics of herself ahead of the music’s release.

The last song Minaj released was in November 2020, “What That Speed Bout!?” with Mike Will Made It and YoungBoy Never Broke Again.

Minaj and husband Kenneth Petty welcomed their son on Sept. 30. The rapper also revealed in her IG Live that just a couple days ago, her baby boy said “mama” for the first time.

For more on Minaj, see below.