Two years ago, Georgia Flipo was thrilled to win guest tickets through a competition on a local radio station to attend the Australian Independent Record Labels Association (AIR) Awards. She went with demo tapes in hand, determined to take advantage of the rare opportunity to be in the same room as the who's who of the music industry. 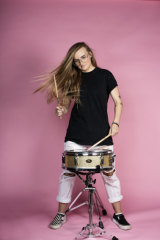 "When I was trying to make it into the music business I really wanted to get myself to the AIR Awards to start conversations with managers and labels, because I knew they were all going to be there," Flipo says.

"I went there on a mission to make it in the music industry and I watched the whole thing thinking 'One day, I am going to make it there. One day I will be nominated.' I manifested this goal in my head and that's why this is extra special."

The 24-year-old's triumphant return to the AIR awards might seem sudden, but her meteoric rise to become one of the most exciting new acts in Australian music has been a long time in the making.

The Melbourne home where Flipo was raised thrummed with the sound of music – it was always playing in the background. The melodies of Pink Floyd, Green Day and the Rolling Stones formed the backdrop to the movements of her everyday life. Her father had once aspired to be a musician, and instruments abounded in their home.

In conversation with Flipo, it is obvious she has always been driven by a fierce determination to succeed. The drive was heightened, as she had no other alternative to achieving success as musician; there was no plan B on the cards.

"I never had a back-up plan. It was always going to be music – 100 per cent. I would be such a miserable person without it," she says.

Given her first drum kit at the age of nine, she idolised her female drum teacher at a time when female drummers were rarely at the forefront. Flipo went on to join a number of bands and toured internationally as a drummer and backup singer with the now-defunct Melbourne indie-rock band EMPRA in 2015. Yet quietly she was harbouring an ambition to give it a shot on her own. She wouldn't be just the drummer – she worked hard had diversifying to boost her skills in audio, producing, singing, keyboards and as a lyricist. Flipo considered it a full-time job, which she supported by teaching the drums to students in her bedroom.

"I remember always singing melodies in my head or singing new melodies over songs I was listening to," Flipo says.

I cried so much that day because I couldn’t believe what was happening.

"So it was always in the back of my mind that I would one day do my own thing."

But even Flipo didn't expect what happened when she uploaded her hit track, About You, to Triple J's Unearthed portal in February. Flipo had written, recorded and produced it in her bedroom, working on the song for more than a year.

"I did that process so that in the end, if I uploaded a song and management, labels or Triple J weren't interested, I would know that I gave it my all and I wouldn't be angry at myself in 20 years when I didn't try my hardest," she says.

Within hours of uploading the song, it was clear she did not have to worry about any regrets her future self might have. It exploded online, catching the attention of the national radio station and its wide listenership. Flipo signalled the arrival of a unique new one-woman talent. As a Pitchfork review put it, "who needs a backup band when you can alchemise a ridiculously catchy synth-pop gem all by yourself?"

Her energetic tunes are packed with electric baselines, catchy synth-pop melodies and of course, vibrant punches from the drum kit. Flipo has mastered the art of pairing vulnerable lyrics about loss and yearning for love with confident (and catchy) multi-layered pop beats.

"I cried so much that day because I couldn't believe what was happening," Flipo says.

"Ever since I was little, my family and I would listen to the hottest 100. We have all the CDs. So getting played on Triple J was huge. It almost makes me cry thinking about it because I wanted to be a musician so bad and at that moment, with Triple J, I knew I finally did it."

More than 15,000 people from 73 countries had visited Flipo's Unearthed profile in less than a week, according to Triple J. The likes on her Facebook page jumped by 300 per cent and more than 120,000 people viewed her homemade video clip.

Her domination of the station's airwaves continued in the following months with the release of Drink Too Much and I Am Not Afraid and she signed a record deal with UK label Polydor.

In July 2018, she performed at Byron Bay's Splendour in the Grass in a lineup that included Kendrick Lamar, PNAU, Hilltop Hoods and MGMT. Before that, Flipo's largest gig had been in front of just 200 people.

"I was expecting like 100 people in the tent," Flipo says.

"I finished the sound check and there were a few people standing there yelling at me with my t-shirts so I went down to give them a hug and then I left to go do some interviews. When I walked back out on the stage there was, like, 7000 people."

It was an obvious milestone, so much so that Flipo commemorated the occasion by getting a tattoo on her forearm. Her friends had often ventured to Splendour, but Flipo had never been able to, instead choosing to spend her money investing in her own music career.

"I went out on stage and I started crying in front of everyone. I cried that whole set," she says.

"Splendour was one of the best days of my life for me. I well up just thinking about it. It was always a dream to go there so when I found out I was on the line up I cried my eyes out. I couldn't believe it was happening.

"I would spend all my money on musical equipment. But I ended up using that equipment to make About You and that ended up getting me to the festival to play.

Flipo barely stops moving when she performs on stage – and it seems that has been the case off the stage as well for the past two years. But success hasn't dampened the fierce determination that saw her attend the AIR awards with her demo tapes in hand.

She's back in the studio working on an album and her calendar is booked for the rest of the year with international gigs at Lollapalooza in Chicago, Reading and Leeds Festivals in the UK and Electric Picnic in Ireland. It's busy, but she wouldn't have it any other way.