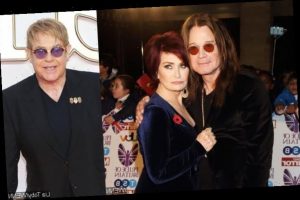 When speaking about her husband’s ‘Ordinary Man’, ‘The Talk’ co-host reveals that the accompanying artwork came from their son Jack Osbourne’s personal photo collection.

“Ordinary Man” is the title track from Ozzy’s first new solo album in a decade, and the heavy rocker uses the lyrics to reflect on his rise to superstardom and his struggles with life in the spotlight as he comes to terms with his inevitable demise.

The tune includes additional vocals from Elton, who also plays the piano, while Slash is featured on guitar, and the finished product is so moving, Sharon has a tough time listening to the whole song.

“I’m just so happy for Ozzy that it’s been well received. I can’t listen to it all the way through because it makes me cry; I just can’t.”

The accompanying artwork for the single, which depicts Ozzy in regular street clothes and boots as he walks in a field, was lifted from son Jack Osbourne‘s personal photo collection from their time filming reality show Ozzy & Jack’s World Detour a couple of years ago.

“Ozzy was wandering off somewhere and Jack took that picture, and we just thought it was such a natural shot of Ozzy, like nobody ever sees him like that, that it was just perfect for this song,” Sharon says.

And she reveals Elton wasn’t expected to sing on “Ordinary Man”, but when he did, they made sure to keep his vocals in the final cut, which dropped last week (January 10).

“(Elton) just loved it…,” she explains. “Ozzy asked if he would play piano because it reminded Ozzy, when he finished it, of an Elton song. And… then he (Elton) went into the studio and then he started to sing, and we just kept it!”.

The “Ordinary Man” album is set for release on February 21.