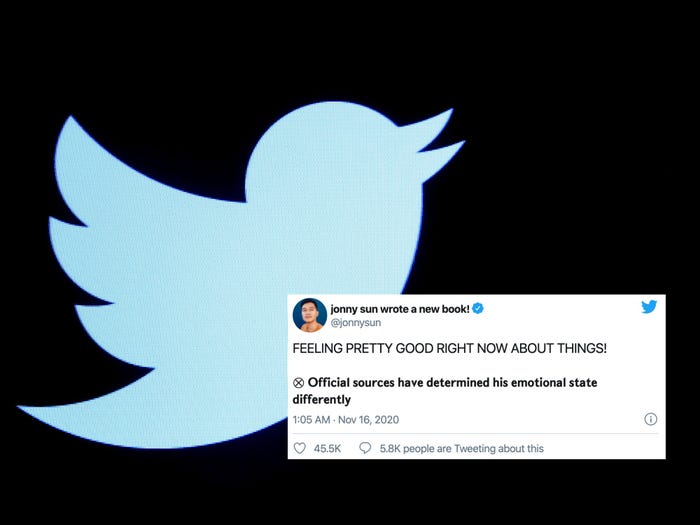 In the days since Insider and Decision Desk HQ, as well as other major news outlets, called the United States presidential election in favor of Democratic President-elect Joe Biden, President Donald Trump has between firing off tweets falsely claiming that he won the election or that it was "stolen" as a result of election fraud.

Twitter has labeled some of the president's tweets — among others containing unsubstantiated election claims — with labels such as "this claim about election fraud is disputed" or "multiple sources called this election differently." It's part of Twitter's effort to curb misleading information on the platform with labels and restrictions on potentially misleading tweets, particularly those from US political figures or US-based accounts with a significant amount of followers or engagement.

The labels, particularly those about disputed claims, have become ubiquitous on Twitter, and are now a meme in their own right. While Twitter's labels lead to a landing page with information from verified news sources, people are attempting to replicate the warnings using symbols and bold fonts that imitate their style.

While many early versions of the meme used generic phrases like "this claim has been disputed" or "this claim is disputed by official sources." Others appeared to parrot the tone of some of Trump's own tweets through the use of capslocked statements.

Soon though, the meme took a spin for both the specific and absurd, with people crafting their own images and tweets that called out who was disputing claims and how they were doing it.

Remember when Dakota Johnson fact-checked Ellen DeGeneres after the talk show host claimed that she hadn't been invited to Johnson's birthday party? We do, as well as the iconic "sugar daddy" moment from "Untucked," the "RuPaul's Drag Race" spinoff. Both earned there own "disputed" tweets.

If you were a fan of the classic 2011 YouTube video "Potion Seller," there's a disputed claim for that as well.

Like all big memes, the "disputed claim" parody tweets are sure to burn out at some point. Now, all there is to do is see how long it lasts.