Home » The Truth About Paris Jackson’s Relationship With Her Mom

The Truth About Paris Jackson’s Relationship With Her Mom

Paris Jackson had an unusual childhood marked by the eternal fame, controversies, and eccentricities of her father, Michael Jackson. Paris opened up about being raised in that environment in a June conversation with Willow Smith on Red Table Talk, admitting she had to seek therapy to treat PTSD developed from being accosted by paparazzi from a very young age. She described flinching and panicking whenever she hears sounds that are similar to camera flashes. “It’s always been pretty gnarly, my social anxiety … I experience audio hallucinations sometimes of camera clicks, and severe paranoia,” Paris told Smith.

After Michael Jackson died on June 25, 2009, Paris — then 11 — went to live with her grandmother, Katherine Jackson, as NPR reported at the time. Her life was turned upside-down then, given her family members are devout Jehovah’s Witnesses, she told Smith. This religious upbringing during her teenage years was an obstacle when Paris began to date both men and women. “My family is very religious and a lot of, like, homosexuality is very taboo so they don’t like to talk about it, it’s not really accepted. But I’ve gotten to a point where I respect them and I have love for them. I respect their beliefs, I respect their religion,” she said

Paris also opened up about her relationship with her mother, Debbie Rowe, who was married to Michael Jackson for three years. Keep scrolling to see how they get along. 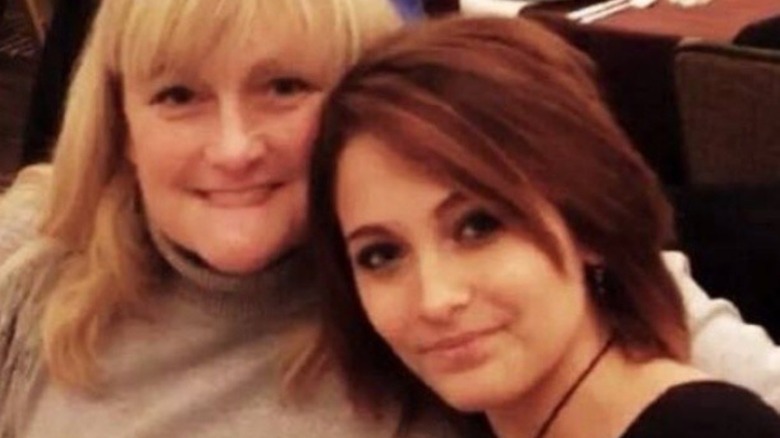 Paris Jackson had minimal contact with her mother, Debbie Rowe, for most of her life. It wasn’t until Paris was 15 that she began to develop a relationship with Rowe, she told Willow Smith on Red Table Talk. Even though she wasn’t raised by Rowe, she is fond of what they now have. “It’s cool, like, getting to know her, seeing how similar we are. Getting into what kind of music she likes, she really likes country and folk. I send her some of the stuff I’m working on … We look a lot alike,” Paris told Smith.

The relationship works for Paris because Rowe has a laid-back attitude, noting that they have something different than a mother-daughter link. “It’s just cool having her as a friend. It’s very chill, which I love, that’s the perfect word to describe it,” Paris told Smith.

Rowe and Michael Jackson married in 1996 and divorced in 1999, and Michael was awarded full custody of Paris and her brother, Prince Michael. According to ABC News, Michael reached a settlement with Rowe following their divorce in which she agreed to let him raise the kids. Following his death, speculation suggested she would fight for their custody, but she and Katharine Jackson reached an agreement that gave her visitation rights, as NPR detailed in August 2009, allowing her to start developing a relationship with her two children.