Over a decade ago, music by the Dixie Chicks was being heard everywhere. Album sales were through the roof, shows were selling out, and stations were playing their music whenever the opportunity arose.

Although they have a somewhat controversial past, the band was a fan favorite, winning the 2006 Grammy Award for Album of the Year and Best Country Album.

This is quite an accomplishment, and there is no doubt that the band members were not only elated but were also extremely proud of themselves for winning. The last album that they recorded, Taking the Long Way, was released over 13 years ago.

That’s a long time for the popular country band to stay under the radar. Recently, the Dixie Chicks announced a new album. So, how are fans reacting?

The band is no stranger to controversy 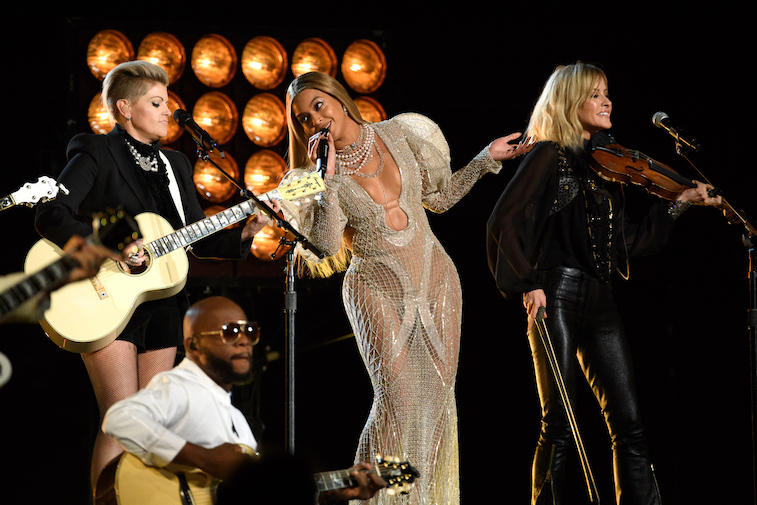 For those who are not familiar with exactly what happened, let’s take a look into the past. According to Taste of Country, band member Natalie Maines was speaking to a large crowd of people at the Shepherd’s Bush Empire theater in London when she made some disrespectful remarks about then-president, George W. Bush.

It was in 2003 that the remark was made, with Natalie going on to say that the band was “ashamed” that Bush was from the state of Texas. After saying this, the band had applause from the crowd, and as a result, didn’t give a second thought as to what was just said.

Little did they know what would happen within a few days.

The Dixie Chicks, in particular, Natalie Maines, may have thought at the time that her comments regarding the President of the United States were not a big deal.

However, the Boot reports that radio stations immediately stopped playing the band’s music, and other country artists jumped to George W. Bush’s defense and turned against the three members of the Dixie Chicks.

It seemed that one single comment was responsible intense scrutiny from fans and media alike, and while the album Taking the Long Way topped the charts at number one, there was one song, “Not Ready to Make Nice,” that was written as a result of the backlash they faced after Natalie Maines’s offensive statement.

The Dixie Chicks have kept busy

People all over the country may have been extremely offended at the remarks made in 2003, however, that hasn’t stopped the members of the band from keeping busy over the years.

According to CNN Entertainment, a solo album was released by Maines, while the other two band members, Emily Robison and Martie Maguire started a band called the Court Yard Hounds. Country Daily reports that the band also invited Beyoncé to perform at the Country Music Awards in 2016.

They may have made headlines for questionable reasons in the past, but that surely hasn’t stopped the Dixie Chicks from keeping themselves in the spotlight.

The band releases a new album

Over a decade ago, the Dixie Chicks were one of the most popular country bands around. They had a huge fan base, and at one time, showed no signs of slowing down.

The band finally announced that after 13 years, they are releasing a new album, and fans are ecstatic. The announcement was made in a video, using a filter and delivering the news in the simplest way possible, saying only that a new album was coming.

Although there is not an official release date, there is no doubt that the new album is causing excitement, and many people just can’t wait. Popculture reports that there is impatience among fans, who have waited over a decade for this wonderful news, and are more than looking forward to hearing the band’s latest music.