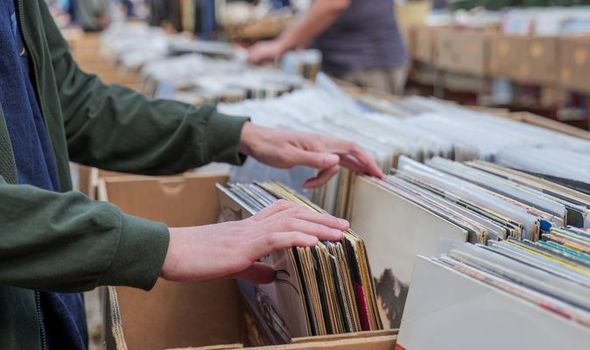 More than five million were bought in 2021 – eight per cent up in a year, said the British Phonographic Industry (BPI). It marks the 14th consecutive year of growth for the format and the highest sales since the early 90s, when Phil Collins’ But Seriously was the top seller. Campaigns such as National Album Day, Record Store Day, The Record Club and Tim’s Listening Parties, run online by The Charlatans’ frontman Tim Burgess, boosted sales at independent record shops and specialist chains.

The BPI figures, using Official Charts Company data, show vinyl accounts for nearly a quarter of all albums purchased (23 percent). The industry body says classic LPs Rumours by Fleetwood Mac and Back To Black by Amy Winehouse – reissued for National Album Day to mark its 15th anniversary – were among 2021’s bestsellers.

Big releases including Abba’s Voyage, Adele’s 30, Sam Fender’s Seventeen Going Under and Ed Sheeran’s = were popular too. Cassette revealed 190,000 cassettes were bought this year. That is a fifth more than 2020 and the most since 2003, when 243,000 tapes were sold and Now 54 led the way.

It would be the ninth consecutive year of growth for tapes, which many major releases now use. Olivia Rodrigo’s album Sour is likely to be the best-selling cassette of 2021, plus Queen’s Greatest Hits.

Geoff Taylor, chief executive of the BPI, Brit Awards & Mercury Prize, said labels’ investment in new talent meant “fans can purchase and collect the music they most love on vinyl, CD and even cassette, whilst also enjoying access to over 70 million songs to stream”.