We Appreciate Wellness: A Breakdown of Grimes’ Bonkers Fitness Routine

Canadian musician/producer Claire Boucher, aka Grimes, is no stranger to physically intensive routines. While making her 2012 album Visions, she infamously barricaded herself inside a room for nine days without food, sleep or visitors. “Once you hit day nine, you start accessing some really crazy shit,” she told The Guardian. “You have no stimulation, so your subconscious starts filling in the blanks. I started to feel like I was channelling spirits. I was convinced my music was a gift from God. It was like I knew exactly what to do next, as if my songs were already written.”

It’s this futurist, crypto-Zen approach to her art that, in hindsight, makes Grimes’ well-documented relationship with Elon Musk feel like a no-brainer. But when Grimes, in partnership with Adidas, posted her entire fitness routine to Instagram on Tuesday, people were no less confused over whether the musician was making a serious endorsement for Peter Thiel-esque anti-aging regimens or pulling off an elaborate troll. Highlights of the routine include “2-4 hours in a deprivation tank,” “1-2 hour afternoon sword practice” and something known as a “neuroplastic goal” that is apparently optimized for Boucher’s blood type. 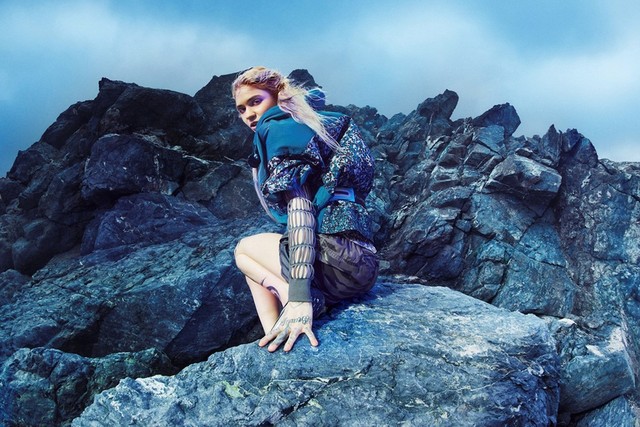 Here’s our breakdown of Grimes’ multi-step routine, and its apparent legitimacy.

I first maintain a healthy cellular routine where I maximize the function of my mitochondria with supplements such as NAD+, Acetyl L-Carnitine, Magnesium, etc. This helps promote ATP and it’s incredibly visceral.

This is a lot of jargon, so let’s do our best to break some of it down. NAD+ is the oxidized form of nicotinamide adenine dinucleotide (NAD), a chemical compound found in all living cells; in recent years, it’s been touted as a therapeutic supplement for anti-aging and as an effective treatment for diseases such as Parkinson’s, though research is still very inconclusive on that front. Acetyl L-carnitine is a naturally-occuring amino acid that helps produce energy, and in pill form has been used to treat a variety of mental disorders including Alzheimer’s disease and depression. Magnesium is integral to the human bone structure, but magnesium deficiency can cause a variety of health problems. (It’s also the mineral ion that ATP — the chemical that provides energy for cell movement — binds to during production.) Naturally, then, it comes with a wide variety of uses as a supplement.

I’m neither a chemist nor a molecular biologist, but it’s true that all three of these treatments are involved in metabolism-building in the mitochondria. And while some of the claims made around NAD+ ‘s effectiveness as an anti-aging treatment appear dubious, none of these substances appear to be total snake oil, either. All three are available as over-the-counter supplements that you can pick up at your nearest Walgreens.

From that point I spend 2-4 hours in my deprivation tank, this allows me to “astro-glide” to other dimensions – past, present, and future.

Deprivation tanks, also known as float tank therapy, are meant to relax both your mind and body. Essentially, you sit in an “isolation tank” that is full of water and Epsom salt that restricts all your senses. People with chronic pain or anxiety benefit the most from these tanks, since it dampens your “fight or flight” instincts, lowers blood pressure and cortisol levels and, according to Dr. Axe, makes you feel like an “astronaut.” Whether it allows Grimes to “astro-glide” into different dimensions is something best left to her own perceptions. Yelp user Andrew K. described his experience at New York’s Lift Next Level Floats as “meditation on steroids.” As for the daily “2-4 hours” spent in the tank, that seems extreme, but not totally implausible for a frequent floater.

In the afternoons I do a 1-2 hour sword fighting session with my trainer, James Lew, we go over the fundamentals that work the obliques, core stabilizes, and triceps as well as a few tricks.

James Lew is a martial arts actor and trainer who performed and choreographed stunts in Rush Hour, Buffy the Vampire Slayer, Luke Cage and more. He even trained Brad Pitt in sword fighting for Troy. While Lew does not seem to make his training services publicly available frequently, he has done martial arts demos and other group courses, according to his Instagram. He has also published two workout videos and a book, all centering on stretching and kicking. Daily sword fighting is Grimes’ most plausible daily routine, given her preference to be holding one in almost all of her videos.

To wind down from this I spend 30-45 minutes on an inclined hike at roughly 4-4.5 miles per hour, arguably the most efficient workout.

“What does ‘most efficient workout’ even mean, anyways???” says I, the fitness expert, eating chips on my couch while over-analyzing a Grimes Instagram post. In all seriousness, claiming that anything is THE best, THE most efficient form of fitness is a fool’s errand — it all depends what you’re trying to get out of your workout. And using an inclined treadmill – I assume that’s what she’s referring to here, given that she can control the exact speed – isn’t even a top contender in the “most effective workout” discourse, at least not on its own. That distinction goes to high-intensity interval training (HIIT), the latest form of fitness regimen that “promises the best workout in the least amount of time,” according to a Vox explainer from this past May. And even then, while HIIT has been shown to be a time-efficient way to burn calories, that doesn’t automatically translate to more efficient weight loss than more prolonged forms of training.

Still, 30-45 minutes on an inclined treadmill isn’t a bad way to get some cardio into one’s routine. Personally, I think it sounds like a nice, if exhausting, “wind down” after two hours of sword-fighting.

I then spend 45 minutes stretching…

If this whole routine is real, I truly hope that she did not cite it in chronological order because her stretching routine is coming much too late in her day. According to my favorite website, WebMD, if you don’t stretch before a workout you can injure yourself. Given her trainer Lew’s prolific writing and training filmography all about stretching, however, I’m hopeful that she at least does some before she wields swords or hops on a treadmill. This prolonged period, if it’s not the only stretching she does during the day, is good because the best time to stretch is “when the muscles are warm and pliable,” as they are post-workout.

… before heading into the studio where my mind and body are functioning at peak level, with a neuroplastic goal between 57.5 and 71.5 AphC’s (which is my preferred range for my blood type).

This technically isn’t a step in Grimes’ fitness/wellness routine, but the claim is so bananas that we had to investigate. Again, a non-molecular biologist here, I googled “AphC” to try and figure out what it stood for. The first result was for the Appaloosa Horse Club. I googled “AphC biology.” First result: the Wikipedia page for Appaloosas. “AphC molecule” yielded a cryptic webpage showing the structure of a molecule called 5-APHC, immediately followed by a page on Appaloosa horse coat genetics.

It’s incredibly difficult to search the abbreviation “AphC” without coming across something to do with Appaloosa horses. Anything that appeared biology-adjacent was mostly indecipherable to my humanities-major brain, but more importantly, none of it put AphC in the context of human health, let alone explained what it could possibly be in layman’s terms. Searching “neuroplastic AphC” immediately brought me to other news posts covering Grimes’ workout. So I think we can safely call bullshit on this one.

I’ve outfitted my studio with the highest grade of red light. It is pretty much 1000 sqf IR Sauna.

An infrared (IR) sauna functions at a much lower temperature (120-140 degrees) than a traditional sauna, which can go as high as 180 degrees. The source of the heat are infrared lamps, which are supposed to give more direct access to the body and help relieve pain and detoxify. The question is how long does Grimes stay in her sauna/studio? Typically IR saunas come with a timer and you shouldn’t be in one longer than 30 minutes. Is the vocal booth a sauna? Is there a separate room? Does the whole thing function as one? Given how dehydrating the process can be, it’s probably not great on the vocal cords, especially as she prepares for the next portion of her regiment.

Though she doesn’t tout it as such, Grimes and her friend Hana Pestle — a musician and gamer  who appeared on Grimes’ single “We Appreciate Power” — might be doing a form of Primal Therapy, which was made famous by the psychotherapist Dr. Arthur Janov and loved by people like John Lennon and Yoko Ono. Janov believed that primal screams could cure everything from alcoholism to asthma. While those assertions are provably false, scream therapy is still popular today as a treatment for anxiety. Screaming is having a very chic moment right now; look at Meryl Streep’s unhinged dinner table scream on Big Little Lies and Florence Pugh in Midsommar.

…while I slow boil the honey tea that maximizes vocal proficiency.

While sword-training is the most Grimes-like part of the regimen steps, to me this one is the most plausible! Tea, especially with lemon and/or honey, has long been touted as a home remedy for a sore throat, and thus a good supplement for strengthening one’s vocal cords. It’s probably splitting hairs to harp over the difference between “maximizing vocal proficiency” and “healing one’s throat after rehearsing the vocal parts to ‘Kill v. Maim,’” so I’ll let this one slide.

I have also eliminated all blue light from my vision through an experimental surgery that removes the top film of my eyeball and replaces it with an orange ultra-flex polymer that my friend and I made in the lab this past winter as a means to cure seasonal depression.

This is the most Elon Musk-y out of all the claims made in the Instagram post, and also the one that’s the easiest to write off as fake – unless you believe that Grimes is conducting unheard-of, Frankensteinian experiments to cure her SAD. (A representative did not respond to a request for comment, but we will update if and when we hear back). If you’re concerned with blue light over-exposure to your eyeballs, blue light filter glasses are very in right now.

I go to bed with a humidifier on.

Since she is a professional singer who apparently does her job from within a sauna, sleeping with a humidifier is one of the more undeniably Good parts of Grimes’ daily routine. Humidifiers provide moisture in the air,  helping keep skin glowing and preventing the feeling of waking up with a dry throat. As Katy Perry says in the comments of Grimes’ fitness post, “Humidifiers YASSS.”

This hashtag is like the moment when you briefly become lucid before waking up from a bad dream.