Merging families can be tough, but for Kourtney Kardashian and Travis Barker, things seem to be going pretty swimmingly. The too hot for Hollywood couple first went public — and we mean very public — with their relationship in February 2021 after a years-long friendship and being neighbors in the hills of Calabasas led the celebs into a budding romance. Despite some harsh words of encouragement from Barker’s ex-wife Shanna Moakler, the reality star and drummer are slowly meshing their families with ease, developing relationships with each other’s kids.

Barker is the father of Landon and Alabama, and even claims Moakler’s eldest daughter Atiana De La Hoya as his own. Meanwhile, Kourtney shares three kids of her own with ex Scott Disick: Mason, Penelope, and Reign. Both celebs took the obvious route in getting each other’s kids to like them… by buying them gifts.

On Penelope Disick’s ninth birthday, Barker reportedly bought Kourtney’s only daughter a pink drum set, according to Cosmopolitan. On the other hand, the “Keeping Up With the Kardashians” star gifted Barker’s daughter Alambama some SKIMS merch, and a crystalized Prada bag. The gifting clearly worked, as a source revealed to InTouch Weekly, “[Barker’s] 15-year-old daughter, Alabama, loves Kourtney,” adding, “[Alabama] follows her on social media and loves her style. His 17-year-old son, Landon, is just happy that his dad is dating.”

Just months into their relationship, the artist’s daughter took to social media, revealing just what she likes to call Kourtney Kardashian.

Kourtney Kardashian and Alabama Barker have a close bond 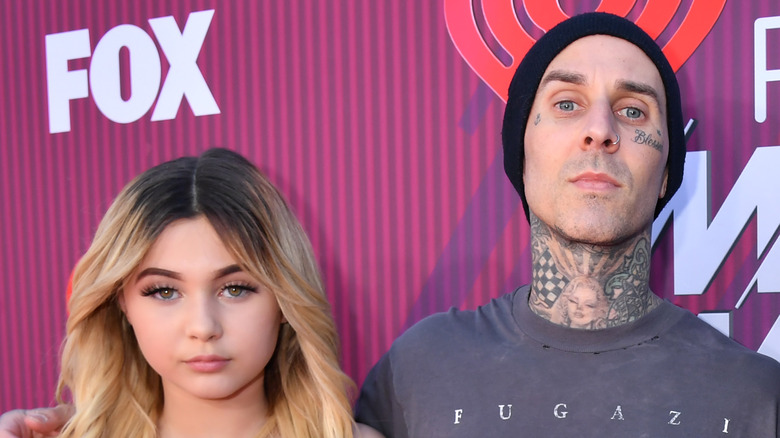 In an Instagram Live video, Travis Barker’s youngest child, 15-year-old Alabama Barker gave insight to her relationship with her famous dad’s girlfriend, Kourtney Kardashian, revealing that she calls her stepmom.

In a game of “Never Have I Ever,” the celebrity kid was asked about her interactions with all of the Kardashians, to which Alabama said about Kourtney, “That’s my stepmom,” according to Us Weekly. The outlet noted how both Alabama and the drummer’s stepdaughter Atiana De La Hoya, whom he claims as his own child, have embraced the Kardashian, with the youngest daughter being “so happy” for her dad in his new relationship. Kourtney’s relationship with Travis’ girls proved to be on good terms when the reality star was seen on a girls’ trip with both Alabama and Atiana back in June.

A source previously told E! News that Alabama and Kourtney have grown especially close: “Alabama knows she can always go to Kourtney for advice or support with anything going on.” The source continued, “Of course, it will never be as if Kourt is her biological mother, but it’s comforting for Alabama to have Kourt around.”