10 Crazy Cat Ladies in Movies and TV, From 'Alien' to 'The Office' (Photos) 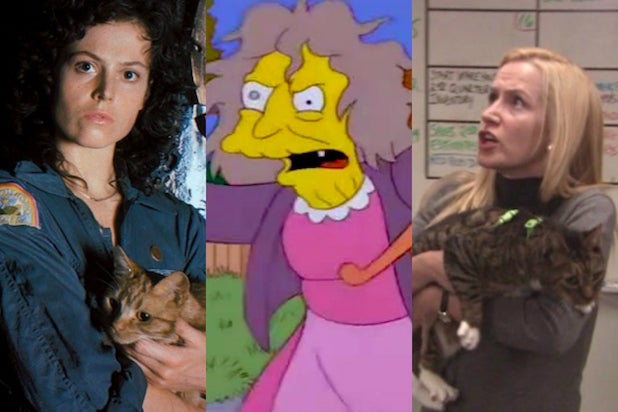 You know the type. Lonely old woman, cluttered household, sheltered from society, and her only friends in the world are her numerous cats roaming around her house. It’s the “crazy cat lady.” Weirdly, it’s not a pop culture trope for men, even though they’re often equally obsessed with cats as women. Just look at the James Bond villain Blofeld, Don Corleone or Robert De Niro in “Meet the Parents.” Still, the crazy cat lady stereotype persists, often with hilarious results. TheWrap decided to look at some of the most famous crazy cat ladies in movies and TV. It’s about to get furry.

“I’ve got my head, I’ve lost my leopard!” That’s Katherine Hepburn in “Bringing Up Baby,” in which Hepburn’s character has a docile leopard as a pet — already a crazy idea — but then mistakes it for a wild one from the circus, fearlessly dragging it around with her even as it’s ready to pounce.

“I’m like Cat here, a no-name slob. We belong to nobody, and nobody belongs to us. We don’t even belong to each other,” Holly Golightly says in “Breakfast at Tiffany’s.” She might be the original movie cat lady, a modern, flighty, cat-obsessed woman taking in a stray without even bothering to give it a name to make it more of a companion and accessory to her lifestyle than a pet.

The Maysles Brothers found the real life crazy cat ladies in the Beales of Grey Gardens. Their documentary was a shocking fly on the wall look at the Beales’s delusions of former grandeur. At one point in the film, Little Edie leave out an entire loaf of white Wonder Bread for not just cats, but even roaming raccoons to pick at.

Ripley is so passionate about her ginger cat Jones in “Alien” that she and the rest of the crew are willing to wander aimlessly around the Nostromo while a Xenomorph is lurking just to save it. Jones isn’t just a plot device either, but an animal that provides some genuine scares and even gives you pause as to whether it might be infected. And Sigourney Weaver certainly seems to love Jones too.

“The Simpsons'” crazy cat lady, a.k.a. Dr. Eleanor Abernathy MD JD, is the perfect embodiment of this character trope, a delusional hermit who’s only real characteristic is that she has dozens of cats she can hurl at onlookers. She first appeared on “The Simpsons” in the 1998 episode “Girly Edition,” where Lisa’s attempt to do a human interest news story to match up with Bart’s ends poorly. “The Simpsons” eventually gave the crazy cat lady a backstory, and fun fact, her real name is Dr. Eleanor Abernathy.

Hermione Grainger – “Harry Potter and the Chamber of Secrets” (2002)

J.K. Rowling said in one of her Pottermore posts that Hermione’s cat Crookshanks is in some ways an early hero of the Harry Potter franchise, having chased after Ron’s pet rat Scabbers well before anyone else knew Scabbers was actually Peter Pettigrew. But Hermione earns the title as crazy cat lady for when she literally transmogrified into one with a potion gone wrong in “The Chamber of Secrets.”

Before Halle Berry takes up the moniker of Catwoman in this campiest of early 2000s superhero movies, she learns of a prophecy from another crazy cat lady, the mysterious Ophelia, who reveals to her an entire library full of cat theory and mythology.

This is Robert De Niro at his silliest, donning full granny gear and a garish, oversized sweater with a cat on it for this goofiest of “SNL” sketches, “Christmas with the Cat Lady.” “Once upon a time there was a woman named Margie. She had dreams. Then she was kicked by a horse. Now she has cats!”

Angela Martin only loves a few things in her life: God and her cats. She has a nanny cam so that she can watch Mr. Ash hump Princess Lady while she’s away at work, and she has a very particular medicine regimen for Sprinkles, who famously, Dwight promptly kills and sticks in the freezer. Perhaps no moment is better than when the office goes into a panic over a fire and she throws her cat Bandit into the ceiling in an effort to rescue him.