Get back into the school spirit with films like ”Friday Night Lights,“ ”Fast Times at Ridgemont High“ and ”Legally Blonde“ 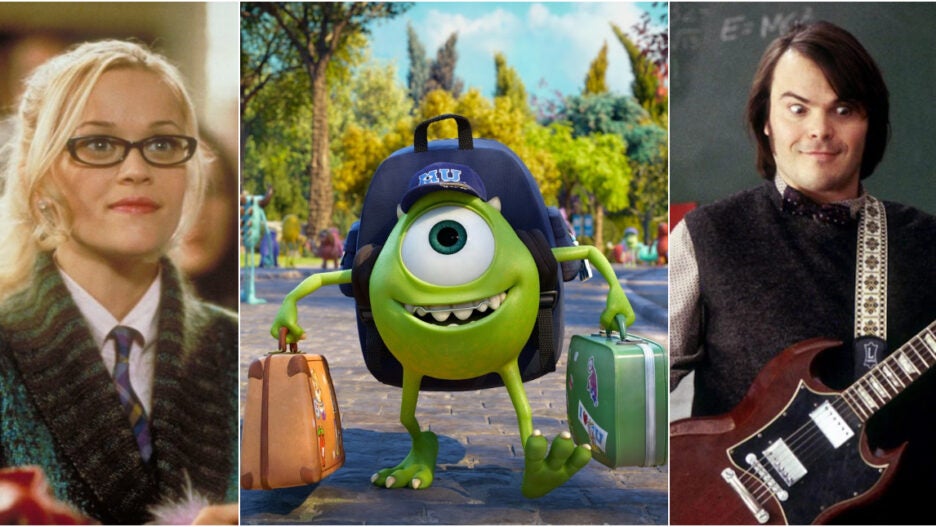 There are hundreds of movies about going to school and growing up, but only a handful specifically capture the feeling of summer ending, entering into a new grade, meeting new people and starting fresh. Movies like “Ferris Bueller’s Day Off,” “The Breakfast Club” or “Dazed and Confused” — otherwise bona fide classics — are about leaving school behind. This list though celebrates the back-to-school spirit, whether it’s the parties, the awkward dances or yes, even the teachers.

Look, a film with a toga party, countless pranks and an entire frat house on Double Secret Probation does not sound like the best influence for anyone hoping to head off to college and succeed, but “Animal House” actually has a lot of wisdom to impart. The ultimate snobs vs. slobs comedy teaches you to find where you belong. In those opening scenes where Flounder and Pinto first step into the Delta house, they get drinks spilled on them, the house is a mess and I think someone just barged in on a motorcycle, but you know instantly, this is the place to be.

One of the most quintessential teen movies, Amy Heckerling’s “Fast Times at Ridgemont High” set the bar for raunchy teen comedies with heart and depth, as well as many of the high school character tropes we’ve come to know.

Hey, look who’s getting some class … in class! You’re alright. “Back to School” is no “Caddyshack,” but it’s Rodney Dangerfield doing what he does best, throwing zingers, double entendres and wads of cash at you a mile a minute.

Edward James Olmos’ Oscar-nominated role as math teacher Jaime Escalante still manages to inspire young people who feel they’re too tough, too cool for math or feel like their surroundings have given up on them. The film is based on a true story and is an underappreciated back-to-school essential.

“Kindergarten Cop” is by no means a masterpiece (though the Criterion Collection pulled a fast one a few years back), but this definitely stands apart among Arnold Schwarzenegger’s comedic roles as a movie about children, discipline and the fundamentals in life, like as one wise kid imparts, “boys have a penis and girls have a vagina.”

Based on Roald Dahl’s novel, the charming “Matilda” as directed by Danny DeVito still has a winning attitude about going to school and shining despite monstrous parents and principals who would rather see you fail. This children’s classic has whimsy and wisdom for days.

I’m guessing your school doesn’t have a sorting hat, quidditch or transfiguration classes, but the first Harry Potter highlights Hogwarts at its best. It teaches kids about the jitters of discovering not just a new place or strange new people but tapping into what makes you special.

“What, like it’s hard?” The charm of “Legally Blonde” lies in Reese Witherspoon’s spirited confidence, goodness and optimism all channeled into the idea that being confident and professional shouldn’t come at the expense of being yourself.

Who wouldn’t love to be in Jack Black’s classroom learning about Motorhead and practicing all those catchy fake songs I already know every single word to?

“Mean Girls” opens with Lindsay Lohan’s Cady looking up at her nurturing parents. They ask if she has money for her lunch and if she remembers her phone number. The joke is, she’s a teenager only going to public school for the first time. It’s funny because going back to school is a hard experience no matter your age.

While people adore the TV show, Peter Berg’s film “Friday Night Lights” milks the high intensity and drama from starting a new football season and being the new coach in town. From the beginning of the school year, you feel the pressure on each of these kids to succeed on the gridiron and claim their future, which is exactly what going back to school is all about.

Stephen Chbosky’s filmed adaptation of his own novel is one of those sweet, underrated gems with a great sense of nostalgia and a modern sensibility. Some of the film’s best moments feature Charlie (Logan Lerman) in his first few days of school, such as realizing your old friend from junior high has now grown distant, or in looking for the courage to find his feet on the dance floor at Homecoming.

No one would’ve guessed that a comedy remake of a campy ’80s show about cops going undercover in a high school could work. But the zany, screwball chemistry of Jonah Hill and Channing Tatum going back to school and trying to fit into cliques taught us all a lesson.

Pixar does “Animal House” with their take on the war between rival frat houses and the story of how Mike and Sully learned to become best buds, realizing along the way that raw talent and burying your nose in books can each only go so far in life.

While Richard Linklater’s “Dazed and Confused” is set on the last day of school, his spiritual sequel “Everybody Wants Some!!” is set in the few days before classes begin. In 1980, a Texas college baseball team lives together in a house ahead of the start of the fall season. It’s a film about masculinity, fading glory days and discovering a new identity at a new chapter in your life.