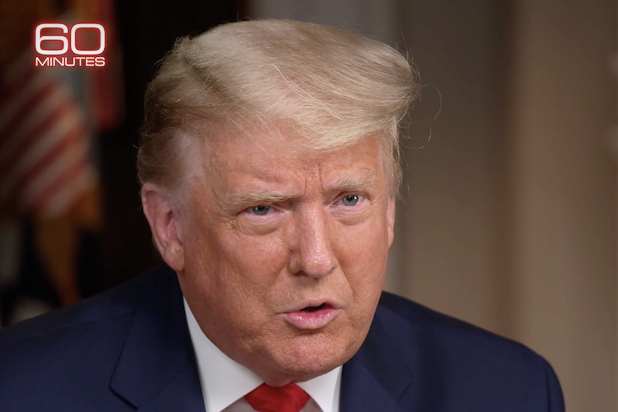 That’s the largest audience for a “60 Minutes” hour since the program interviewed Stormy Daniels on the March 25, 2018 episode.

The viewer tally also might still go up — possibly as high as 1 million more audience members — when Nielsen’s out-of-home viewing is added in tomorrow. And then a few days down the road there will be DVR-catchup in delayed-viewing numbers.

It certainly didn’t hurt that “60 Minutes” followed an afternoon NFL game — but that lead-in applies to a number of the CBS newsmagazine program’s episodes during football season. Sunday’s “60 Minutes,” which began at 7:30 p.m. ET, went up against Fox’s Game 5 of the World Series (and partially, its pregame show).

The “60 Minutes” tally is more than Trump’s last town hall, which drew 13.5 million viewers across several NBCUniversal channels. It is also more than Biden’s 14.1 million, which aired at the same time on Thursday, Oct. 15. Biden’s town hall only aired on ABC.

Readers can find the earlier-available Nielsen numbers for last night here, where one can also get a snapshot of World Series Game 5 and “Sunday Night Football” ratings.

The tense “60 Minutes” interview really went sour when Stahl asked Trump a hypothetical question about what would happen if he doesn’t win the election.

“You’ve said that Attorney General Barr should go after President Obama,” Stahl said. “How would you feel if Joe Biden went after you?”

At that point, which was around the 37:30 mark of what was supposed to be a 45-minute interview, Trump walked out.

“I think we have enough of an interview here,” Trump said, “OK, that’s enough. Let’s go.”

He thanked Stahl and said, “I’ll see you later.”

Trump then stood up and left.