A Million Little Things Season 2 Finale: Rome and Gina Lose Their Baby, Eddie Gets Hit by a Car 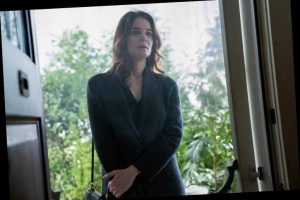 One wedding — well, vow renewal — and a baby. That’s what viewers thought was in store heading into Thursday night’s season 2 finale of A Million Little Things.

Gary (James Roday) and his new flame, Kat’s friend Darcy (Floriana Lima), head to Katherine (Grace Park) and Eddie’s (David Giuntoli) vow rehearsal renewal. Before they can practice saying “I do,” Rome (Romany Malco) gets a call and announces that his and Gina’s (Christina Moses) surrogate Eve (Ebboney Wilson) went into labor.

After accepting Eddie cheating on her and having a baby with their friend Delilah (Stephanie Szostak), Kat continues to roll with the punches, telling her husband, “Why don’t we do the ceremony at the hospital? All I want is to renew our vows surrounded by the people who helped us get here.” So the Boston buds relocate to the hospital and scope out the chapel. Eddie hangs back to gather some supplies for the big day when an unexpected visitor shows up at his door. Colleen (Betsy Brandt), the sister of the girl who drowned after a night of partying with Eddie at their lake house as teens, urges Eddie to stop poking around the accident and “let it go.”

He can’t, of course, and calls his sister Lindsay (Sprague Grayden) for more clues about what actually happened that night. Lindsay tells Eddie she shoved the wet clothes she found him in that evening in the crawl space where they used to hide beer growing up. Instead of heading to the hospital to meet Katherine and the gang, he drives back to the lake house.

Meanwhile, as Rome and Gina anxiously await the arrival of their child, Eve and the unborn baby’s heart rates start to spike. Hospital staff starts pulling Eve into emergency surgery, announcing she’ll need to have an unplanned C-section, while also revealing that the baby is a boy. Delilah’s new beau Miles (Parker Young) brings sandwiches for everyone as they wait at the hospital for the baby to be born. Eating an egg salad sandwich causes Maggie (Allison Miller) to recall happy times with ex-boyfriend Eddie when they ordered lunch from the deli.

Even though she’s about to move to England to begin a fellowship at Oxford and Gary started seeing someone new, Maggie decides to tell Gary she still has feelings for him. “She seems great,” Maggie says of Darcy, “but we’re us.” Gary admits, “Do you have any idea how many times I’ve wanted to hear you say that to me?” Still, he tells her, “I’m sorry, Maggie, you’re too late.”

Back in the waiting room, there’s some good news: Rome and Gina can go meet their baby boy. The new parents get Delilah’s permission to name their newborn after her late husband and their friend John (Ron Livingston). Unfortunately, the baby bliss doesn’t last long. After conferring with Delilah, Gina returns to find Rome getting angry with a nurse. “Eve wants to talk to us, babe,” he tells Gina. “She changed her mind.”

Gina and Rome go speak with Eve, who is cradling the boy she just gave delivered. “You two have been nothing but kind,” Eve begins. “But that’s just it, everything you’ve done and all the support I’ve gotten from the shelter, I realized for the first time I could do this, I could raise this baby on my own.”

And with that, Rome and Gina go home empty-handed. “You made me want this,” a teary-eyed Gina tells Rome.

Maggie also leaves with one less person than expected. She asks Gary to come with her to the U.K. and although he declines at the hospital, he shows up at the airport. But only to offer an apology. “I can’t lose another friend, and I couldn’t let you fly to Oxford without telling you how sorry I was,” he tells Maggie, adding, “Once again our timing is the worst. I just started seeing someone and I want to see how it plays out.” So he heads back to Darcy’s house.

Eddie, unaware of any of his friends’ drama, found his clothes from the night of the accident and discovers the bracelet he gave Alex in his pocket. This leads him to assume he had been with Alex right before she drowned. “I remember now, it slipped off her hand when I tried to grab her,” Eddie says on the phone to his sister. “I took Alex on the boat that night. I was with her when she drowned. That’s why my clothes were wet. If it weren’t for me, she’d be alive right now.”

The recovering alcoholic then heads into a bar and orders a scotch. Katherine gets home and realizes Eddie left her dress and cake behind — he never planned to come to the vow renewal ceremony. Just as Eddie picks up his glass, he notices a belligerent sports fan shouting at the TV. The intoxicated patron gets up and stumbles into Eddie’s barstool. Eddie puts down the drink and declares that somehow, “That guy just saved my life.”

Eddie leaves the bar and tells Katherine he wants to come home, tell her everything and do the vow ceremony tonight at their house, even if it’s just the two of them. Mid-call, though, Eddie gets hit by a car. It’s unclear whether he’s still alive, but we’ll have to wait until season 3 to find out.