James Herriot (played by Nicholas Ralph) was made a partner at Skeldale House in the new season of the Channel 5 hit All Creatures Great and Small. He has been using his new title to lead a new and controversial TB testing project, involving cows. The star spoke to Express.co.uk and other press about how one cow tried to “run away” from the set.

James has been through a lot in the new season of the uplifting family drama as he has been juggling married life with his new work responsibilities.

Not everyone in Darrowby is pleased with his idea of TB testing, but he is adamant it will save lives.

As a result, cows have featured heavily in the new series and on the whole, they have been well-behaved co-stars.

However, Nicholas recalled the moment one particular cow started to play up.

He said: “Instead of a runaway bull (from a previous season) we had a runaway cow. 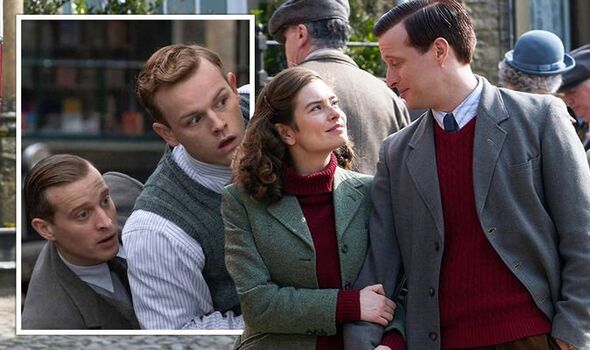 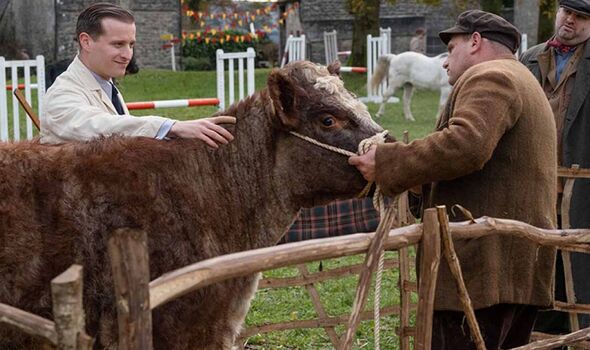 “You had these animal wranglers who are, you know, built like barn doors and they are struggling with this cow.

“They were just transferring [it] from one field to another, we weren’t filming at that time or anything.

“The cow just decided to kick off a little bit,” he recalled. However, he did praise the animals for being “so good”.

He continued: “They train them up so well. It was like, just say the word and if you’re not comfortable you don’t even have to say, you just walk away, just get out of the situation.

“We all do feel really comfortable but then again it just proves that animals are, you know, temperamental if it’s annoyed or bored or whatever. 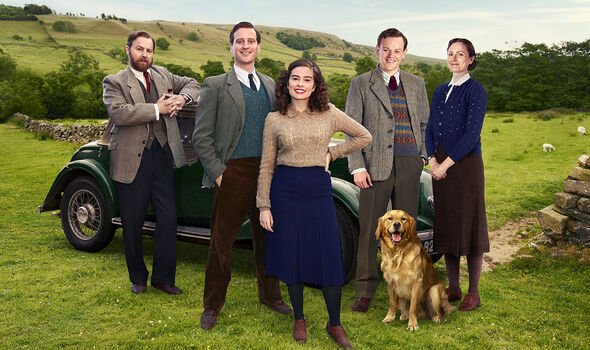 “So yeah, it just started bucking and rearing and things like that and it took two guys to calm her down.”

This is not the first time the cast have witnessed a runaway animal on set, as they have previously spoken out about a difficult bull.

Clive the bull proved to be a challenge for the stars, including Helen Alderson actress, Rachel Shenton.

Speaking at the BFI and Radio Times Television and Film Festival, Nicholas explained how Rachel had to try and tie the bull up.

However, the animal kept walking away from her which meant they had to keep filming the scene again and again. 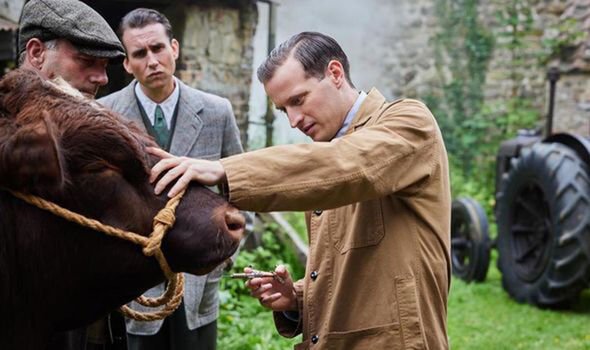 Rachel explained: “Every time I would come out, deliver the line and he would start to move.

“It is just such a big operation because he is massive, so you would have to walk him all the way around the yard to get him back in position and reset.”

Nicholas opened up ahead of the season three premiere about some of his most memorable moments working with animals.

He mentioned a particular dog who left him covered in hair after they shared a scene together.

“It was almost like, you know in Scooby Doo when somebody runs away and a puff of smoke in the shape of their body is left,” he said.

“So that was what working with this dog was like but instead of a puff of smoke, it was a puff of hair.

“I just ended up with the dog’s hair on my body, I don’t know what was going on with it, it was just shedding everywhere.”

The star said he had grown more comfortable working with animals since the series started.

He said: “Like anything, it comes with experience. We were filming TB testing and the director wants to make sure everything is right and I am now like, ‘Yep, I know my way around this’.

“‘I’ve done TB tests loads this year’. You just get more confident and comfortable and are around animals all the time really.

“Horses, I’m still very wary of horses and a little bit intimidated by them.”

All Creatures Great and Small airs on Thursdays on Channel 5 at 9pm.