If you thought thirsting over Andrew Scott, a.k.a. Thee Hot Priest from Fleabag, was so 2019, think again. Sure, we did all get used to him in his little priest costume, quoting the Bible in an extremely hot way, but things are different in 2020. He’s back and, I hate to be the one to break it to you, he’s boho now. Like, so boho that he has a top knot in his current role on His Dark Materials. We need to talk about this ASAP, because I have some questions. First and most importantly, why is this look doing it for me as much as it is?

I don’t know if you’ve been watching His Dark Materials on HBO, and I won’t spoil anything if you haven’t, but you should be. It’s a great adaptation of a beloved fantasy series and it won’t stress you out like Game of Thrones because the ending has already been written. There is also the reason for the season: Le Top Knot on John Parry (also known as Jopari), played by one Andew Scott.

You know how Mr. Hot Priest said “it will pass” about Fleabag’s feelings, and you cried and cried because it felt like he was talking to you, too? This top knot is making it very hard to let my obsession with him pass. He really rolled up mid-way through His Dark Materials season 2 with his hair pulled back into a bun, finger tattoos, a multitude of rings, and an embroidered jean jacket and said, “Yes, this is good.” The nerve of that man! For comparison’s sake: 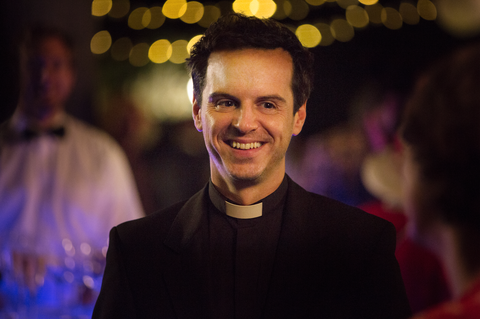 Yes it is kinda hard to see the top knot in that photo but just trust me, it’s there. 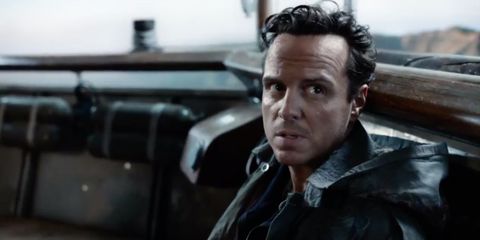 The reason why this one hairstyle has sent me into such a tizzy is that he looks like he just got back from throwing frisbees on the quad—or doing that thing where you stretch a tight rope between two trees. (Slacklining? I think that’s called slacklining.) He looks like what walking into Lush smells like. He looks like a soccer player. He looks like he’d rope me into listening to a drum circle. He looks like an Arizona Iced Tea personified. He looks like he’s going to commit borderline cultural appropriation by trying to sell me a dreamcatcher and some crystals from a tent at a Renaissance Fair. And yet here I am, weirdly turned on by all of it. It’s like I don’t want to find this attractive but somehow… I really, truly do.

I hope these aren’t hair extensions and that Scott grew his hair out for the role. A clip-on top knot is decidedly less sexy. To all the boys, men, and short-haired folks whose manes got a little long and mangy in quarantine and are forced to change up their look until barbershops and hair salons become more safe, take note from this subtle bun. Maybe you don’t need to look shaggy like Harry and Ron in Goblet of Fire. There are other ways to wear your hair long. Please, consider the top knot.