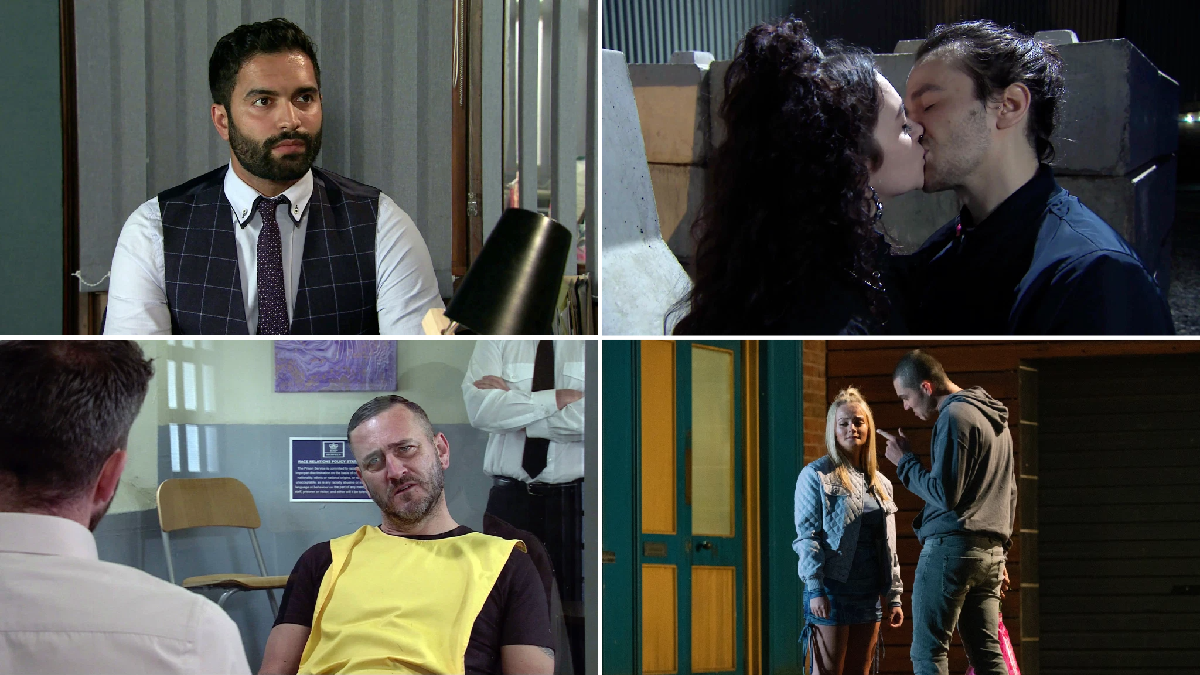 It’s that time again! We’re sitting down to write another seasonal soap guide and as autumn slowly starts to creep into action, the days will get colder, the leaves on the trees will turn all manner of orange, red and yellow colours and huge storylines will kick off in Coronation Street.

As the pressure gets to Imran (Charlie De Melo), the first few week’s of autumn in Weatherfield will focus on that all important trial following Seb Franklin’s (Harry Visinoni) death.

Elsewhere, characters are returning that are both dead and alive, secrets are being kept (obviously) and you think one Weatherfield resident’s life is complicated now? It’s about to get a whole lot worse over the coming weeks.

So grab a cuppa and a couple of biscuits, we’re here with your ultimate spoiler guide as autumn in Coronation Street begins…

The pressure is on for Imran

Viewers have seen how determined Imran is to win the trial for Kelly’s (Millie Gibson) sake.

The lawyer has become somewhat obsessed with this latest case, it was only in a recent episode he admitted even when he sleeps, he’s dreaming about anything court related.

Past trials have taught us Imran is a man ready and prepared to do anything he can for his client, but if the trial doesn’t go his way, what impact will that have on him?

Sabeen is back for the trial…and Imran?

Imran’s ex wife Sabeen (Zora Bishop) is back in Weatherfield and representing Corey, meaning these two characters will go head to head.

We’re expecting some intense scenes as confident Imran and Sabeen both fight to win.

Away from the trial though, will Sabeen stick around?

Toyah (Georgia Taylor) and Imran’s relationship is being tested throughout this court case, will Sabeen get her claws in?

Will she try and win Imran back?

Nina (Mollie Gallagher) will be forced to relive the night of the attack soon as a piece of music transports her back to the last day of Seb’s life.

Heading back to the wasteland where Corey (Maximus Evans) and his gang hung out, Nina will recall the events that occurred during the horrific evening.

In special scenes, Seb will return from the dead as flashback scenes finally reveal just who killed the young man.

Nina is questioned as the trial begins

After signing her new statement, Nina takes the stand and prepares to be questioned as the trial begins.

Tense scenes ahead, but can Nina hold her nerve to help bring justice for Seb?

Asha (Tanisha Gorey) will be put on the spot soon when she enters the witness box and is questioned about her feelings for Nina.

Despite telling the court that Corey bullied her into lying to the police, Imran will cross a line and will suggest that Corey was targeting Nina out of jealousy as Asha was in love with her, and not him.

Horrified at the implication it was her fault, Asha will burst into tears.

Elsewhere, gang member Eli will be questioned by Imran, who suggests he’s lying about the events to get a reduced sentence himself.

Corey is questioned – and lies through his teeth

Smug Corey takes the stand at the trial and completely lies through his teeth, painting himself as the victim and telling the court that Kelly attacked Seb.

Corey has successfully framed Kelly prior to the trial, but how far will he push things to ensure he doesn’t go down for murder?

Emotions getting to her, Abi will unleash her anger at Corey’s dad Stefan (Paul Opacic).

A rattled Stefan will try his best to deny it as Abi searches through his social media accounts, but will she find any proof?

Will the discovery of bribes be enough to ensure Corey gets sent down?

Fiz and Tyrone continue to spend time together

Back in Weatherfield, trouble is continuing for Fiz (Jennie McAlpine) and Tyrone (Alan Halsall).

They’ve shared a kissed and are spending more time together because of Hope and soon, they’ll be forced to take their daughter to her first therapy session.

As Hope explains to a psychologist why she started the fire, Tyrone and Fiz are heartbroken as they realise how emotionally damaged their child is.

Poor Alina (Ruxandra Porojnicu) hasn’t had it easy since starting a relationship with Ty.

She’s failing to see that Tyrone clearly still has feelings for Fiz and, unaware of her fiancé’s recent kiss with his ex, decides autumn would be the perfect time to fly to Romania so Tyrone can meet Alina’s family.

But with Tyrone desperately wanting to support Hope, he’s torn.

Will he leave with Alina and continue to lie to himself about how he really feels?

Or prioritise his daughter?

Ruxandra has been sharing images and social media posts of her spending time with fellow Corrie cast members, alluding that it has been great working with them all in the past tense, leaving many fans to wonder whether she has perhaps left the show.

Of course, there is every chance she was just spending time with her friends, but given how messy Alina’s relationship is with Tyrone at the moment, will she be left heartbroken if Ty admits he still loves Fiz?

They’re engaged, will they get married before Alina discovers Tyrone kissed his ex?

Phelan makes his return…sort of

Yes, shock horror everyone! Pat Phelan is back!

Discovering Phelan’s ashes has come as quite the shock for Todd (Gareth Pierce).

Soon, wanting to dispose of the ashes each in their own ways, George (Tony Maudsley) and Todd will fight over just who will get rid of the serial killer.

As Todd races through the street holding the ashes, disaster will strike when he trips and sends them flying!

Unimpressed Eileen (Sue Cleaver) arrives and is led down a merry road by Todd, who tells her the ashes are that of a little old lonely lady.

Eileen grows sad and wants to give the lady a send off, but will anyone tell her they’re actually Pat Phelan’s ashes?

Our spring spoiler guide introduced Will Mellor’s evil character Harvey Gaskell and throughout the start of the year, he was part of the huge storyline involving Leanne (Jane Danson), Simon (Alex Bain) and Sharon (Tracie Bennett).

With Sharon gone and Harvey currently behind bars, you’ll be shocked to read there is speculation the drug lord could return in autumn!

According to The Sun, a few weeks ago, the cast were in the middle of filming its Super Soap Week, and therefore it is thought that Harvey will be making a comeback for the explosive events that transpire during the week in question.

New pictures have also been released that show Harvey in handcuffs, so this villain is certainly on his way back to Weatherfield to cause trouble once more.

Back to get revenge after Leanne sent him down? Perhaps.

If so, will he plan a daring prison escape?