“It’s been exceptionally rewarding to hear from so many individuals, both in Maryland and from across the country, who appreciated the editorial,” Peter Jensen says 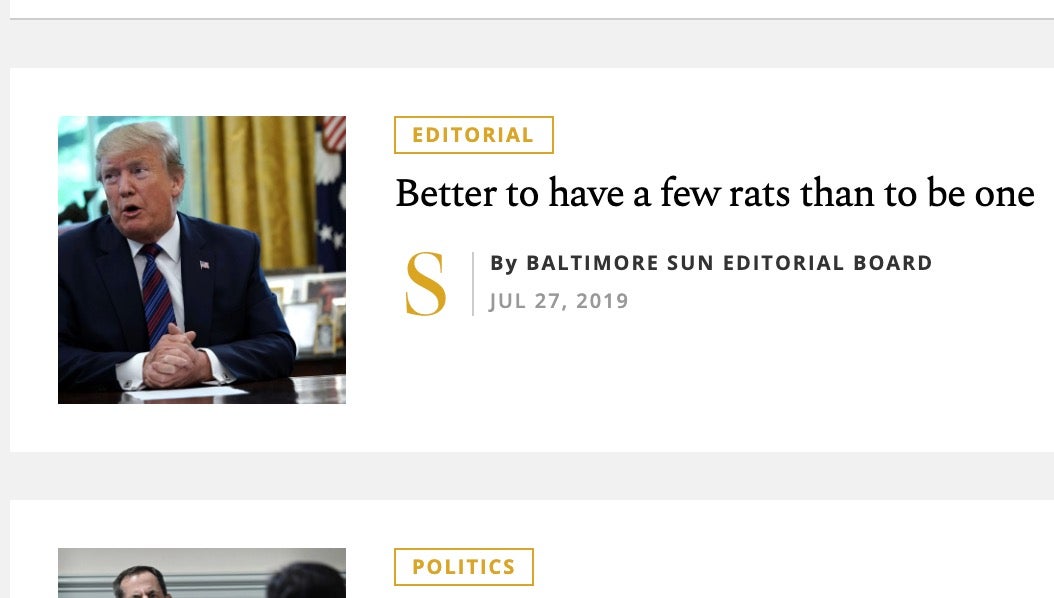 The Baltimore Sun hit back hard at President Trump on Saturday after he insulted the city and its congressman, Democratic Rep. Elijah Cummings, prompting a strong response that the writer says has “perplexed” him.

“I’m a little perplexed by the amount of attention it has received,” Peter Jensen told TheWrap of reactions to his piece titled “Better to have a few rats than to be one,” which criticized Trump for referring to Baltimore as a “disgusting, rat and rodent infested mess” and “this very dangerous & filthy place.”

“I think frustration with President Trump has been expressed in many different quarters and in many different ways,” Jensen told TheWrap. “My hope was that the editorial could speak to the frustration of having Maryland’s 7th congressional district, an area that extends far beyond Baltimore incidentally, described in such dehumanizing terms merely to embarrass the local congressman. It’s like tossing a bomb into a crowded auditorium to take out the orchestra conductor. The rest of the destruction is just collateral damage.”

“It’s not hard to see what’s going on here,” Jensen wrote in the original piece. “The congressman has been a thorn in this president’s side, and Mr. Trump sees attacking African American members of Congress as good politics, as it both warms the cockles of the white supremacists who love him and causes so many of the thoughtful people who don’t to scream.”

Jensen also wrote, “[W]e would tell the most dishonest man to ever occupy the Oval Office, the mocker of war heroes, the gleeful grabber of women’s private parts, the serial bankrupter of businesses, the useful idiot of Vladimir Putin and the guy who insisted there are ‘good people’ among murderous neo-Nazis that he’s still not fooling most Americans into believing he’s even slightly competent in his current post. Or that he possesses a scintilla of integrity. Better to have some vermin living in your neighborhood than to be one.”

“The casual racism of the moment was pretty obvious. I suppose I was angry when I wrote it,” he later explained to TheWrap. “But imagine you live in Baltimore or elsewhere in the 7th and you are doing your best to make it better and along comes this bomb thrower. It’s not just some guy, it’s the president of the United States seeking to harm a community in his own country. Isn’t he responsible for its welfare, too? Where was he before this moment? Certainly, not investing in the city’s welfare. Not putting more cops on the streets. No knocking down vacant homes. Not funding drug treatment centers. Or jobs programs.”

He said he “sensed that this was the moment to respond … I wanted to remind our readers of who this guy is and what he’s done.”

Many politicians, authors and consumers have tweeted about the piece, calling it “amazing” or using clapping emojis, while the New York Times described it as “blistering.”

“As for reaction, I can report that it’s been overwhelmingly positive, particularly from people who live in this area. I’ve seen some criticism, too. Twitter exists for that purpose. But it’s been exceptionally rewarding to hear from so many individuals, both in Maryland and from across the country, who appreciated the editorial,” he said.