“They’re not allowing these kids to set foot on campus right now, but they are allowing child actors,” one parent tells TheWrap

Parents are up in arms about Los Angeles area schools being used as locations for film, TV and commercial production while real kids, especially those with special needs, are not yet allowed on campus due to COVID-19 concerns.

Jenny Hontz, communications director for the 4,000-member grassroots organization Speak UP that represents parents with students in Los Angeles Unified School District schools, shined light on the issue last week when she tweeted a photo of child actors on the campus of Kester Elementary/Kester Magnet School in Sherman Oaks for a recent Apple TV production.

Although Hontz does not have children who attend Kester, she told TheWrap the photo had been sent to her by an irate Kester parent who happened to see the filming in action.

Kester Elementary officials did not immediately respond to a request for comment.

A Los Angeles Unified spokesperson said in a statement to TheWrap that the practice of filming on school property has been common for years, pre-COVID.

Using schools as filming locations is, in fact, common throughout Southern California. South Pasadena High School, overseen by the South Pasadena School District, is currently being used as a location for the upcoming HBO Max series “Generation.” The high school did not immediately respond to a request for information as to whether or not they had received complaints.

An LAUSD spokesperson defended Hollywood’s use of schools  during the pandemic Filming “on school district property, including schools, is subject to state and county health standards, which are different than those which allow students to provide in-person instruction,” the spokesperson said. “State rules currently allow filming at schools even though those same schools do not meet the state rules to reopen.”

LAUSD said the number of people allowed on a set is significantly lower than would occupy a school during a normal school day, and those on the set must adhere to health and safety guidelines that include COVID testing, use of PPE, social distancing and regular sanitation. 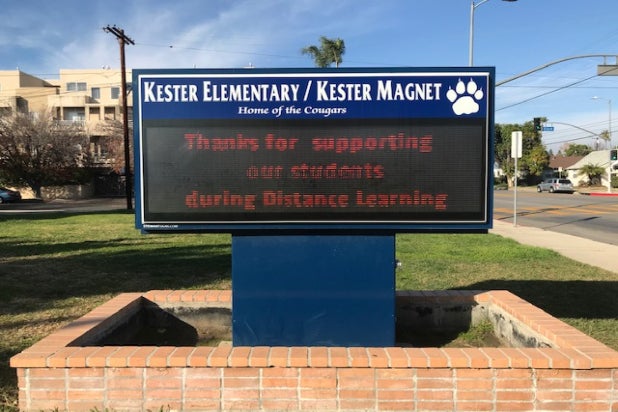 Hontz is not buying it, however. She argues that special needs students should be able to return to campus because they represent a comparatively small number for whom equivalent safety protocols could be observed.

“They are not allowing these kids to even set foot on campus right now, but they are allowing child actors to come on campus and provide revenue for the district,” Hontz said. “So we see inconsistent state guidelines that put the education of kids last.”

In October 2020, Los Angeles County said “high needs” students could return to campus provided their numbers did not exceed 25% of the total student body. However, LAUSD put a halt to those plans during the winter COVID surge.

A spokesperson for FilmLA, the official film office of the City and County of Los Angeles, which oversees location filming permits, told TheWrap that tallying how many area colleges and universities are used as shooting locations can be difficult since they do not require a city or county permit. However, FilmLA said that when filming occurs on any property owned by one of the six school districts partnered with FilmLA, license agreements — in addition to film permits — are generated.

Between June and December 2020, there were 275 approved contracts for the use of school facilities at those partner districts — 70% were to park vehicles on the property and 30% were contracts to film.

“As we do not have partnerships with every area school district, those counts may not be representative,” the spokesman said. “Filming could be happening there, and we would have no way of knowing.”