You are cordially invited to celebrate the official first look of Netflix’s next big show. Bridgerton — which drops Christmas Day — is from executive producer extraordinaire Shonda Rhimes, and the first full-length trailer is a tantalizing treat for future fans!

The highly anticipated drama is giving us a glorious mixture of Downton Abbey meets Gossip Girl vibes and we are currently giving curtsies of gratitude to the TV gods. We’re particularly dazzled by the voice of the one-and-only Julie Andrews who plays Lady Whistledown, the mysterious author of a 19th-century tabloid.

“All is fair in love and war,” Andrews ominously purrs as the trailer cuts to Daphne Bridgerton (Phoebe Dynevor) as she prepares to enter society for the first time.

Adapted from Julia Quinn’s best-selling novels by showrunner Chris Van Dusen (Scandal, Grey’s Anatomy), Bridgerton follows the eldest daughter of the powerful Bridgerton family as she makes her debut onto Regency London’s competitive marriage market. Hoping to follow in her parents’ footsteps and find a match sparked by true love, Daphne’s prospects initially seem to be unrivaled. But as her older brother begins to rule out her potential suitors, the high society scandal sheet written by the mysterious Lady Whistledown casts aspersions on Daphne.

Enter the highly desirable and rebellious Duke of Hastings (Regé-Jean Page), committed bachelor and the catch of the season for the debutantes’ mamas. Despite proclaiming that they want nothing the other has to offer, their attraction is undeniable and sparks fly as they find themselves engaged in an increasing battle of wits while navigating society’s expectations for their future.

“My name is Lady Whistledown. You do not know me but I know you,” Andrews continues, revealing, “This is what they have trained for since birth. Which young ladies might succeed at securing a match?” 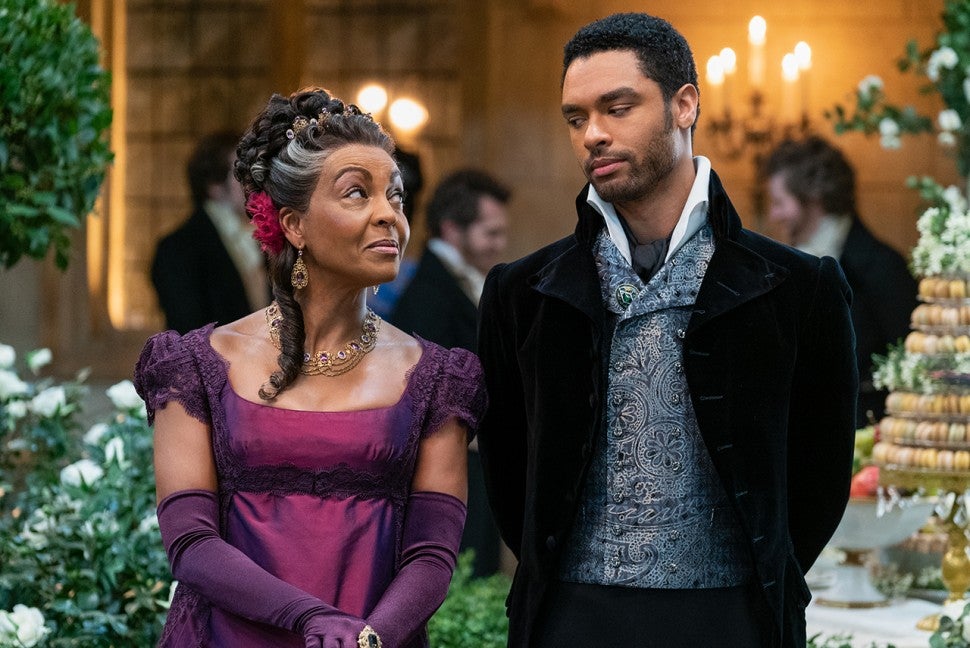 The full-length trailer comes over a month after the first teaser gave audiences a taste of society and scandal awaits as well as ET’s exclusive first look at the entire, expansive Bridgerton family, led by Lady Violet Bridgerton (Ruth Gemmell), as they have gathered around the dinner table for an evening with the Duke and Lady Danbury (Adjoa Andoh).