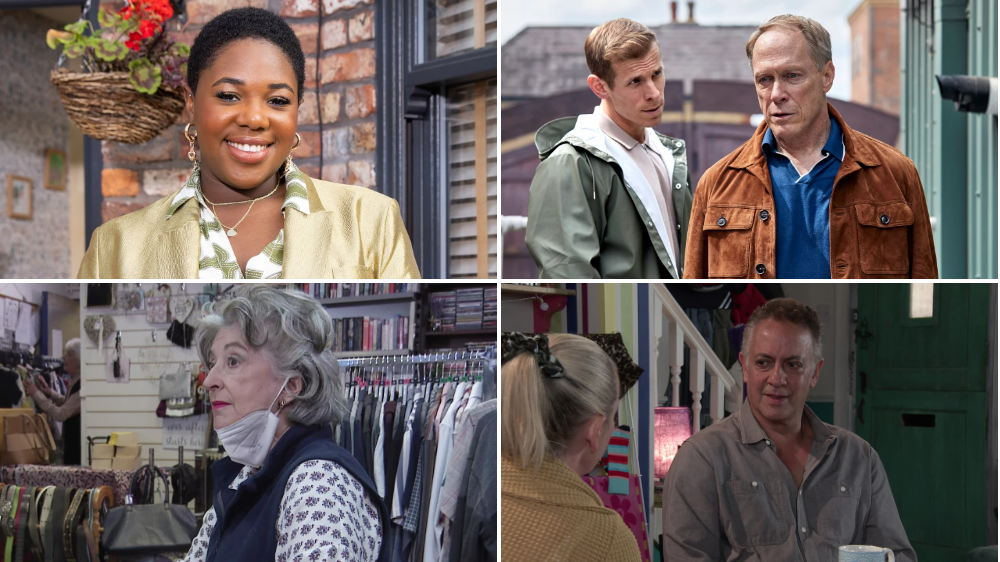 Next week’s Coronation Street picks up the week after the exit of Kelly Neelan (Millie Gibson) – and Dev Alahan (Jimmi Harkishin) is in a particular state, sparking fears for Aadi Alahan (Adam Hussain).

When Dev snaps at Bernie Winter (Jane Hazlegrove) and sacks her; it’s clear he is struggling.

There’s a new face on the Street as the Bailey family welcome sibling Dee-Dee (Channique Sterling-Brown); a lawyer who wastes no time in supporting Stu Carpenter (Bill Fellows).

But it might be too late for Yasmeen Nazir (Shelley King); who is giving up a lot to fund Stu’s quest for innocence.

When Leo’s dad Teddy warns him he’s mad to chuck his life away on a woman twice his age who can’t be trusted, Leo voices his doubts to Gemma. On a mission to prove that Stephen is a liar, Leo speaks to the estate agent who was booked to value Audrey’s house, before eavesdropping on a conversation with Gabrielle.

Contronting Stephen, Leo reveals he heard every word and knows his plan is to get his hands on the equity from Audrey’s house to pay her back. As he follows Leo him onto the factory gantry, Leo taunts him, threatening to call Audrey. How will Stephen react?

The police start questioning over the shooting.

A downbeat James confides in Aggie that he’ll never be the player that he was and his career is all but over. Ed and Michael tell James not to make any rash decisions.

When Bernie accidentally smashes the first golf trophy Aadi ever won while cleaning, Dev’s apoplectic and sacks her on the spot. Desperate for cash, Bernie finds Fern’s card and gives her a call. During Evelyn’s first shift at the charity shop, Joy lays down the ground rules whilst Evelyn is forced to bite her tongue. After making a call Evelyn reveals she’s off to Cornwall for a few days.

Jenny confides in Daisy that she’s worried about Leo as he’s not been home all night and his phone goes straight to voicemail. Daisy suspects Leo might have got cold feet. But is there more to it after his run in with Stephen?

The Baileys are thrilled as Dee-Dee arrives home from America. When James shows her the letter from County offering him a paltry final pay-off, Dee-Dee calls the club and after explaining that she’s a solicitor, demands a meeting. Will Dee-Dee be able to push for a better deal? Meanwhile James gives Lily her first football lesson.

When Yasmeen returns to discover Speed Daal closed and on its knees because of Stu, Yasmeen assures him they’ll rebuild the business and clear his name, no matter what it takes.

Dressed in Fern’s finery and making out she’s got a job interview, Bernie leaves Paul to babysit the quads. What is she up to?

Dee-Dee agrees to take on Stu’s case, pointing out gaps in the police inquiry and suggesting they speak to Bridget and go over her Mum’s statement. When Alya quizzes Bridget about the night of Charlie’s murder, she backs up her Mum’s story. Getting upset, Bridget threatens to call the police.

Meanwhile when Dee-Dee reveals she’s found an address for Lennox, the officer originally in charge of Stu’s case, Stu grabs the piece of paper and disappears. As he hammers on Lennox’s door will Stu get the answers he’s looking for or will he jeopardise his case further?

When Dev apologises for overreacting about the broken trophy, he pours out his heart to Bernie, blaming himself for failing to protect Aadi. Bernie assures him nobody could wish for a better dad and Dev’s touched by her kindness.

James attends a job interview at the Bistro but when he admits to Debbie that he has no interest in bar work and is just trying to appease his family, Debbie’s unimpressed. Meanwhile Lily tells James that she made it onto the football team and it’s all down to him, giving James food for thought.

Teddy calls in the pub and is surprised to see Jenny behind the bar. Jenny explains how Leo left for Canada without her. Teddy asserts she’s only herself to blame.