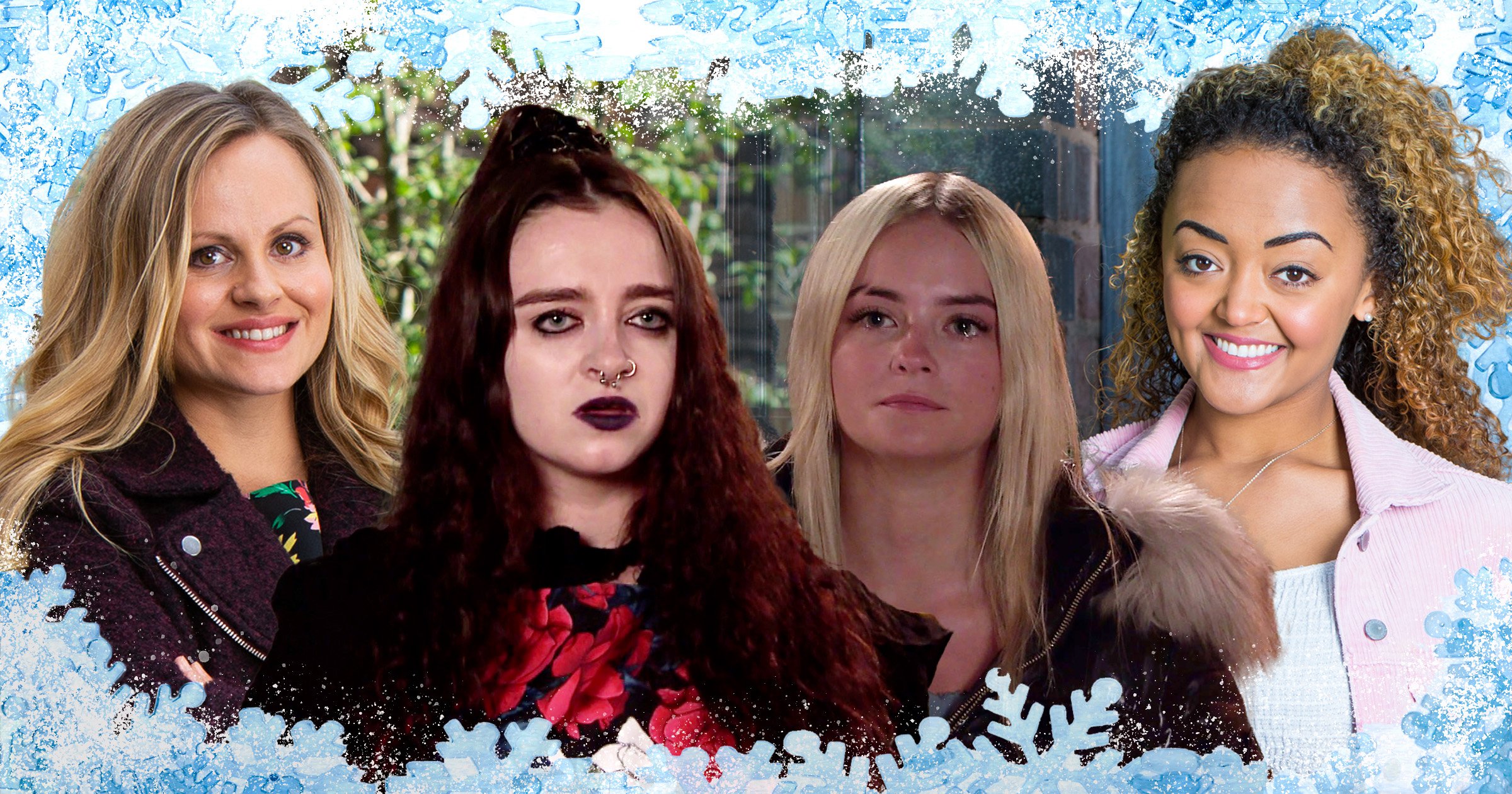 Coronation Street is heading for a mixed theme this year, with several grief stricken characters getting a chance at happiness with a surprise for Nina Lucas (Mollie Gallagher) and Jenny Connor (Sally Ann Matthews).

Elsewhere, romance may be in the air for Tyrone Dobbs (Alan Halsall) as he tries to plant a festive smooch on his ex Fiz Stape (Jenny McAlpine).

Love is a more difficult prospect for Emma Brooker (Alexandra Mardell) though as her wedding is marred by a secret from groom Curtis Delamere (Sam Redford).

Emma couldn’t be more excited about her Christmas wedding to Curtis. The date has been brought ahead due to Curtis’ illness but that won’t put a dampener on their day as the feeling of love is euphoric.

But, as ever in soap, there is a risk that the day could be ruined as it turns out that Curtis is hiding a secret which, if exposed, could de-rail the whole day.

We’ll have to wait and see…

When Roy leaves the Street, Nina is alone and her thoughts of missing Seb consume her leave her miserable.

It seems like her Christmas is doomed to be a sad one but when Carla clocks her mood, she comes up with a plan that could turn things round for Nina.

As she gets a Christmas surprise, will festivity for her follow?

Another person feeling the grief this Christmas is Jenny as she faces the first Christmas without her lost husband Johnny.

Unwilling to embrace the spirit of the festive season, a miserable Jenny hits the bottle. But then the community rallies round to make a huge gesture, will it turn her mood around?

There’s a winter of discontent for Faye – fresh out of prison, she could be heading back behind bars.

When Emma takes her for a driving lesson, she accidentally runs over an old man and she and Emma are left in a panic.

How serious are his injuries and will the police come knocking? Emma soon takes a big risk that could mean trouble for them both…

There is romance in the air for Amy as she gets a new boyfriend – but Steve is less than impressed with her new boyfriend. Is he just being a protective dad or is there more to his concern?

Jacob, who was involved in Harvey’s drug pushing, is set to return to screens and speculation is rife that he could be the lad who Amy falls for…

Tyrone snogs Fiz but will she tell him to kiss off?

Tyrone has been like a kicked puppy since he realised that he still loves his ex Fiz – but she has moved on with a new boyfriend Phill – and everything is hunky dory thank you very much.

However, as festive spirits are flowing, bold Tyrone leans in for a kiss. How will Fiz respond to him making a move – could there be a reunion on the cards?

Sarah and Adam threatened by his ex?

Things between Sarah and Adam are stable – but in true soap fashion this is not set to last very long. When Sarah crosses past with an ex of Adam’s, trouble looks set to follow.

Will Sarah become jealous of her husband’s past and could his ex still be carrying a torch for her?

Kelly’s downfall – can she survive?

Kelly’s life has been falling apart since she was released from prison – rightfull so, claim many fans.

But as the season of goodwill approaches, will anyone reach out? It doesn’t look like it will be Abi as she continues to direct her hate and anger towards Kelly.

A surprise guest for Zeedan

Zeedan continues to hide his money laundering crime from his family but things are about to spiral out of control for him as he faces a dangerous dilemma that could be life changing.

And to add to his troubles, the wife he ditched, Marium, comes calling. But for what purpose and will it bring even more desperate times for Zeedan?