Bradley Walsh welcomed Clint, Rachel, Zanib and Ross onto The Chase to take on Darragh Ennis for the first time. The new chaser, nicknamed The Menace, had a shaky start as both Clint and Rachel made it through to the Final Chase but Darragh quickly knocked both Zanib and Ross out of the competition.

Clint got the team off to a good start on The Chase as he managed to bag £6,000 in his cash builder before outrunning Darragh in the head-to-head.

Rachel was next up and she too managed to outrun the chaser and return to the team with £4,000.

Sadly both Zanib and Ross let their team mates down as they struggled to beat the chaser and had to wave goodbye.

It was up to Clint and Rachel to answer as many questions correctly as possible in the Final Chase to take home a share of £10,000. 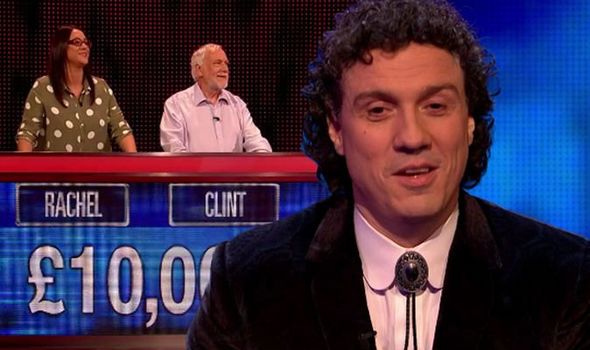 While they got off to a shaky start, the pair worked together to answer 16 questions correctly.

They noted they would need a few pushbacks if they were going to outrun the chaser and thankfully, Darragh slipped up four times.

While Rachel and Clint failed to execute the first pushback, they answered the next three correctly.

It looked like Darragh could lose his first ever episode of The Chase however, he made an incredible recovery.

He raced through his final 10 questions and caught up with Rachel and Clint with just seven seconds left on the clock.

Realising they could have won the Final Chase if they’d executed the first pushback correctly, the duo were devastated.

“Sadly I have to take the 10 grand away and tell you the Chase is over,” Bradley remarked.

Speaking about his first time as a chaser, Darragh added: “Well, I’m a little bit relieved as it looked for a moment I couldn’t catch them.”

He noted it was “unlucky” for Rachel and Clint to lose after they put on a good performance.

“#TheChase The new Chaser must be very relieved at that result,” one viewer posted as another added: “Well done Darragh on a successful debut. #TheChase.”

“I like this new one, seems a sound guy tbf, great final chase that #TheChase,” someone else continued.

Another posted: “Coolest final chase ever. Even with his back against the wall halfway through, Darragh Ennis got the job done. Especially brilliant given it was his first show. #TheChase @bones_giles.”

The Chase airs weekdays on ITV at 5pm.