It looks as if cinema is about to die again. So they say, anyway. Sitting in the dark, watching a big screen with other human beings, enjoying a Choc-top: it's over.

"There is clearly something about cinema that brings out the doomsday rhetoric," said Dennis Lim, programming director at the prestigious Lincoln Center in New York, in a recent Indiewire article on the future of film-going. 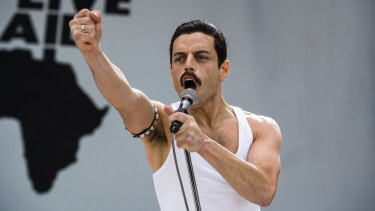 Rami Malek as Freddie Mercury in Bohemian Rhapsody, the only top 10 grossing film in 2018 that wasn’t a sequel or part of a franchise.Credit:Twentieth Century Fox

"This is the invention that one of its inventors declared to be 'without a future' and that has faced successive existential threats from the arrival of sound, television, home video, digital technology, corporate consolidation and so on."

Despite this array of predators, reports of its death have so far proved to be much exaggerated. But what if the doomsayers are right this time? Audiences are declining, presumably because everyone is at home watching streaming services. Nobody seems to know what to do about it. The studios, along with everyone else, talk about the need to adapt to these tricky new circumstances but actually just stick to old things they are fairly sure still work: franchise movies. The cinema chains are right there with them and so, apparently, are the audiences.

Of the 10 top-grossing films in 2017, only one – Jordan Peele's Get Out – wasn't a sequel or part of a franchise. In 2018, the single exception was Bohemian Rhapsody. What this suggests is not so much the death of cinema as much as its transition to a purveyor of stadium-style mass entertainment. For drama, comedy and whoever proves to be the next Bergman or Fellini, we will have to scrabble around the limited menus of the streamers. 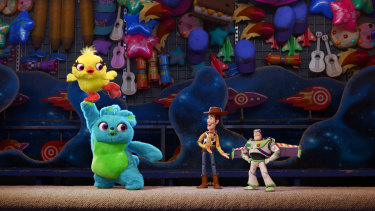 Disney’s purchase of 21st Century Fox in March has created its own pall of gloom. Pictured is a scene from Toy Story 4.Credit:Walt Disney

Indiewire's piece ran in response to a New York Times' survey of 24 industry insiders about the now and future movie business. Sony chairman Tom Rothman told them that in Hollywood they talk about "theatricality": whether a film has sufficient pull to make people leave their houses, go to a cinema and pay as much for a ticket as they pay for a month of Netflix. The general view seemed to be that if a film doesn't involve people in capes or princess crowns, it's unlikely to cut it.

Disney's purchase of 21st Century Fox in March has created its own pall of gloom. Over a decade of aggressive acquisition, the House of Mouse has gathered up Pixar (Toy Story and its spin-offs), Marvel Entertainment (The Avengers et al), Lucasfilm (Star Wars) and now Fox, which rounds out its prime content with the X-Men and the forthcoming Avatar sequel. Further expansion is slated for the end of the year, when it launches its own streaming service Disney+, offering the accumulated riches of all its properties at precisely half the price of a Netflix subscription.

But even before the Fox acquisition, Disney was already the undisputed industry behemoth. The four top-grossing films so far this year are all Disney movies. The new animation of The Lion King, out this week, may outstrip them all. All share the same technical brilliance, conservative values and rousing sentiment. It's a house style that doesn't bode well for innovation.

What this means for Fox Searchlight, the old Fox studio's arthouse offshoot, is still up in the air. Pessimists, including many former Fox employees now crowded nervously under Disney's umbrella, fear that movies like The Shape of Water or The Favourite – the kinds of films that have won Fox a slew of Oscars but rarely make a lot of money – won't figure large in the mega-studio's corporate strategy. There's a major avenue for independent film distribution potentially gone. Soon enough, according to the doomsayers, there will be nothing out there but a few tent poles and lot of tumbleweeds. 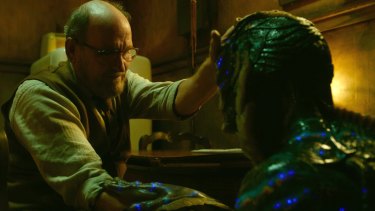 Richard Jenkins, left, and Doug Jones in a scene in The Shape of Water.Credit:Fox Searchlight Pictures

So that's the bad news. Some industry players – including some of those quoted in the New York Times, don't actually think it's bad at all. Director Ava du Vernay (Selma, 13th) pointed out in the New York Times that the streaming services had opened up possibilities for directors and performers who would never have got a foot in a studio's door – particularly women and minorities – to make mid-budget movies that studios no longer make. Some aren't even in English! So we have Netflix to thank for Alfonso Cuaron's Roma, Amazon for Manchester By the Sea; there is also "golden age" television on the streamers and other services that critics sometimes say are better than films anyway.

Watching a big TV at home is nothing like going to a real cinema, though, is it? The thing about a cinema is that you can't pause or turn off the movie. For two hours, you do this thing. It is a particular kind of engagement. And I don't see that dying.

"The takeaway from the New York Times'  piece is not that movies are dying, it's that Hollywood is in trouble," Dennis Lim went on to say in Indiewire.

"If Hollywood is struggling, maybe it is time to reframe this tired discourse and remind us all that cinema is about a lot more than Oscar movies and summer tent poles. I watch hundreds of new films from around the world every year and I find it hard to be pessimistic about cinema as an art."

That really is the nub of it. I watch a couple of hundred films a year too, mostly at festivals. A few are destined for commercial release and the awards circuit. Some will be included in the annual film festivals in our capital cities or the mini-festivals of Scandinavian, French, Italian or Jewish films that Palace have turned into a year-round calendar. Then there are the dozens of films – some remarkable, some that fall short but are still interesting – that unfortunately nobody who reads this newspaper will ever see. The vigour and diversity of film-making in these times, when anyone can make a film on a phone, is dazzling. 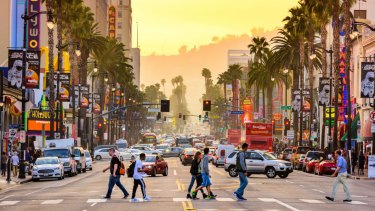 And the audiences are there. Tickets to next week's Melbourne Film Festival are selling as fast as always. If an unknown film is part of a festival, we are much more inclined to give it a try. If a screening is presented as an event – perhaps a with a director Q &A and a possibility of wine – put on by a boutique cinema we trust, we'll be there. Cinemas of that kind certainly are not dead. The perils promised by Netflix have not prevented a cluster of cinemas opening or re-opening just this year – the Event in Sydney, the Thornbury and the Capitol in Melbourne – along with pop-up cinemas happening in neighbourhoods where the last picture show is a pre-television memory. And that is a worldwide trend.

It is true that audiences are getting older; the same people who went to all-night marathons at Glebe's Valhalla in the '70s are the backbone of the arthouse audience now. Among younger audiences, serious films may be a minority interest – but then, perhaps they always were.

Of course there are challenges to anyone trying to make films and get them seen, but the challenges are too often described from the perspective of big beasts looking to make a killing. "We have to broaden the conversation about the 'future of cinema'," as one independent theatre owner told Indiewire.

"The world inhabited by the indies, including the distributors, arthouse exhibitors and independent filmmakers, is a different planet from the Hollywood universe."

And the truth, as they say, is out there.