Home » TV & Movies » Dick Strawbridge says he will never leave Escape to the Chateau: ‘Will be here forever’

Dick Strawbridge says he will never leave Escape to the Chateau: ‘Will be here forever’

Escape to the Chateau: Angel and Dick struggle to get on a roof

Dick, 61, and his wife Angel Adoree, 42, previously lived in a two-bedroom flat in Essex with their two children, Arthur and Dorothy, before making the move to France in 2015. They bought a rundown 18th Century castle and this became their project, with cameras documenting their renovation of the establishment for Escape to the Chateau. Now six years on from pursuing their dreams, the couple have created not only a home for themselves but a bespoke property to accommodate holidaymakers and wedding ceremonies. Having enjoyed huge success with their Channel 4 show, Dick has explained it seems this is his family’s forever home.

It was during an interview with ITV’s Lorraine last summer that the father-of-four made the revelation whilst speaking to stand-in presenter, Christine Lampard, 42.

Discussing their joy with the renovations they had made, Angel firstly said: “We fell in love with it on day one and I don’t think we have stopped that same love.”

Dick then added: “It’s very comfortable and we’ve got a lot more projects to do. But this is our life, this is where we are and the idea of moving, we can’t even think about it.

“We want to be here forever. And consequently, we’re still evolving and we’re having a ball as a family – we’re here to live our life!”

Therefore, it seems the couple are content with living in their Chateau and the property will be the backdrop for many more shows to come. 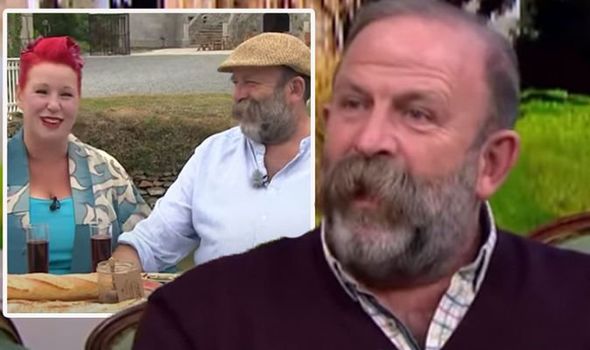 The father-of-four also said on the idea of leaving his beloved Chateau: “I’ve got no intention of going anywhere.

“I’m going to be planted here. I get a headache even thinking about moving,” he added, describing his pain of even considering moving on to HELLO! Magazine.

Angel detailed how the couple’s children are already making plans to put their mark on the establishment in the future.

Despite being in the midst of a pandemic, the family have still managed to film new episodes of their Channel 4 series but fans will be able to get up, close and personal very soon.

We want to be here forever

Next year, the couple are going to be going on a nationwide tour to give their fans some never-before-revealed tips and tricks for renovating a home.

The couple shared the news on their official Instagram account, telling their 238,000 followers how to get their hands on a ticket for the Dick and Angel’s Dare To Do It Tour.

Accompanying a promotional image for their new project, the couple wrote a caption that explained Arthur and Dorothy would also be joining them.

“[They’re] going back on the road, travelling the UK to share all things Chateau, and the story of how and why they dared to do it! With plenty of fun, laughter and surprises along the way,” it read.

Fans were delighted to hear this news, with one excited follower replying: “Just booked and in my home town…so excited.”

Another posted: “Come to America! You’re both so talented and just downright nice people,” with a third sharing: “See you in Cardiff, I’m coming.”

“I’ve booked mine,” a fourth declared, with a fifth stating: “I’ve just booked. Finally, something to look forward to.”

A sixth went on to explain the family had already given them the inspiration to pursue their own dreams, writing: “We did it. We sold our city house and moved to the country. Ours is not a Chateau in France, but a house with a garden on a river in rural Canada. Thank you for showing us anything is possible. Cheers to your family.”

With much intrigue into their renovation work, the couple have told their fans it has been no easy feat to succeed.

Dick explained: “Everything we do is thought through. It took us four years to find the chateau that we bought.”

Angel added: “You have to work backwards when buying a property. What do you want your life to be?

“We had a set of skills and we had to work out how we could combine them in a life where we did not have to go to work in an office every day and could run a business that would work well,” she told MailOnline.

Escape to the Chateau is available to stream on All4.