Did Tom Holland And Zendaya Just Confirm Their Romance?

Well, finally, many fans are saying. “Spider-Man” Tom Holland and Zendaya seem to have confirmed they are a couple, after all. But first, let’s backtrack… “Tomdaya” rumors began percolating in 2016, per J-14, when the pair started posting their hang sessions, like this summery poolside photo on the usually private Holland’s Instagram. It had just been reported by The Wrap that Zendaya, an ex-Disney teen sensation, was to play Holland’s Spider-Man’s iconic love interest, Mary Jane (or a version called “MJ,” as per MTV) in 2017’s “Spider-Man: Homecoming.” Because fans love little more than an attractive onscreen couple translating their romance off-camera, the gossip mill for Tomdaya began spinning.

And spin it did. After a source told People in July 2017 that the couple had “gone on vacations with each other,” Zendaya took to Twitter. “My favorite is when it says we go on vacations together HA! I haven’t been on a vacation in years! hbu @TomHolland1996 ???” Zendaya laughingly tweeted. Zendaya even shooed off dating rumors to Variety that year, saying Holland was “just one of my best friends.” A December 2017 report by Page Six of the acting superstars dining in New York (with Zendaya’s parents) didn’t tame the gossip, however.

Now in July, the same outlet has shared the first real piece of possible proof Tomdaya is on. Keep reading for how the two just made fans very happy.

Tom Holland and Zendaya just made it "PDA-official" 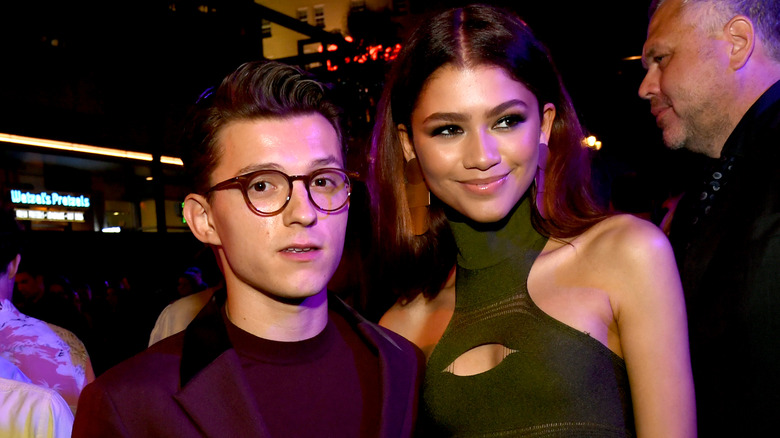 In photos a long time coming (at least for many fans), “Spider-Man” stars Zendaya and Tom Holland were photographed canoodling inside Holland’s sports car in Los Angeles on July 1, Page Six reported. Heartily sharing a laugh in one photo and Holland cradling Zendaya’s face leaning in for a kiss in another, the pair seemingly has unofficially confirmed “Tomdaya” as an offscreen reality. The pair were even spotted that day with her mother, Claire Stoermer, exiting a home in the area, per the outlet. I mean, what platonic friends share car smooches and hang with family all on the same day?

But the pair clearly took time off if their dating history extends back to 2017, as a People source claimed. Holland has been linked to Olivia Bolton, a family friend, per The Sun, and he was seen holding hands with her in July 2019. By April 2020, however, sources told The Sun they were done-zo and simply wanted to “be friends.” As for Zendaya, she had her own complicated maybe-relationship timeline, per Elle, with “Euphoria” co-star Jacob Elordi, but that also ended sometime in 2020, especially after Elordi was seen holding hands with model Kaia Gerber in September.

With their strong foundation of a best-friendship (Holland even called Zendaya one of his acting mentors with Backstage in February), Tomdaya sure seems to have what it takes to make it last — what good news for fans of this fall’s “Spider-Man: No Way Home.”