Home » TV & Movies » ‘Don’t want them next to me, exercise their freedom at home’ Edwina Currie hits out on GMB

‘Don’t want them next to me, exercise their freedom at home’ Edwina Currie hits out on GMB

During Monday morning’s Good Morning Britain, Edwina Currie spoke with hosts Kate Garraway and Adil Ray about whether the Covid-19 vaccine should be made compulsory. The former MP made her feelings clear about having the vaccine and protested that people who refuse to have the vaccine should keep away from her and should stay at home.

“I hear what everyone says about freedom but they’re so keen on freedom that they’re going to restrict my freedom and that of millions like me,” Edwina began.

“Well, over 31 million people have had their first vaccination now and that includes quite a lot of people under 50, who have underlying health issues, people who are more at risk.

“We’re powering out with that, all this weekend we have probably vaccinated another million people. I think it’s brilliant.

“And, if you add to that a negative test if you’ve not been vaccinated, I mean what’s not to like, I could go to the theatre.” 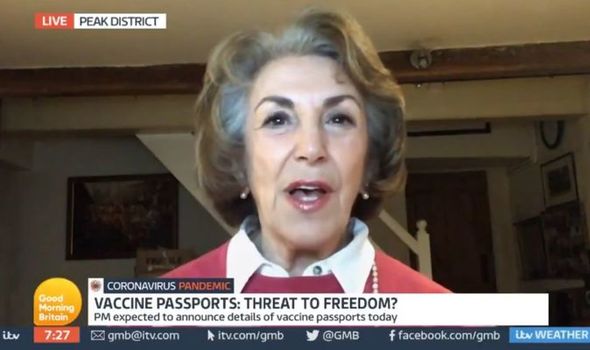 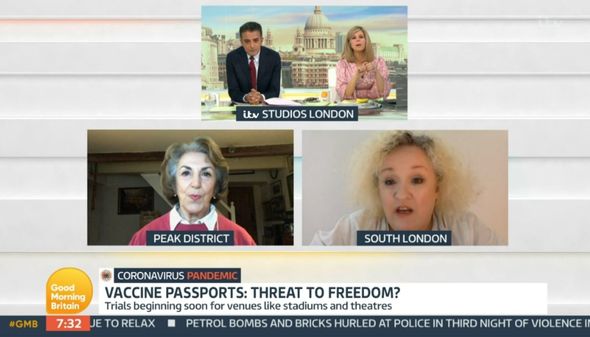 She continued: “I’ve got tickets to see Bob Marley in London, it means my brother could go and see Liverpool, his beloved football club.

“It means my grandchildren can go to a club, we can get out and about and enjoy our freedom once again.

“And if it encourages a few more people reluctant to join the majority and get vaccinated, that’s got to be a good thing too.”

Adil Ray went on to quiz the former MP on whether vaccines should be made compulsory if people are refusing to have the jab. 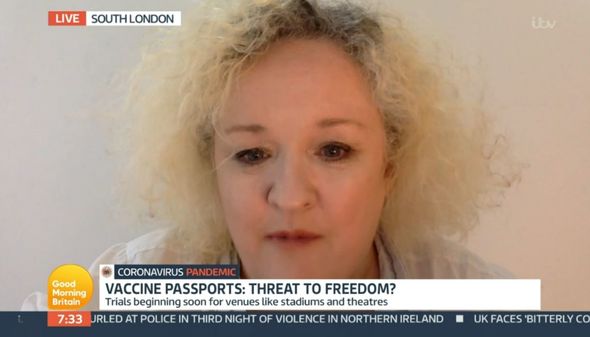 Edwina added: “We haven’t had a compulsory vaccination in the country since I was a little girl.

“I hear what you’re saying. I don’t want them (people who refuse the vaccine) sitting next to me in the theatre.

“I don’t want them near me – they can exercise their freedom at home.

“The main side effect of being vaccinated is itchy feet, we are the majority, I think our voice needs to be heard.”

Comedian Abi Roberts also appeared on the ITV programme via video link and in response to Edwina’s comments, she said the proposal to issue vaccine passports reminded her of her experience as a child living in the USSR.

Roberts insisted people should not be required to show their papers in order to access entertainment venues nor to travel abroad, warning about such certification could have on individual freedoms.

“I didn’t realise I’d woken up in the UKSSR under the Communist-servative Party run by Boris Johnson,” Roberts responded.

“I should explain I’ve lived in a totalitarian regime, I’ve been to the Soviet Union when I was a kid in the 80s and this is all very reminiscent of the time when you’d hear people say, ‘papers please.’”

She continued: “I do not want to live in a totalitarian police state, thank you very much.

“I went on a march to protest freely and peacefully in a country that I’m proud of and [Winston] Churchill, we should thank him for pushing fascism back.

“We don’t want fascism to take root in this country and to start to divide people into those who have vaccines and those who haven’t.”

The discussion certainly caused a stir online and saw many viewers taking to Twitter to air their thoughts.

One fan tweeted: “Bring on the vaccine passports if it’s going to help us get back to normal.”

Another commented: “I work for the NHS know many people who have got poorly and died from COVID. But I will NOT be having my vaccine and I know many NHS workers not having it. We should have a right to choose!”

A third added: “I think to not have a passport will damage the economy. The majority will not be comfortable with mixing with the minority anti-vaxxers and anti-passport. The minority can carry on spreading and infecting whilst the majority will stay home. Test accuracy is a concern.”

Good Morning Britain airs daily at 6am on ITV.