Ellen Pompeo has played Meredith Grey on Grey’s Anatomy for 18 seasons now, so it’s safe to say she’s worked with a lot of different talent over the years. The ABC series has had a revolving door of main cast members and guest stars, and many of the latter have returned over the course of its run. That includes Kate Walsh, who Pompeo claims is hilarious on set — so much so that you might just “pee your pants.”

Ellen Pompeo reunited with Kate Walsh during Grey’s Anatomy Season 18, but that’s not all they’ve done together recently. Pompeo also welcomed her Grey’s costar as a guest on her Tell Me With Ellen Pompeo podcast. And during their conversation, she admitted that Walsh is one of the most hilarious people to have on set.

“If Kate was on set, you knew you were going to pee your pants — like, literally pee your pants laughing,” Pompeo said. “Because you are super funny. Kate literally is the funniest b****. She’s so funny.”

With Grey’s tackling such serious subjects over the years, it must be nice to have actors who brighten the mood. It seems Walsh fills that role when she’s around. Of course, sometimes original cast reunions also bring out the waterworks — but it’s probably more heartwarming than heart-wrenching when that happens. 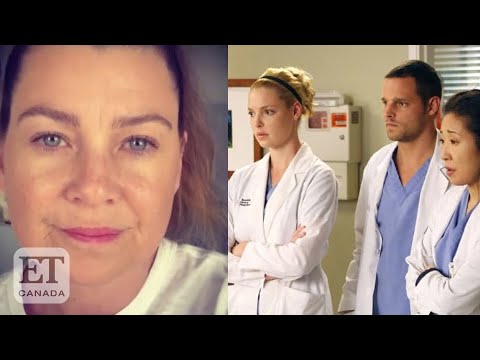 Ellen Pompeo may get a kick out of Kate Walsh’s antics, but the Grey’s Anatomy star admitted catching up with original cast members can get emotional.

During a 2021 interview with People, Pompeo expressed her excitement about seeing Walsh again, emphasizing that she feels similarly about all her original Grey’s costars:

“I have so much affection and love for the original cast. We all went through something that only we can understand. So it’s always just really fun and very emotional, to be honest. When any of the original cast members get together, we always start crying, and we’re like, ‘Why are we crying?’”

Given how long the group has known one another and how much time they spent together on set, it’s probably no surprise reunions leave them feeling nostalgic.

“We created something so special together,” Pompeo told People. “That’s a once-in-a-lifetime thing.”

Their accomplishment is even more impressive because Grey’s Anatomy is still going. New episodes air on Thursdays on ABC.