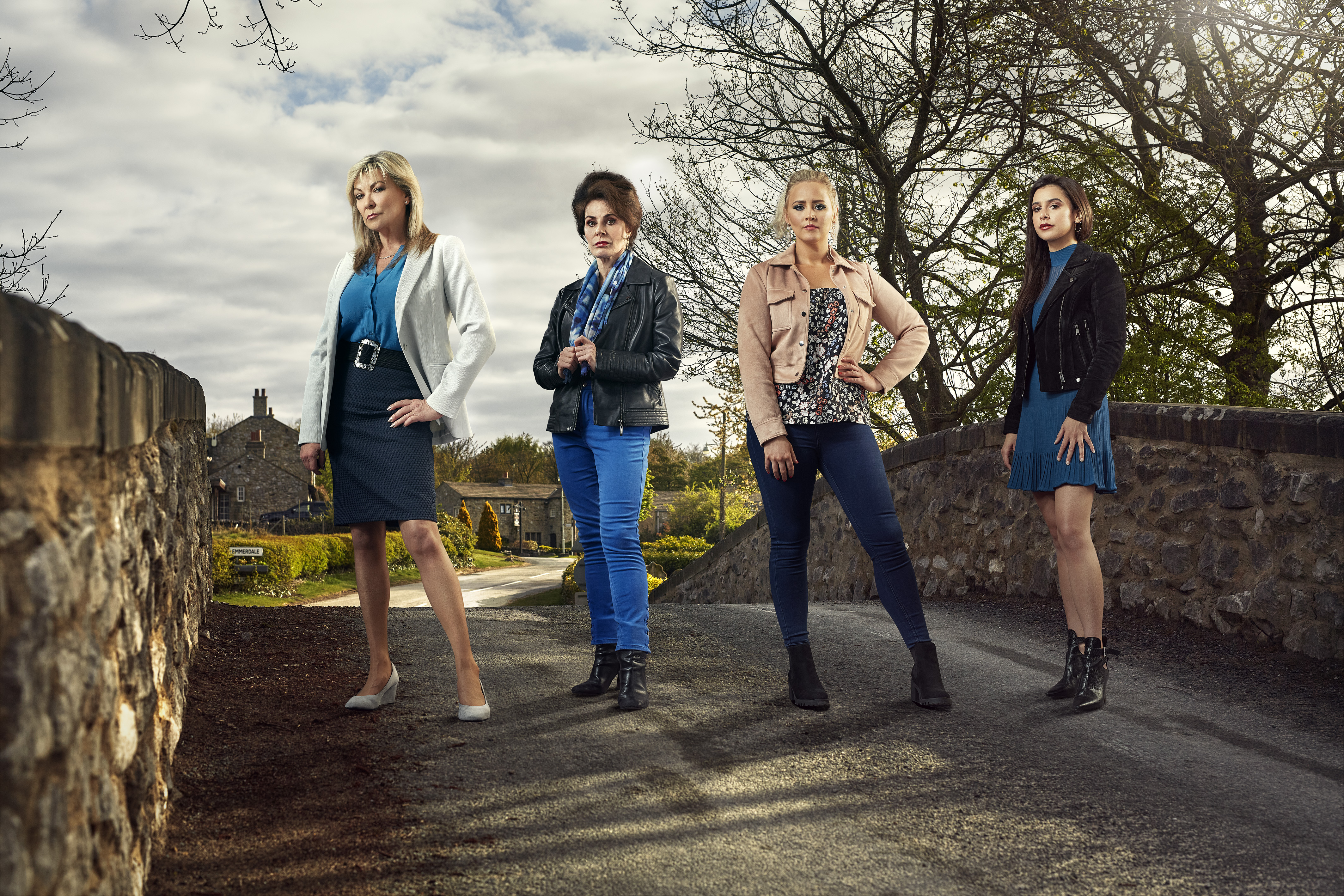 Emmerdale is set to mark the summer in an explosive way, with a series of stories that will see things well and truly heat up in the eponymous village.

Kim Tate is hellbent on exposing her poisoner after discovering that one of her nearest and dearest was out to destroy her.

After cleverly setting a plan in motion last week, the question is: will she succeed?

‘Over the last few weeks we’ve seen her start to see her doubt not only her own sanity, but also the people she loves the most about who it is that’s trying to bring about her downfall.

As her paranoia reaches boiling point, she will stop at nothing to ensure she catches the culprit responsible for trying to instigate the downfall of Kim Tate, but as with all best laid plans, they all don’t go accordingly – will her plan to catch the person responsible bring about her own downfall?

‘Will she end up paying the ultimate price? What happens to Kim and how does her plan backfire? Those are the questions as we move into the nxt few weeks. It’s Kim Tate and Home Farm, it’s laden with twists and turns and brilliant escapism at its best.’

Faith Dingle, meanwhile, has found her loyalties divided between her family and love of her life Eric Pollard (Chris Chittell). In spite of her efforts, she hasn’t been able to win back Cain’s (Jeff hordley) affections, nor has she been able to convince Eric that she belongs with him.

But what does the Summer hold for the character?

‘Since returning to the village, the spirit of Faith has been a constant whirlwind of chaos and mischief,’ Kate told us. ‘However, will see her health start to decline, and she worries here cancer has returned.

‘Her fears over her health and future brings everything into sharp focus, and as she realises what is important, – Cain and Chas – will she be able to tell her kids the truth? Or in Faith Dingle style, will her lies leave a trial of destruction in her wake? It’s a heavy story, but there is lots of fun along the way, as Faith entangles Pollard and Brenda into her world.’

Tracy Metcalfe has been struggling since giving birth to daughter Frankie. Kate has confirmed that this is just the beginning of a long-term storyline, as the character will struggle with postnatal depression.

‘Everybody loves Tracy,’ the producer added. ‘She’s Funny, feisty and full of life, but over the past few weeks she’s struggling to adapt to life as new mum. It’s a heartbreaking but very real story about postnatal depression, and how it can affect people with no prior warning.

Even those who have it all – an adoring partner and a textbook baby. The truth about how it impacts on people’s lives. We worked extensively with numerous charities to tell a very raw and very honest story about how postnatal depression effects Tracy and her family around her.

‘1 in every 10 women develop postnatal depression. It’s a very real and important story to tell. This story will be hard to watch at times, but ultimately, it’s a story about love and hope, and we do hope that it will offer comfort to those going through a very similar experience.’

Scheming Meena Jutla has caused nothing but chaos since her arrival in the village, but it appears as if we’ve just scratched the surface with what the character is capable of, as she takes centre stage this summer in all her conniving glory.

‘Meena rocked up in the village and manipulated her way into people’s affections,’ added Kate. ‘Now, she’s all loved up with David. This is a woman who will do anything to get what she wants, and woe betide anyone who gets in her way!

It’s the start of a really gripping and enthralling story that will leave viewers on the edge of their seats, and shouting at their television as they struggle to keep up with Meena’s impetuous and volatile ways. It’s a real whirlwind of a story that will hopefully get the nation talking and guessing about what’s going to come next.’

Sounds like one hell of a summer in the Dales, eh? Well, that’s not all you have to look forward to, as Kate also teased two other huge stories that will keep us entertained during the next few weeks.

‘Liam and Leyla’s wedding. It’s a joyous, fun packed summer between unlucky-in-love Leyla and Liam. However, will Leyla get her happy ever after with Liam? Or will Bernice scupper what’s meant to be the best day of her life? It’s funny, warm and romantic and it’s pitting Bernice and Leyla against each other as they wrestle for the heart of Liam  -but who will win that heart?’

‘And Emmerdale’s first ever Pride event! People have had a tough time lately, we wanted to bring joy and colour to the village. It’s jampacked with fun and bursting with celebration, not to mention the fabulous guest appearance by The Vivienne which is just fantastic.

‘We wanted to showcase Emmerdale at its vibrant best – this episode isn’t just a riot of colour, it’s an important episode about acceptance and keeping the spirit of Pride alive even during the darkest of times.

If you’ve got a soap or TV story, video or pictures get in touch by emailing us [email protected]ro.co.uk – we’d love to hear from you.