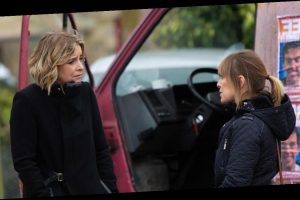 Emmerdale's Charity Dingle showed off a new shorter hairstyle on Friday night's episode which set fans in a spin, mainly because it probably wasn't the best timing, considering her current storyline.

Charity had been sick with worry in the last episode following the disappearance of her fiancée Vanessa Woodfield, who was kidnapped by evil Pierce Harris.

As she appeared in the opening scenes of the episode, running into Tracey and Rhona, and worryingly asking them if they had seen Vanessa, neither acknowledged her new look, and there was no other explanation for it throughout the episode.

Fans of the ITV soap seemed to find it odd and even hilarious that Charity seemed to have found time to go and get her hair done despite being so preoccupied with Vanessa's disapperance.

Taking to Twitter to air their views, one viewer posted: "And in the midst of being annoyed that Vanessa hasn't been in contact, Charity has had a hair cut".

Elsewhere on Twitter fans were split on whether or not they approved of the new look.

One tweeted: "Spot the difference!!! Yes Charity what have you done where's your sexy shaggy hair gone? It's went A.W.OL" alongside a broken heart emoji.

While another said: "Putting out a search party to look for Charity's missing gorgeous sexy shaggy hair." The tweet included a gif featuring cartoon character dog Scooby-Doo and the rest of his gang looking around, as if searching for Charity's old hairstyle.

However, there were also plenty of supporters for the new cropped look.

"I'm personally living for Charity's new hair" said one fan, adding: "I'm not living for how sad and frustrated she is."

Others posted "OMG Charity has cut her hair. It brings back memories of how it used to be" and "Charity's new hair is everything" adding the fire emoji for impact.

There were also some who remained unsure, with one user to the site saying: "So what's the verdict? Do we like Charity's new short hair or not?"