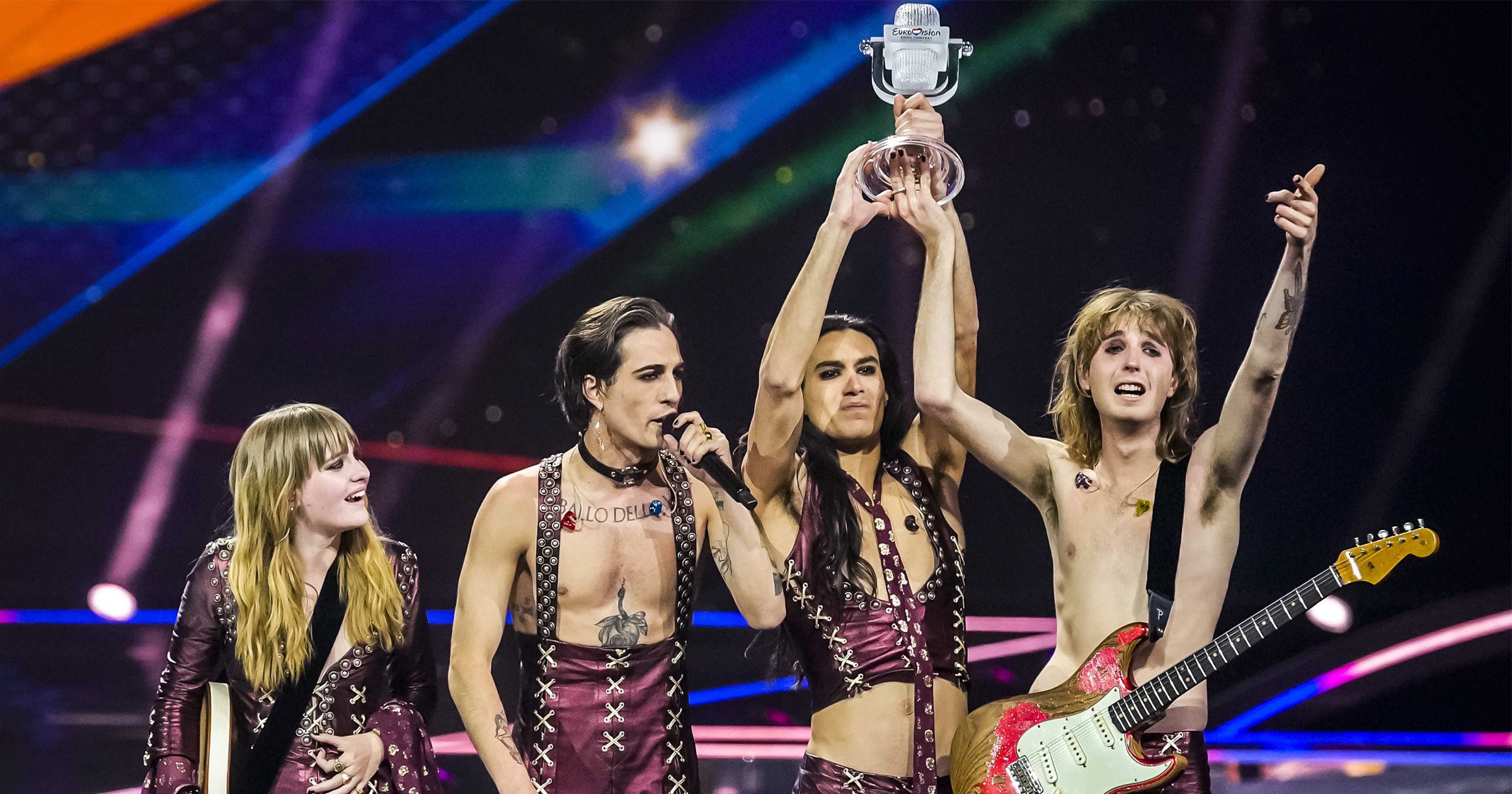 Italy has won the Eurovision Song Contest 2021 with a total of 524 points, with Switerland coming in second place.

The music competition made a comeback this year after taking a break in 2020 due to the coronavirus pandemic.

And it certainly didn’t disappoint as a variety of weird and wonderful acts took to the stage on Saturday night.

The event in Rotterdam was a scaled-down affair, with just 3,500 fans in the Ahoy Arena under strict instruction to stay seated.

But too-cool-for-school rock band Måneskin showed their excitement when they triumphed thanks to their riff-driven Zitti E Buoni (loosely translated as ‘shut up and behave’).

Once the popular vote from the public was opened and the votes were revealed it was a feeding frenzy as countries with only a few points from other nations rocketed to the top of the leader board.

The countries that made it into the top five were Italy, France, Iceland, Switzerland and Ukraine.

Before Italy was announced as the winner, Amanda Holden revealed the country Britain chose to give 12 points.

The television star looked glamorous in a tan dress with plenty of glitter as she appeared on screen.

She said: ‘I love Eurovision! All the drama, all the excitement and I love how camp it is!’, before revealing the United Kingdom awarded maximum points to France.

The UK was represented by the older brother of chart-topping pop star John Newman, James Newman who performed track Embers.

He qualified automatically because the UK holds one of the guaranteed spots in the final as a major financial supporter of the contest.

However, he scored zero points from all countries and gained nothing in the popular vote.

But James was not disappointed with his performance, writing on Twitter after taking to the stage: ‘That was amazing.’

James’ song swept up the iTunes chart to number six after his performance.

The singer left viewers at home and UK host Graham Norton confused by his performance as he was joined on stage by a person dressed as a hand giving the peace sign.

The upbeat track is a missive to haters, as the 26-year-old is telling them that their words will not stop him from living his life.

Despite the positive meaning behind the track, people expressed their distaste for it from their sofas at home.

Making his disapproval of the song quite clear, Graham said: ‘This song is like Marmite if everyone hated Marmite.’

‘Germany clearly in financial turmoil and fearing a win would make them have to host,’ one person joked.

‘The only word that can sum up that performance is bizarre,’ one person wrote.

Eurovision viewers were so impressed by Iceland act Daði & Gagnamagnið after they put on a colourful performance of their song 10 Years that they hailed them as their winners early in the competition.

The band have not had the best of luck so far as they were hoping to take home the crown at last year’s competition before it was cancelled due to the coronavirus pandemic.

And this week a member of the group tested positive for Covid-19 ahead of their semi-final effort.

However, their 2020 song Think About Things went viral on TikTok after 2020’s cancellation and they left the audience at home delighted by their 2021 performance.

While someone else was already making plans to get concert tickets: ‘Yeah I’m gonna need to see Iceland live #Eurovision.’

‘Tune last year (still listen to it on Spotify), tune this year. Iceland for the win at #Eurovision. Gets my vote #ISL #Iceland,’ wrote another Twitter user.

If you’ve got a celebrity story, video or pictures get in touch with the Metro.co.uk entertainment team by emailing us [email protected], calling 020 3615 2145 or by visiting our Submit Stuff page we’d love o hear from you.