Home » TV & Movies » Everything You Need to Know About ‘Cursed,’ Netflix’s ‘Game of Thrones’-‘Hunger Games’ Hybrid

Everything You Need to Know About ‘Cursed,’ Netflix’s ‘Game of Thrones’-‘Hunger Games’ Hybrid 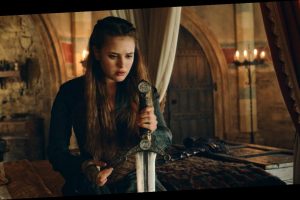 Cursed, Netflix’s newest fantasy drama, will hit streaming on July 17, and it will absolutely fill the Game of Thrones–slash–Hunger Games–shaped hole in your heart. Starring Katherine Langford (a.k.a. Hannah Baker from 13 Reasons Why), the show is described as “a reimagining of the Arthurian legend, told through the eyes of Nimue, a teenage heroine with a mysterious gift who is destined to become the powerful (and tragic) Lady of the Lake.

“After her mother’s death, she finds an unexpected partner in Arthur, a young mercenary, in a quest to find Merlin and deliver an ancient sword. Over the course of her journey, Nimue will become a symbol of courage and rebellion against the terrifying Red Paladins, and their complicit King Uther,” Netflix’s official description of the show continues. Based on that alone, we already see the weapon-slinging Katniss Everdeen vibes plus the mystical magic of Game of Thrones. And it’s only heightened by the photos Netflix released from Cursed on May 7:

Plus this short teaser, which was released a few weeks later:

And now we have the first, full-length trailer of Cursed. Netflix released it on Tuesday, June 30. Watch it for yourself, below.

Cursed’s premiere date isn’t that far away—but to satiate your appetite, here are all the details we know about the show so far:

Episode count: There will be 10 episodes of Cursed’s first season.

The source material: An illustrated novel of the same name by Frank Miller and Tom Wheeler. Both created the TV series and serve as executive producers. “Realizing these characters from page to screen was a unique and thrilling creative challenge,” Wheeler told Entertainment Weekly. “I think first and foremost when casting for Cursed, Frank and I were looking for a mythological truth, actors who could bring the emotion and the humanity to legendary characters without losing the sense of elemental magic and epic stakes. Led by Katherine Langford, who is equal parts classic hero and sword-swinging badass, this extraordinary cast has brought such depth, commitment, and heart to this story. We can’t wait to introduce them to audiences around the world.”

What can fans expect? “I think with Cursed, because it’s so different, everyone is going to take something different away from it. It has a little piece of epic, a little piece of fantasy, and a bit of history,” says Langford in a statement sent from Netflix. “It’s tragic, but it’s also full of love. It’s funny, but it’s also devastating. It’s a story that we think we know so much about, but we’ve never seen in a way before like this.”

Release date: As we said, be on the lookout for Cursed on Netflix July 17.