Home » TV & Movies » From Arrow to Crisis on Infinite Earths: Inside the Arrowverse's evolution

From Arrow to Crisis on Infinite Earths: Inside the Arrowverse's evolution 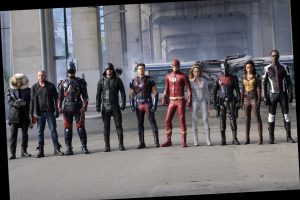 A version of this story appears in Entertainment Weekly’s Ultimate Guide to the Arrowverse. Pick up your copy on newsstands today, or buy it online!

There was never supposed to be an Arrowverse. Seriously, it wasn’t planned.

“A lot of people like to think we did,” says Arrowverse architect Greg Berlanti. “Each step was a surprise.”

When Arrow, the shared universe’s namesake that stars Stephen Amell as the Green Arrow, premiered on The CW in 2012, the producers were repeatedly asked if they would introduce other heroes with superpowers. “The answers to all those questions were, ‘No, no, and no,’” says Arrow co-developer and consulting producer Marc Guggenheim. “None of those interviews have aged particularly well.”

He’s not wrong, because in the past eight years The CW has become the home of six DC Comics shows that exist in the same TV universe and interact (at a minimum) on a yearly basis: Arrow, The Flash, Supergirl, DC’s Legends of Tomorrow, Batwoman, and Black Lightning. “If I had to pick one word, I’d say ‘unbelievable,’” says Guggenheim about the universe’s very existence and annual crossover events. “The truth is [the unexpected expansion] really speaks to my whole philosophy about building a universe. The best way to do that is to do one good show. That one is really hard. Then if you succeed, do a second really good show.”

And if you produce six good shows? Well, then you attempt your most ambitious crossover yet, “Crisis on Infinite Earths,” a five-hour adaptation of Marv Wolfman and George Pérez’s multiverse-destroying epic that rocked DC Comics in 1985 and 1986 (begins Sunday, Dec. 8 at 8 p.m. with Supergirl).

In a way, the road to “Crisis” began midway through Arrow’s first season when Berlanti started toying with the idea of bringing in the Scarlett Speedster, his favorite superhero. After talking to Warner Bros. TV and The CW, Glee’s Grant Gustin was introduced as a pre-superspeed Barry Allen in Arrow’s second season before headlining The Flash, which debuted in fall 2014.

Despite Arrow’s success, the producers were worried about The Flash because of the special effects required to render the hero’s powers. “It’s famously what put the original Flash show out of business years ago; they couldn’t get the episodes done in time,” says Berlanti. But The Flash did work, and remains the network’s highest-rated show six seasons later.

In December 2014 they attempted something even more adventurous: a two-night crossover between Arrow and The Flash. “[CW President] Mark Pedowitz was like, ‘I want to cross over these two shows,’” says Guggenheim. “Greg and I both grew up on The Six Million Dollar Man and The Bionic Woman. In all honesty, [those two shows] were the inspiration from the crossover.” He adds, “The first Flarrow crossover was so hard at the time, but looking back on it, it was embarrassingly easy because it was a crossover in the sense that Oliver appeared on Barry’s show and Barry appeared on Oliver’s show, but the two storylines of each episode were relatively separate from each other. So, it wasn’t that narratively ambitious.”

The universe continued to expand. In 2014, now Warner Bros. president Susan Rovner met with Berlanti and company about developing a show about Supergirl, Superman’s cousin. “I thought it was a fantastic idea,” says Arrowverse EP and Berlanti Productions president Sarah Schechter. “I remember [Greg] said to me, ‘I think I figured out Supergirl. It’s Ginger Rogers. Ginger Rogers had to do everything Fred Astaire did but backward and in heels.’ That really resonated [with me] as a woman working in this business.”

Thus, in October 2015, Supergirl took flight on CBS with Glee’s Melissa Benoist as the titular Girl of Steel. Even though it (initially) aired on a different network, it was considered part of its CW brethren’s universe because The Flash’s second season had established the concept of the multiverse. Toward the end of Supergirl season 1, Gustin’s the Flash, who resides on Earth-1, zoomed over to Supergirl on Earth-38 for a breezy team-up. “Grant and Melissa are just so effervescent,” Schechter says. “It wasn’t calculated. It was a very pure, creative desire [of] wishing we could see them together.”

At the time of Supergirl’s launch, the producers were also developing the time-traveling drama DC’s Legends of Tomorrow, which starred lovable screwups collected from the ranks of Arrow and The Flash, including Caity Lotz (Sara Lance/ White Canary), Brandon Routh (Ray Palmer/the Atom), and Dominic Purcell (Mick Rory/Heat Wave). Whereas the previous three series had a traditional development process, Legends didn’t even have time to make a pilot. “We literally just did clips from our other shows that we hadn’t used, and we shot two days of just like, ‘Wouldn’t this be cool to see all of these characters onscreen at the same time?’” says Berlanti.

That year’s Arrow-Flash crossover, titled “Heroes Join Forces,” had the responsibility of setting up Legends, which proved more stressful than the producers anticipated. “That’s when things got really crazy because even though we were only crossing over two shows, we were doing a singular storyline, but we were also introducing the Legends characters and launching Legends at the same time we were prepping the Legends [premiere],” says Guggenheim, who is also an EP on Legends. “I remember Greg and I looking at each other going, ‘No one has ever done this: Crossed over two shows and setup a third all at the same time.’ It was like juggling flaming chainsaws while atop a unicycle. We were like, ‘And no one will ever know how hard this is.’”

In 2016, Supergirl leaped over to The CW for its second season, further integrating into the Arrowverse via the three-part crossover “Invasion!” and a musical episode on The Flash, the latter of which is one of Guggenheim’s favorites even though he wasn’t directly involved in it. “I loved it,” he says. “These crossovers exist along a spectrum and I have to say just as a fan, one of my favorite types of crossovers is when we just crossover one or two actors, or one or two characters, like when Diggle and Lyla show on Flash, for example. Doing those repeatedly over the course of various shows and various seasons, that is what makes the universe feel lived in to me and just conceptually my favorite thing to do.”

With four superhero shows on the air, the showrunners made a concerted effort to differentiate them all. “If you look back on that particular season that year, you’ll see Legends became wackier, Supergirl went more in on aliens, Flash went more in on science, and Arrow went more in on gritty crime,” says Guggenheim.

Having Supergirl on The CW also led to what Guggenheim calls the “gold standard” of their annual crossovers: 2017’s “Crisis on Earth-X,” which spanned all four shows and included two weddings, Nazi doppelgängers, and more than 15 superheroes. “That was one of the craziest things I’ve ever done,” says Benoist of appearing in a scene with every Arrowverse hero. “That particular moment is one that is going to stick with me forever, because I think we all felt it.”

The producers knew pretty early on that they wanted the heroes be the villains in “Earth-X”; however, the idea of going with Nazis doppelgängers came from Freedom Fighters, an animated show set on Earth-X that Guggenheim was developing for CW Seed at the time.

“It made sense to just organically play with the toy you already have,” he says. “That’s another element of universe building and universe creation: A lot of the ways you create inter-connectivity in your universe is, you always ask yourself, ‘Am I reinventing the wheel or is there a piece on the chessboard that is already in play that I can use?’” He continues, “In the case of Earth-X, Earth-X was something that was already introduced in an animated series that’s in canon in our universe. So why not make use of it in this doppelgänger idea that we had for the crossover?”

The Arrowverse’s multiversal fight against super-powered Nazis, however, took a toll on everyone involved. “It killed all of us. We were feeling the effects of it literally a year after,” says Guggenheim. “The network had to really, really convince us to do another crossover because after ‘Crisis on Earth-X,’ we were all pretty burned out. We were like, ‘Can we take a break and then come back for Crisis on Infinite Earths?’ And The CW was like, ‘No, no, don’t worry. It doesn’t have to be all four shows. It can only be three hours.’”

And that’s how we ended up with the ambitious “Elseworlds.” Ironically, the topsy-turvy “Elseworlds” ended up being Amell, Gustin, and Benoist’s favorite crossover up until that point. “Everyone was just laughing all the time, and there was just so much comedic relief to it,” says Benoist. “Elseworlds” also marked Ruby Rose’s Batwoman debut ahead of her show’s fall 2019 launch.

All of this has been building toward the 2019 crossover: “Crisis on Infinite Earths,” which will unfold across Supergirl, Batwoman, The Flash, Legends, and the final season of Arrow. Chronicling a fight to save the multiverse, the Homeric table is an ode DC Comics’ past and present as it features the return of Smallville’s Tom Welling and Erica Durance as Clark Kent and Lois Lane, and will also introduce Black Lightning’s Cress Williams, whose Berlanti-produced show has remained separate from the Arrowverse since its 2018 premiere on The CW.

Says Guggenheim: “My main goal has always been, ‘How do we honor the original Crisis on Infinite Earths?’ I think we’ve crafted something really, really special.”

“Crisis on Infinite Earths” kicks off with Supergirl on Sunday, Dec. 8, followed by Batwoman on Monday, Dec. 9, and The Flash on Tuesday, Dec. 10. After the winter hiatus, the crossover will resume Tuesday, Jan. 14, with Arrow at 8 p.m., and conclude with Legends of Tomorrow at 9 p.m.

Pick up your copy of EW’s Ultimate Guide to the Arrowverse on newsstands now, or buy it online.