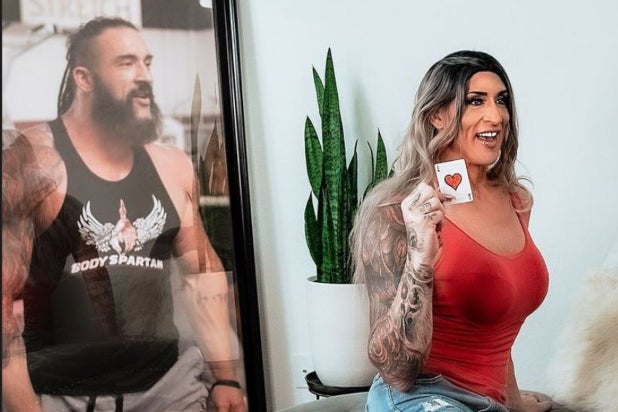 Gabbi Tuft, right, poses next to a photo of herself pre-transition. Photo: Gabbi Tuft/Instagram

Tuft announced her coming out in a series of Instagram posts Thursday, including one which showed her sitting in front of a photo of herself from her WWE days. “This is me. Unashamed, unabashedly me. This is the side of me that has hidden in the shadows, afraid and fearful of what the world would think; afraid of what my family, friends, and followers would say or do,” Tuft said. “I am no longer afraid and I am no longer fearful. I can now say with confidence, that I love myself for WHO I am.”

Tuft used the name Tyler Recks to compete in WWE, including worldwide tournaments like WWE SmackDown, Raw and WrestleMania. She made her professional debut in 2007 and competed as a heel in the ECW’s heavyweight class. She retired from wrestling in 2014 to spend more time with her wife, Priscilla Tuft and their young daughter. Shortly after she retired, Gabbi and Priscilla created fitness and bodybuilding company Body Spartan, which they still run together.

Tuft’s coming out was supposed to be revealed in an exclusive interview with Extra this evening, but TMZ broke the news early yesterday. Tuft will still sit down with Extra’s Billy Bush at 7 p.m. PT today for an exclusive interview to discuss her coming out journey alongside her wife. The couple said they are ready to share their story and are “willing to help” people in the LGBTQ community who are “dealing with challenging transgender issues.”

“She has finally been set free and is ready to rule the world,” a press release about Tuft’s coming out said. “This is a persona (she) has been hiding in the loud silence of (her) soul since childhood.”

“The previous eight months have been some of the darkest of my entire life. The emotional turmoil of being transgender and having to face the world has almost ended me on multiple occasions. However, the day I stopped caring about what other people thought, was the day I truly became limitless and allowed my authentic self to come into the light. My loving wife, family, and closest friends have accepted me for who I am. To them, I am forever grateful. Your support along the way means more than you will ever know. I don’t expect everyone to agree or understand. It’s not my place to change any of your core beliefs. Just know that the outer shell may change, but the soul remains the same. I know that many of you have questions and, as I have promised, they will all be answered. Tomorrow, on Extra, my interview with Billy Bush airs worldwide. I have included a link in the bio to this interview along with my personal coming out video that explains everything (waiting for Instagram to approve my name change and update the bio – please see my story for the link in the meantime). I promise to always be transparent and truthful with my journey, and to be a light to those that are in need. This is me.”