Gina Carano Reveals Why She Hates Her 'Mandalorian' Stuntwoman

Gina Carano plays a mysterious character on Disney+’s Star Wars series The Mandalorian. Even at an early preview of the series, Disney did not show any scenes involving Carano’s character, Cara Dune. She only appeared in that one brief shot during the trailer. 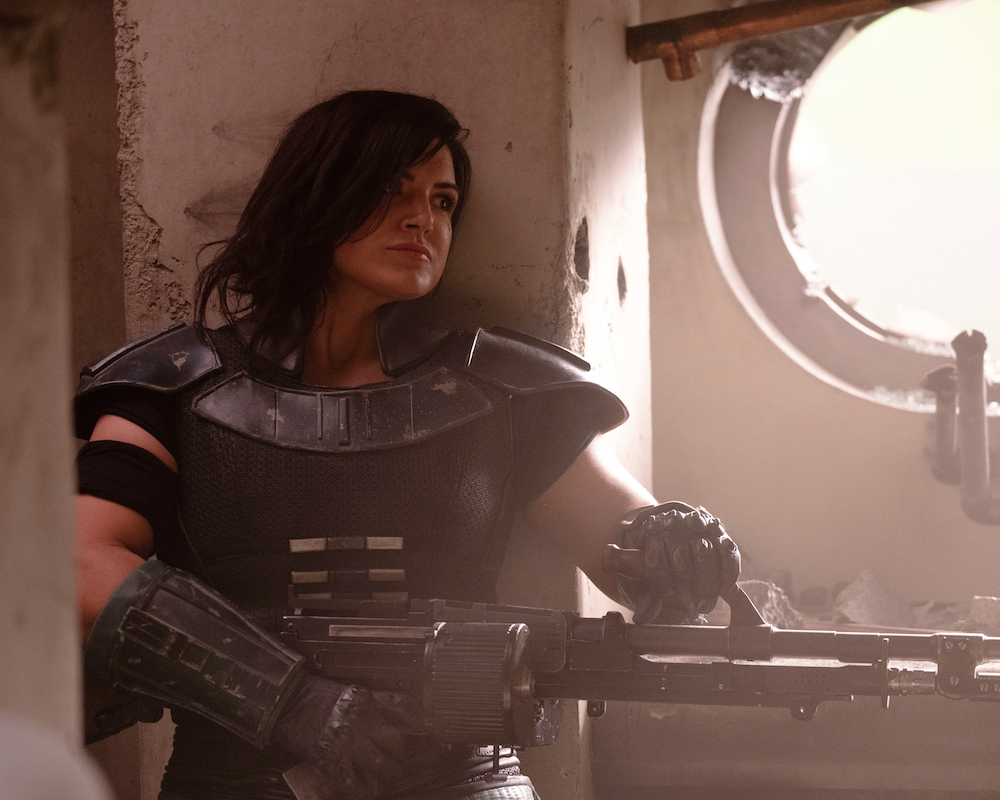 Carano was part of a panel to discuss The Mandalorian though. Although she could not reveal any details about Cara Dune, Carano gave some insight into what it’s like playing her and working on a Star Wars series for Disney’s streaming service. The Mandalorian premiers Tuesday, November 12 when Disney+ launches.

Gina Carano is very possessive of her ‘Mandalorian’ character

Gina Carano wanted to be the only one to play Cara Dune. Even when there were stunts to perform, she didn’t want any stunt doubles putting on her costume. And why should she? Gina Carano is a former MMA fighter who’s done plenty of action movies. She doesn’t need anyone else’s help.

“I did not want it to be anybody else in this Cara Dune costume,” Carano said. “Oh, is she running? Okay, I’ll run. That’s fine, no, we don’t need her [the stunt double]. I really hated anybody that was in this costume. I didn’t want to share at all.”

Pedro Pascal plays The Mandalorian himself. In every image released from the show, he is covered head to toe in armor. Pascal was happy to let the stunt doubles take over.

“Stunt doubles are essential to every large production just so you know,” Pascal said. “Even for the strongest people or agile ones, nothing can get done without the incredible stunt work.”

Gina Carano may be a superstar in the MMA or action world, but Pascal thinks everyone behind the scenes on The Mandalorian is a star.

“You have no idea the amount of star power from every department that goes into making something like this, from the person that is working on the shine of my shoulder to the person building the ship that we’re shooting on or the whole set. I’ve seen some pretty big sh*t and I haven’t seen anything like this. Yeah, there’s stunts, thank God.

Star Wars is full of creatures and ships so Gina Carano could describe one without giving anything away.

Gina Carano may have been possessive of her Cara Dune costume, but it was looking around and seeing all her costars dressed up as Star Wars characters that transported her into the galaxy far, far away.

“It really honestly was one of my favorite unforgettable moments being on set, seeing the other cast members whether it be behind a helmet or a creature,” Carano said.

Cara Dune even impressed the people who created her, Jon Favreau and Dave Filoni.

“Jon and Dave came [to set],” Carano said. “They made such a big deal out of ‘Oh my gosh, look how great you look.’ I was like wow, this is really great, but then I saw they did that to everybody and I’m like, ‘Oh, so you do that to everyone? Okay.’”