Home » TV & Movies » Golden Globes: Here's All the Shade Thrown at HFPA Over No Black Members

Golden Globes: Here's All the Shade Thrown at HFPA Over No Black Members

“It is great to be Black…back, at the Golden Globes,” Sterling K. Brown says 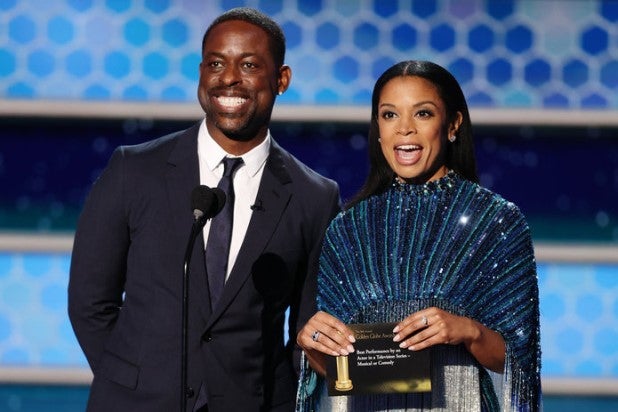 It’s not uncommon for awards winners to get political in their speeches, but this year a lot of presenters and winners took swipes at the Golden Globes themselves, calling out the Hollywood Foreign Press Association for not having a single Black member in its ranks.

The jokes started out early, with co-host Tina Fey blasting the HFPA’s “around 90 international no black journalists.”

Amy Poehler then added, “We say around 90 because a couple of them might be ghosts.”

Earlier this week, Time’s Up led Hollywood in criticizing the HFPA after the Los Angeles Times reported that none of the organization’s 87 members are Black, despite the push for diversity in Hollywood since the #OscarsSoWhite campaign launched in 2015. Hollywood bigwigs like Ava DuVernay, Judd Apatow and Shonda Rhimes joined in posting statements calling for more diversity, leading the organization to voice a commitment to diversify.

On Sunday’s show, HFPA member Helen Hoehne said on stage, “Tonight, while we celebrate the work of artists from around the globe, we recognize that we have our own work to do. Just like in film and television, Black representation is vital. We must have Black journalists in our organization.”

HFPA president Ali Sar added, “That means creating an environment where diverse membership is the norm, not the exception. Thank you and we look forward to a more inclusive future.”

Though he didn’t mention Black members specifically, Dan Levy said during his acceptance speech for “Schitt’s Creek” why diversity even on awards show is so crucial.

“In the spirit of inclusion I hope that this time next year the ceremony reflects the true breadth and diversity of film and television being made today, because there is so much more to be celebrated,” he said.

Jane Fonda, in accepting her Lifetime Achievement Award, echoed that sentiment, talking about how shows like “Ramy” and films like “Judas and the Black Messiah” have opened her up to new perspectives. “Stories they really can change people. But there’s a story that we’ve been afraid to see and hear about ourselves in this industry. The story about which voices we respect and elevate and which we tune out. The story about who’s offered a seat at the table and who is left out of the room,” Fonda said. “So let’s all of us — including the groups that decide who gets hired and what gets made and who wins awards — let’s all of us make an effort to expand that tent so everyone rises and everyone’s story has a chance to be seen and heard.”

She continued: “Doing this simply means acknowledging what is true, being in step with the emerging diversity that is happening due to all those who marched in and fought in the past and picked up the baton today. After all, art has always not just been in step with history but lead the way. So let’s be leaders.”