Home » TV & Movies » Golden Globes TV Snubs and Surprises: ‘Bridgerton’ and ‘I May Destroy You’ Out, ‘Ratched’ In

Golden Globes TV Snubs and Surprises: ‘Bridgerton’ and ‘I May Destroy You’ Out, ‘Ratched’ In

The Golden Globes are reliably unreliable, in that the Hollywood Foreign Press Association always finds surprising nominees to elevate, year after year. 2021 proved no different, as a slew of unsuspected inclusions wowed early morning onlookers and provided cheery wake-up calls to plenty of Hollywood players.

Of course, those surprises work both ways, and the 2021 Golden Globes also carried their fair share of snubs. Now, as IndieWire establishes every awards’ morning, a “snub” in this context does not imply any purposeful exclusion; the below snubs are not shows on the HFPA’s hit list, they are notable programs that were either overlooked or couldn’t muster enough support to make the final cut.

Still, the Globes did see some unfortunate patterns persevere. A shocking six out of the eight TV acting categories don’t feature a single person of color, and a number of acclaimed series from Black creators or featuring Black leads were shut out, including “Bridgerton,” “I May Destroy You,” and “P-Valley.” (Last year, TV juggernauts “When They See Us” and “Watchmen” were also snubbed.) For more on this year’s exciting and questionable choices, check out the list below.

Netflix broke its record for total nominations this year, landing 42 slots across film and television after snagging 34 in 2020. Twenty of those came from TV, even more than the 17 it snagged last year, and plenty of people will cite the pandemic’s isolating effects as reason for a spike in Netflix numbers — but as you can see, things were trending this way already, at least at the Globes: Netflix had just 13 nominations in 2019, before a huge spike last year.

All that being said, one of the streamer’s crown jewels still couldn’t break through. Many thought the recent release and friendly reviews would bolster “Bridgerton” into several TV races, but it was not to be. Call it stiff competition, a preference for many other Netflix shows, or… something else, but any way you slice it, the buzzy period drama was quieted for the first time this morning.

“I May Destroy You” blanked

On a tough morning for HBO (the network’s nomination tally dipped from 15 in 2020 to seven in 2021), its most critically acclaimed limited series was kept off the Golden Globes’ ballot sheet. Clearly, reviews aren’t a deciding factor for the HFPA, but this British co-production broke out in the summer, driving creator and star Michaela Coel to a new level of stardom. Alas, she and her excellent series will have to wait and see if the SAGs are kinder.

“What We Do in the Shadows,” “Mrs. America” falter for FX

While FX’s sister streamer did well — Hulu saw its nominations rise from five in 2020 to seven in 2021 — the critics’ favorite network couldn’t muster more than a single slot, and that’s technically for an FX on Hulu series, “Mrs. America.” Not only that, but Cate Blanchett’s lone nomination is far less than anyone was hoping for, as the well-received limited series was shut out of the other races (including Best Limited Series and Supporting Actress). Perhaps even more upsetting: This year’s new Emmy darling “What We Do in the Shadows” couldn’t conjure the same magic with the HFPA. Jemaine Clement’s exquisite horror-comedy landed zero nominations, and during the week of the Superb Owl, no less!

Amazon Prime Video’s “The Boys” switched to a weekly release for Season 2, garnered even more glowing reviews, and got a huge awards push from its deep-pocketed strearmer… all to no avail, at least at the Globes. Drama Series was definitely up for grabs, and Anthony Starr was a Best Actor dark horse, but Netflix’s dominance pushed out any other options. The cast and crew have to be a little peeved, so all whales should be on the lookout for the next few days.

“Lovecraft Country” lands one big nomination, but nothing for its stars?

One big bright spot for HBO: “Lovecraft Country” made its way into the Best Drama Series race. But where’s the love for Jonathan Majors and Jurnee Smollett? The two leads of “Lovecraft” earned raves, week after week, Majors was riding high on “Da 5 Bloods” (which was also snubbed) and Smollett has been building acting cred for years, waiting for this moment. Both were more than deserving, and with Season 2 not yet renewed, we don’t know when we’ll get to see the duo together again.

Another top-quality HBO film, another year of snubs at the Golden Globes. Following last year’s unforgivable omission of “Deadwood: The Movie,” the HFPA again excluded great film work in favor of limited series, blanking “Bad Education” despite its impeccable star turn from Hugh Jackman. Not a single nominee in all three Limited Series or TV Movie categories included a nod for any TV Movie. It’s just one more reason they should be treated as films, sans modifier, and categorized with their “big screen” peers. 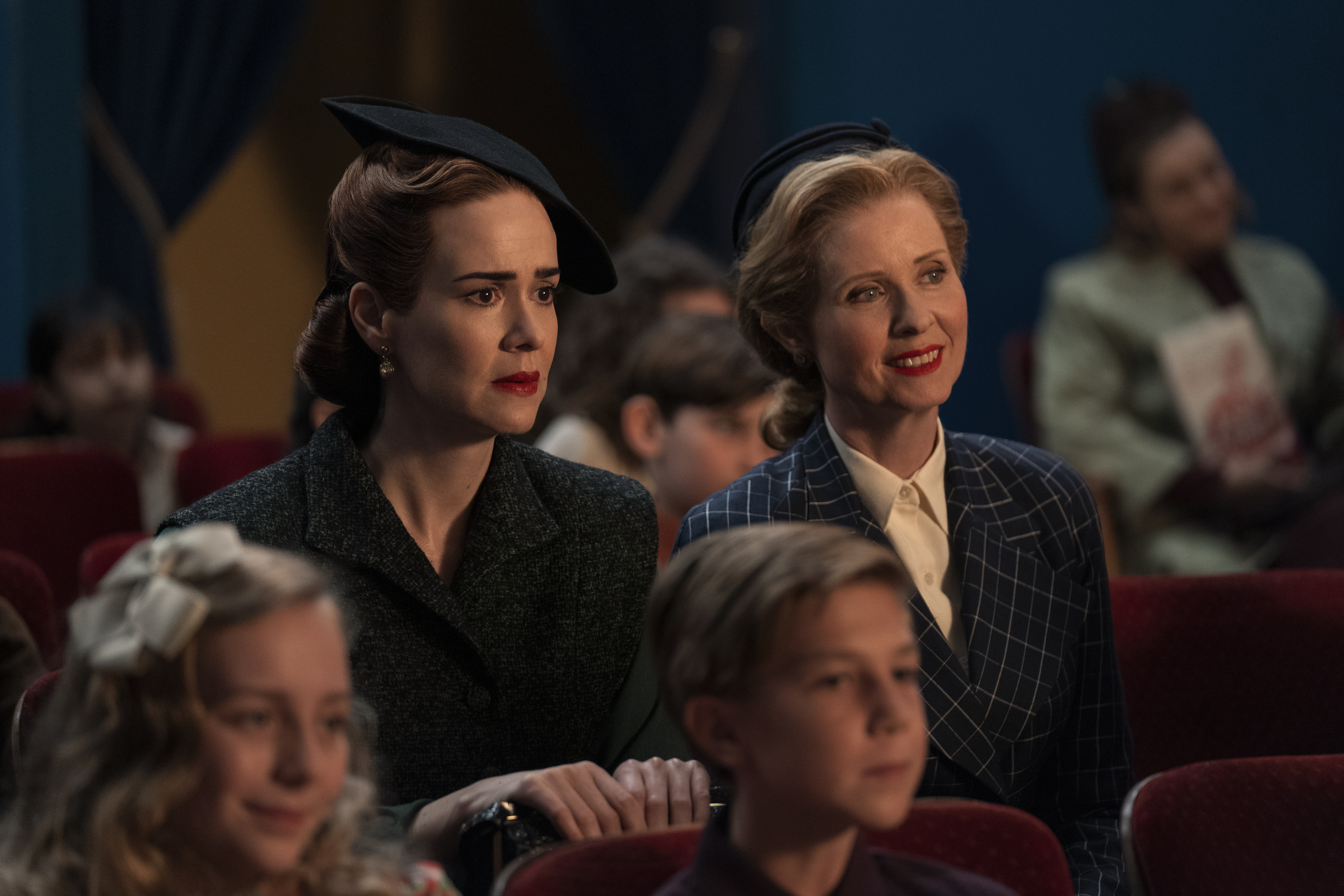 Just a few months before one of the most heated national elections of all time, there was one thing just about everyone could agree on: “Ratched” was a huge disappointment. So leave it to the Hollywood Foreign Press Association to laugh in the face of America’s single shared connection and nominate the soapy, silly, Ryan Murphy drama for not one, not two, but three Golden Globes. “Ratched” pushed out “Perry Mason,” “The Boys,” and “Bridgerton” to get a Best Drama Series nod, while star Sarah Paulson was chosen over Jurnee Smollett and “P-Valley’s” Brandee Evans, and Cynthia Nixon beat out a truly incalculable number of contenders in the Best Supporting Actress race (which is open to dramas, comedies, limited series, and TV movies). Given the HFPA’s love for Murphy’s Netflix movie “The Prom,” including an absolutely stunning nod for James Corden, it seems this year the biggest statement they wanted to make was that they’re right and everyone else is wrong. Have fun with that, fellas.

Plenty saw a nod coming for “Emily in Paris” star Lily Collins, but few predicted it could scale the mountain of Best Comedy Series. The series’ two nominations speaks to how important popularity was to the HFPA this year, as shows like “Emily in Paris,” “Ratched,” and “The Undoing” all performed well despite mixed to negative wide reactions. Even shows that didn’t used to register with the HFPA — like “Schitt’s Creek” — got a bunch of nominations, which speaks to an age-old issue with the HFPA that apparently isn’t ending any time soon.

The premium cable network has a good track record with the Golden Globes, as their brand of original programming continually speaks to the preferred sensibilities of voters. This year, it happened again, as both stars of “The Comey Rule” (Jeff Daniels and Brendan Gleeson) earned nominations (in a very competitive category), as did Bryan Cranston for “Your Honor,” Don Cheadle for “Black Monday” (his first nod), and Ethan Hawke for “The Good Lord Bird.” It’s actually a bit surprising one of those limited series didn’t make it into the program race, but these are still more nominations than the network could’ve banked on. Impressive.

“Small Axe” comes through, as TV

With Steve McQueen’s “collection of film films” landing on both TV and film Top 10 lists (and causing plenty of Twitter fervor over where it belonged), there was a big question as to whether formal voting bodies would accept Amazon Prime Video’s designation. Well, so far, they’re one for one. The HFPA recognized “Small Axe” in the Best Limited Series category and gave John Boyega a nod for Best Actor in a Limited Series, officially slotting it as TV and setting the series up for a long TV awards run (where it belongs).

Hulu’s spring sensation could’ve gone the way of “I May Destroy You” and “Mrs. America,” as early to mid-year titles that lost steam before the Golden Globes, but the HFPA stuck by its Irish favorite. Sally Rooney’s adaptation of her own novel landed nominations for Best Limited Series and Best Actress in a Limited Series for Daisy Edgar-Jones. Paul Mescal missed out, but he got an Emmy nod when Edgar-Jones didn’t, so as of now, they’re effectively even. Which is nice.