Remember when Greg Grippo broke up with Katie Thurston on The Bachelorette and fans were simply not okay? Me neither because there have been approximately 8,000 more dramatic Bachelor Nation moments that have happened since then, but it was a whole thing. And now Greg’s opening up about why he left the show when he and Katie seemed to have such good chemistry.

“It felt, like, a little too scripted,” Greg said on the We Met at Acme podcast, via Us Weekly. “And felt like, ‘Alright, we need to play by [the rules]’—I had no problem going into, like, the fantasy suite and there being two other guys there. I wasn’t looking for the show to end. I wasn’t at all. I wanted us to communicate on a mutual level in those moments.” 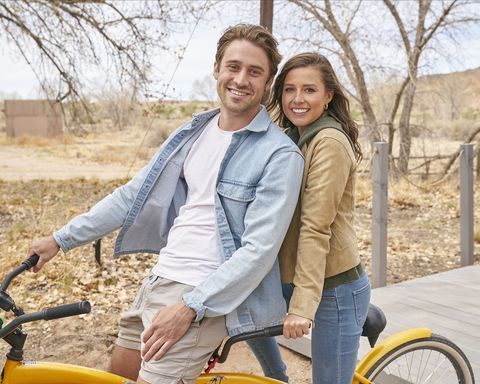 He later noted that, “This is also the rest of my life. And if this is going to be the person I marry, I want it to be completely real. And, like, yeah, I want to show my family after and be like, ‘Look that we accomplished, look at what we went through.’ That’s one of the hardest things, I feel like, to make it out of the mud with someone, you know, [on] that damn dating show.”

Ultimately, Greg says he thinks their feelings were “real” but that Katie had stronger feelings for Blake Moynes—who she ended up engaged to (though they later broke up). Either way, Greg has completely moved on: “That chapter’s closed,” he said. “I don’t mean that in any harsh way. But just, I’m just at another point in my life. And I don’t think we’re right for each other anyway.”