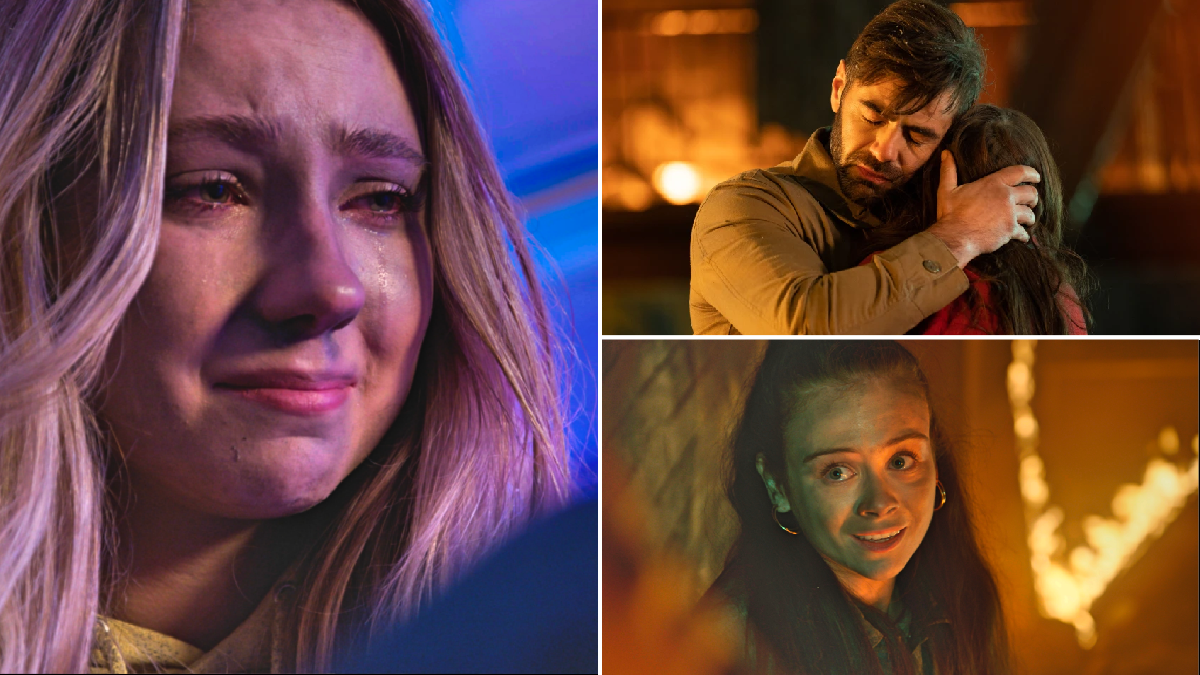 Hollyoaks fans are eagerly anticipating the show’s explosive stunt episode, which will see the Salon De Thé blown to smithereens, with a number of characters still inside.

The hour-long outing, airing Tuesday (January 11), is the Channel 4 soap’s first real stunt since the pandemic, and it’s not one to be missed, with plenty of favourites’ lives on the line.

You’re no doubt dying (sorry) to know who dies, and while we can’t reveal that just yet, Metro.co.uk has an exclusive first look at the devastation to come, with brand new spoiler pictures teasing what happens.

Mercedes finds herself in the blast radius, as does Cher, but – despite the pair’s history – she does whatever she can to save her stepdaughter.

Sylver (David Tag), meanwhile, is present in the aftermath of the rescue mission, as he can be seen cradling love of his life Mercedes in his arms.

What’s more, he also shares a heartfelt moment with daughter Cher outside Dee Valley hospital, as she is tended to following her near-death experience.

Is this confirmation that the three characters in question make it out of the explosive edition of the serial drama alive?

But will their be blood on his hands?

Juliet Nightingale (Niamh Blackshaw), meanwhile, is also in danger, as she decides to propose to girlfriend Peri Lomax (Ruby O’Donnell).

Peri’s answer is unknown, but the duo are thrown into a devastating situation when they’re caught in the explosion.

Afterwards, Peri ultimately realises what she wants, but will her happy ending be obtainable? Or will Juliet die?

Spoilers have already indicated that she is rushed into surgery following the catastrophe at Marnie’s (Lysette Antony) patisserie but will she make it out alive?

Peri can be seen above looking incredibly emotional – will her beloved Juliet die?

Elsewhere, Celeste and Toby are also caught up in the tragedy, and new images see Felix Westwood (Richard Blackwood) assisting his daughter out of the burning building.

But what of Toby? Has he perished?

The killer is thought to get his comeuppance for Lisa Loveday’s (Rachel Adedeji) murder during this particular instalment, but does that mean he will die?

Marnie, meanwhile, finds herself growing closer to Jack Osborne (Jimmy McKenna), as they discuss things while trapped in the burning Salon.

It is currently unknown as to who will perish in the blaze, but one thing is for sure: this is going to be a day that the residents of Hollyoaks never forgets.

Or the viewers, for that matter!

Speaking about the stunt, Hollyoaks’ boss Lucy Allen told Metro.co.uk: ‘Channel 4 have really backed us and given the challenge of the hour long so very early on in the year and that event will galvanise the stories moving on. It’s a big driver for the year.’

‘It’s agonising!,’ she added, discussing how difficult it is to decide who to kill off.

‘We sit in a writer’s room, all of us and it’s such a difficult decision to see who you won’t keep.

‘But I also think it’s really important to recognise that some of the most iconic characters in soap are the ones who aren’t there anymore and are remembered for their amazing exit storylines.

‘Look at Ricky Whittle, who played Calvin and where he is now. I killed him many moons ago and that was a really difficult choice to make – it works both ways.’