Jason Watkins can understand parent bereavement in The Catch 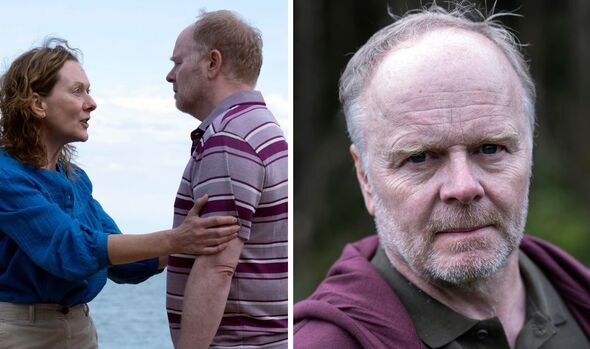 Channel 5’s upcoming four-part series The Catch focuses on a local fisherman and his wife who are continuing to deal with the death of their son years later. However, things in the show take a sinister turn when Ed feels threatened he’ll lose another child to their new partner.

Jason Watkins is set to star in the new series In The Catch, which is based on the best-selling novel by T.M. Logan.

Although the main storyline focuses on his character Ed, trying to uncover the truth about his daughter Abbie’s (Poppy Gilbert) new boyfriend Ryan (Aneurin Barnard) and the web of lies that unfold afterwards, there are also themes of grief throughout.

In the four-part crime drama, Ed and his wife Claire (Cathy Belton) are continuing to deal with the death of their son Josh (Jacob Hickey), for which Ed blames himself.

Exclusively speaking to Express.co.uk and other publications, Jason Watkins touched on why he decided to take on the role following the death of his own child.

In 2011, Jason and his wife Clara tragically lost their two-year-old daughter Maude who died from sepsis.

Speaking about parent bereavement, he said: “We (the character’s in the show), as I as a family, have lost a child so I understand very much Ed’s feelings and the relationship.

“One of the reasons I wanted to take it on was because I thought it was so well mapped out.

“It was something one could connect with the audience and help them understand about bereaved parents and what they go through because this was so well-written.”

Jason revealed he and his wife Clara try to help families reconcile what they’ve gone through when dealing with a death of a child and try to help them carry it instead of burying what’s happened.

He continued: “I do a lot of that, talking to fathers about not burying what has happened and being able to talk about it.

“Not only is this (The Catch) a process that had a little bit of that about it, sharing and talking to the public.

“But, between our characters, it was Clare trying to get Ed to be emotional about things, talk about things.”

Although the actor teased emotions pop up in glimmers for his character in the Channel 5 show, his judgement is all over the place following what’s happening in their lives.

Jason added: “Their lives have been destroyed by the violence, the financial issues, by their daughter leaving and not being able to reconcile the past.

“He’s got to try and come to terms with those things otherwise they will destroy him more than external forces.

“So, it’s all that going on which I think is so exciting for audiences, all those complex things and yet you’re carried on a really great journey in terms of a thriller.”

In the first episode of the series, fans can expect to see the fisherman struggle to keep his head above water after a rival steals his business.

Things go from bad to worse for Ed when his daughter decides to bring her new boyfriend home, although something about him makes Ed immediately suspicious.

Wanting to get to the bottom of his off feeling about Ryan, he teams up with his daughter’s ex to dig into the new boyfriend’s past but is left alarmed by the truth that’s uncovered

The Catch starts Wednesday, January 25 on Channel 5 from 9pm.